Violence or nonviolence: That is the question

The participation of Israelis in nonviolent actions has sent a powerful message to many Palestinians, showing solidarity and support. 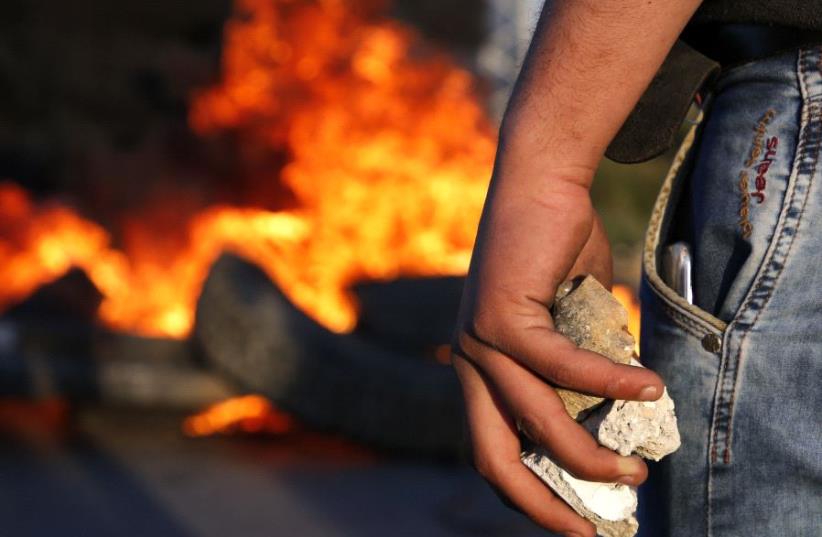 A Palestinian protestor hold stones during clashes with Israeli security forces following a protest in support of Palestinian prisoners on hunger strike in Israeli jails, near the Jewish settlement of Beit El, north of the West Bank city of Ramallah on April 24, 2017
(photo credit: ABBAS MOMANI / AFP)
Advertisement
To promote and defend nonviolence as a tool for social change and conflict resolution has never been easy, especially in the Middle East. NOVACT, the International Institute for Nonviolent Action, has been involved in a controversial and disruptive campaign for peaceful alternatives in Israel and Palestine.Many in Israel, Palestine and neighboring countries have been living with conflict for decades. Violence has been used and is being used by various actors, at various levels, including non-state and state actors. In violence and war, wherever they take place, all the actors involved use, compel the use of, provoke or introduce a perverse dynamic: those directly or indirectly affected by war and violence are given a concrete label, with the aim of distinguishing between “us” and “them,” between the “good guys” and “bad guys,” “our side” and “the enemy.” Indeed, violence is a destructive manifestation of duality.Some actors portray themselves with such labels, while others have labels imposed on them, whether they correspond with reality or not. None of this is new, but in the “post- truth era” – as Ralph Keyes calls contemporary dynamics – it becomes more intense and causes more confusion. The “label system” spreads and becomes difficult to escape. It can also push people into uncomfortable or even risky situations, and sometimes these labels are false. A great challenge is to dissolve these labels and put aside masks or harmful generalizations, as well as exaggerations of real identity, no matter if we are talking about Israelis, Palestinians, Jews, Christians or Muslims.We must decide: what do we do with these labels? Do you use them for generating violence or go beyond them to recognize real people with their potentials and limitations, which will allow the isolation of violent actions and strategies? We have all experienced at some point in our lives how ineffective it is to attack violence with violence, no matter if we are talking of direct violence, cultural violence or structural violence, as Norwegian sociologist Johan Galtung or American professor of international peacebuilding John Paul Lederach define them.The participation of Israelis in nonviolent actions has sent a powerful message to many Palestinians, showing solidarity and support. Nonviolent initiatives by Palestinians also send a powerful message to Israelis. Unfortunately, for the most part nonviolent actions protesting against violence remain marginalized within Israel or Palestine, with leaders and participants labeled as extremists by their own communities. In some cases they are labeled traitors or even as terrorists by large portions of the population. Israeli and Palestinian women’s marches for peace are a powerful example. These initiatives are doubly marginalized and ignored: they are carried out by women and considered ineffective. But these women are willing to recognize the people beyond the labels, knowing the cost of conflict all too well as most of them have lost an immediate family member.Preparing the Israeli and Palestinian publics for cultural acceptance of nonviolence and peaceful efforts to overcome violent conflict is important. Many actors support those creative movements pursuing this goal, of which NOVACT is one.Speaking of labels, a recent article in The Jerusalem Post titled “Report: European states fund NGOs that incite to violence against Israelis” presented an inaccurate portrayal of NOVACT.The article was based in part on reports by NGO Monitor and presented NOVACT as “one such organization that whitewashes resistance” and as one of a group of “several European-funded NGOs that use the façade of human rights and international law to blur the lines between peaceful or nonviolent campaigns and violent resistance.”This information is simply false; NOVACT has worked for more than 20 years to confront all forms of violence. NOVACT does not support any form of violence in any part of the world.The article affirms that NOVACT “in 2015 received some €1.3 million in funding from Spain, the UN and the EU for activities related to the Palestinian-Israeli conflict.” This is aslo false: the overall audited budget of NOVACT in 2015 was €1.1m. for its work all across the Euro-Mediterranean region.The article affirms that “Both [Munther] Amira and [Manal] Tamimi [members of the Popular Struggle Coordination Committee invited to speak at a NOVACT conference in Barcelona] were arrested upon their arrival in Barcelona for suspected terrorist activities.” This information is false since: 1) Amira and Tamimi traveled to Spain to participate in the definition of a Euro-Mediterranean Plan of Action to Prevent Violent Extremism; 2) Amira and Tamimi were never arrested nor had problems with Spanish authorities; 3) Amira and Tamimi traveled to Spain on regular visas delivered by the Spanish consulate, and 4) in order to travel to Spain, Amira and Tamimi, who are residents of the West Bank, had to pass through Israeli border control. If the information published by the Post were true, they would have been arrested at the Israeli border and not in Spain.The information published in the article is partially based on an article published in the Spanish newspaper Intereconomía. After informing Intereconomía, the newspaper rectified the information and published a public apology to Munther Amira for having spread false accusations and information.We are grateful that the Post offered NOVACT the possibility to clarify the above. Violence or nonviolence continues to be the question. There is no doubt about the answer of some actors in the area, including NOVACT.

The author is president of NOVACT, the International Institute for Nonviolent Action.
Advertisement
Subscribe for our daily newsletter