Spurious attacks on Israel are a distraction from Sweden’s and Europe’s real challenge – dealing with a lawless and radicalized group of Muslims who see Europeans not as hosts but as enemies. 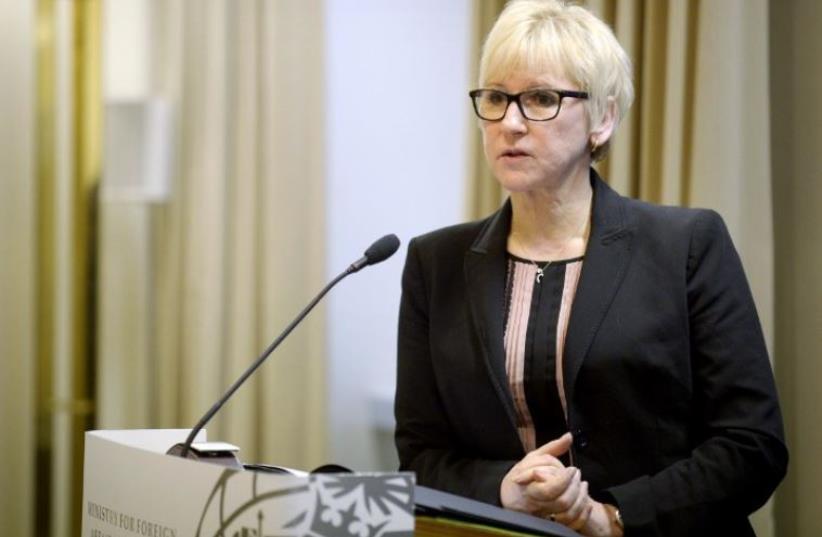 Swedish Foreign Minister Margot Wallstrom
(photo credit: AFP PHOTO)
Advertisement
Palestinians have run over, stabbed, shot, stoned and firebombed scores of Israelis since Rosh Hashana, when the present wave of terrorism is said to have begun. These attacks have been perpetrated overwhelmingly by “lone wolves” overwhelmed by an impulse to lash out at innocent Israelis.Let us be clear: All the attacks have targeted Jewish Israelis; though several Arab Israelis have accidentally been murdered as well. In all about 30 Israelis have been killed in these attacks and over 200 have been wounded.Throughout this period most European politicians have either remained silent about the violence or have attempted to portray both sides – Israeli and Palestinian – as equally to blame.But Sweden’s Foreign Minister Margot Wallstrom has outdone her fellow Europeans. On Tuesday she called for an investigation to determine whether Israel is guilty of extrajudicial killings of Palestinians during the current wave of terrorism.“It is vital that there is a thorough, credible investigation into these deaths in order to clarify and bring about possible accountability,” she said during a parliamentary debate, according to the Swedish news agency TT.Not only did Wallstrom ignore Palestinian violence directed against innocent Israelis – she blamed the victim.She had the chutzpah to claim that Israel’s desperate attempts to defend itself against Palestinian terrorism should in reality be considered “extrajudicial killings.”When a man or a woman pulls out a knife and begins stabbing people on a busy street or gets behind the wheel of a car and attempts to plow into pedestrians, there is no time to convene a court of justice and begin discussing the matter. There is time only to stop the assailant any way possible, often by overwhelming, deadly force. If this is extrajudicial killing, so be it.This is not the first time Wallstrom has articulated her distorted perception of the Israeli-Palestinian conflict. In November of last year she trotted out the old “linkage” argument that since the Arab Spring has fallen into disrepute.The radicalization of Muslims in France, Sweden and other parts of Europe, claimed Wallstrom, was a product of the conflict between Israel and the Palestinians.Wallstrom is right that the radicalization of Europe’s Muslims represents a major challenge for countries like Sweden as Europe absorbs hundreds of thousands of Muslim refugees. But the tiny minority of Muslims who resort to terrorism does not need to cite the Israeli-Palestinian conflict to justify their heinous deeds. They have a long enough list of grievances against Europeans as it is. Indeed, Wallstrom should be focusing on problems closer to home.Sweden’s Social Democrat foreign minister has rightly been praised for pursuing a “feminist” foreign policy, most famously by very publicly criticizing Saudi Arabia for its repression of women. Her outspokenness endangered the lively arms trade between the Swedes and the Saudis.She should pursue this feminist foreign policy closer to home as well, namely by combating the increasingly prevalent phenomenon of mass sexual assaults – known in Arabic as taharrush – committed by a small number of Europe’s Muslims against European women in German cities such as Cologne, Berlin, Hamburg, Bielefeld, Frankfurt, Düsseldorf and Stuttgart; in Austrian cities such as Vienna and Saltzburg; and in Sweden and Finland.The same basic “rape game” was repeated, especially on New Year’s Eve, but not only. A large group of Muslim men surround their victim, usually a Western woman or a woman wearing Western-style clothing. The men in the inner circle physically abuse the woman – including ripping off her clothes and groping her – the next circle is made of spectators while the outer circle distracts attention from what is going on.Do these men behave this way because they are desperate and are forced to resort to violence? Do they do it because of the Israeli-Palestinian conflict? Just as Wallstrom fearlessly called out the Saudis for their dismal treatment of women, so too should she fight misogyny in her midst. Spurious attacks on Israel are a distraction from Sweden’s and Europe’s real challenge – dealing with a lawless and radicalized group of Muslims who see Europeans not as hosts but as enemies.