Wanted: A plan for change

It’s just a matter of time before the next war in Gaza or the North breaks out. But there’s no chance that we will come out victorious since we have no strategy, initiative or clear plan of action. 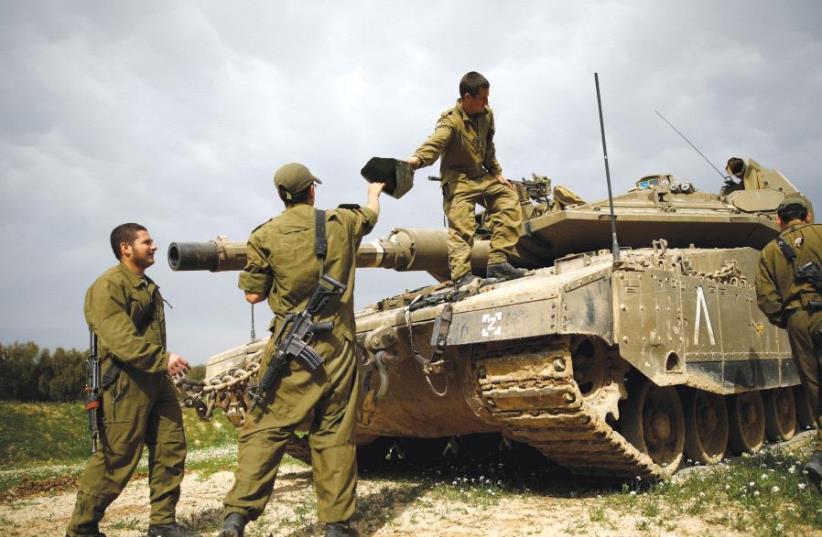 Soldiers are seen next to a tank, near the border with the central Gaza Strip last month
(photo credit: REUTERS)
Advertisement
The conclusions from the recent State Comptroller’s Report on the conduct of the military and government before and during 2014’s Operation Protective Edge have reignited the battleground between politicians and military officials.The most vocal individuals are retired senior military officers who have an eye on entering politics. The report did not bring to light any new observations, and Operation Protective Edge may have been a failure from beginning to end, but it is important to differentiate between fact and political noise.The most prominent and central failure was on the political front. The government did not internalize any lessons over the decade that preceded the operation. It failed to make improvements following any of the operations that came before it. Instead of carrying out assessments in real time and building long-term strategies, the government chose to bury its head in the sand and remain passive.The IDF had already engaged in seven operations in the Gaza Strip before Protective Edge: Rainbow and Days of Penitence in 2004, First Rain in 2005, Summer Rains in 2006, Hot Winter in 2008, Cast Lead in 2009 and Pillar of Defense in 2012. Almost all of the operations took place in response to bombing attacks on Israel or kidnappings carried out by Hamas.Throughout all these years, Hamas has never stopped rebuilding, building or reinforcing tunnels, rearming and improving its intelligence capabilities. Over time, it has made organizational changes: It divided the organization into regions and operational divisions, and commanders were appointed to oversee deployment, train forces and strengthen infrastructure.Huge amounts of cash, construction materials and weapons continue to flow into the Gaza Strip, and Hamas has never changed its underlying ideology, which calls for the total destruction of Israel and Palestine, and the creation of an Islamic caliphate.Operation Protective Edge might have been the most intense and expensive of the operations Israel engaged in; it certainly incurred the highest number of deaths and negatively affected our economy. Afterward, Israeli political and even a few military leaders declared that Israel had severely beaten Hamas and weakened its ability to wage war for many years. However, the reality is actually quite different.Just as in previous operations, Protective Edge began as retaliation for an attack by Hamas, not as an offensive attack filled with determination and decisiveness. It ended inconclusively and without any political or military achievements, just like all the previous operations.It is clear to everyone that the countdown to the next battle with Hamas has already begun.Everyone was aware of the fact that Hamas was digging tunnels before Operation Protective Edge. The IDF and the Shin Bet (Israel Security Agency) knew exactly how many tunnels crossed over the border into Israel from the Gaza Strip. In most cases, it was even known where the openings on the Gaza side were located.Everyone now knows that Hamas is digging more tunnels and booby-trapping them with vast quantities of explosives. In short, it is busy preparing for the next battle, which it will initiate at a convenient time.The next operation began the moment Protective Edge came to an end. Hamas has already remanned its observation posts and intelligence positions. It has even tried out a few of its new rockets by launching them into Israeli territory. Hamas commando units are closely watching Israeli settlements on the border.The Israeli government has never searched for solutions to its domestic problems or devised any longterm plans to deal with education, healthcare, the high cost of living, racism and personal safety. This same lack of planning can be seen in the defense sector and the fight against Hamas.In the South, Hamas continues to rearm as it watches Israel sit on its hands. In the North, Hezbollah also continues preparing itself for war, knowing that we have no strategy. And in Syria and Sinai, Islamist organizations are continually capturing new territory in their quest to form an Islamic caliphate. They rape women and chop off people’s heads, knowing full well that no one in the West is completely indifferent.The Israeli political leadership has not put together any kind of defensive strategy in the past decade. We’ve never initiated any type of offensive military attack against Hamas, and instead are satisfied with moderate and calculated responses to its attacks. While our mediocre politicians squabble over comptroller reports and plan their political trajectories, our enemies are actually preparing themselves for the next war.It’s just a matter of time before the next war in Gaza or the North breaks out. But there’s no chance that we will come out victorious since we have no strategy, initiative or clear plan of action. There will be more casualties, economic losses and declarations of victory on both sides.Although it works under difficult constraints, the Shin Bet brings extremely high quality intelligence, and the IDF knows how to fight and overcome its enemies. But without courageous political leaders who know how to give clear orders, nothing will ever change here.The writer is a former brigadier-general who served as a division head in the Shin Bet.Translated by Hannah Hochner.