Washington Watch: Vote the bums out

There’s much to be said for experience. Congress’s role as an equal branch of government is to make sure the executive carries out the laws and spends appropriated funds as intended. 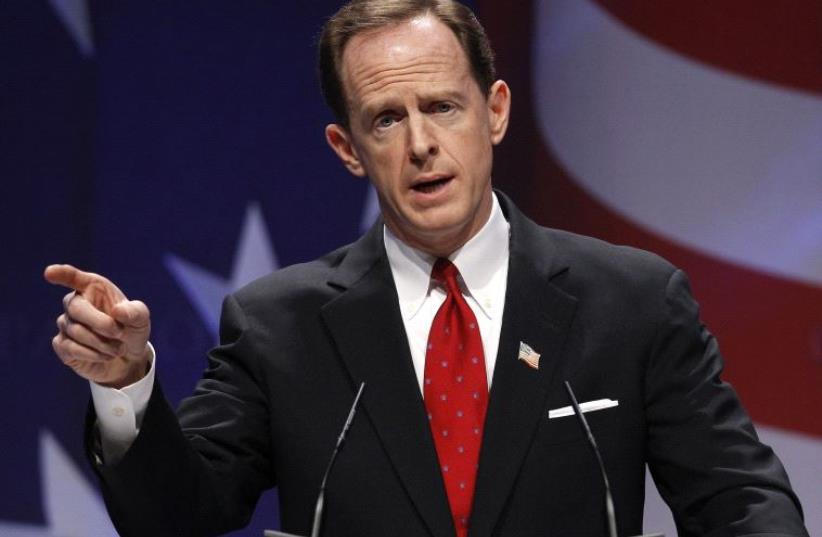 US Senator Pat Toomey
(photo credit: REUTERS)
Advertisement
Tom Steyer, the billionaire Democrat running for president, is making a major TV ad pitch for term limits. He sees it as an antidote for special interests making long-term investments in embedded lawmakers, insisting more turnover is essential.It makes sense for term-limiting the presidency, keeping one person from so dominating the apparatus and politics of government in order to hang on for life. Republicans pushed the 22nd Amendment after Franklin D. Roosevelt was elected to four terms. He lived only 82 days into his last term.Dwight Eisenhower and Ronald Reagan wanted it repealed, and Sen. Mitch McConnell has periodically sponsored legislation to do that. President Donald Trump is ginning up talk that he deserves a mulligan because the Democrats robbed him of his first term with investigations into his corruption and now impeachment.Former Arkansas governor Mike Huckabee says he’s been “asked to chair” the Trump 2024 campaign, though he didn’t say by whom.Steyer, however, has congressional elections in mind. He proposes three two-year terms for House members and two six-year terms for senators. It’s a bad idea, for reasons I’ll go into, but buried in Steyer’s proposals is a far better idea for limiting the corrosive influence of special interests: public financing of campaigns and a more muscular Federal Election Commission to enforce the laws and fight the abuses. Add full and prompt disclosure of funding and the need to ban lobbying by all former members of Congress (See John Breaux below) and selected senior staff.A record $5.7 billion was spent on congressional races in 2018, according to the nonpartisan Center for Responsive Politics. Look for that to go up next year in addition to even more spent on the presidential race.That’s a lot of money for a job that pays less than what most candidates are earning now, and for the chance to work in a city so many say they despise. Many of the challengers say they want to kick out the career politicians, serve briefly and return home to make way for more novices. You won’t be surprised to learn that once they get here they contract Potomac Fever and don’t want to leave.Like Pennsylvania Republican Sen. Pat Toomey. He ran on a two-term pledge and even sponsored a constitutional amendment to impose term limits, but now that he’s ending his second term, he’s having second thoughts. “I thought you were a term limit guy,” Chuck Todd asked him on Meet the Press. He responded, “Um, I have not imposed term limits on myself.”Congressional Republicans have toyed with the idea for years but actually came up with a good solution the Democrats should copy. They limit the time anyone can serve as chair or ranking member of a standing committee, forcing a rotation but not retirement. That gives more members a chance to share power and prevents anyone becoming so entrenched that federal agencies in their jurisdiction (Defense, Agriculture, Energy, etc.) become personal fiefdoms where they can wield too much power and create opportunities for abuse.There’s much to be said for experience. Congress’s role as an equal branch of government is to make sure the executive carries out the laws and spends appropriated funds as intended (See: Ukraine).The problem here is that too few lawmakers understand separation of powers, especially when their party also is in the White House. As was so apparent in the Trump impeachment proceedings, too many saw their job as protecting their errant president rather than the Constitution.Through its oversight function, the legislative branch is like quality control in a factory. That requires some expertise, not a revolving door. Experienced professional staff working with lawmakers who don’t see themselves as short-termers thinking about their next job are essential to maintaining the balance of power.And who is on the other side, facing the congressional rookies? Experienced lobbyists who know the ropes better than the legislators do (often because they used to hold the same jobs and are exploiting their experience and access), and an executive branch that can easily out-maneuver the neophytes.An experienced, well-informed legislative branch is the best protection against executive abuse. Congress is not a pick-up ball game. It’s the big leagues. And the American people need a good team, not just well-meaning amateurs and short-timers backed by millions of dollars in contributions from anonymous donors looking out for their own economic interests.This is not and should not be a partisan or ideological issue. The biggest problem with imposing term limits is that it strengthens the executive branch at the expense of the legislative. It violates the Founding Fathers’ concept of separation of power. It is a bad idea for conservatives as well as liberals and everyone in between.George Washington supported the two-term limit for president but thought it was a bad idea for the Congress. “I can see no propriety in precluding ourselves from the services of any man, who... shall be deemed universally, most capable of serving the public,” he wrote in a 1788 letter to the Marquis de Lafayette.Some proponents of limits argue that as incumbents attain power, they are better able to do favors for powerful contributors and groups. That is a real problem, but term limits are not the answer. The solution lies in restricting where legislators get their campaign money and where they go after leaving public office, so we don’t wind up with more like John Breaux.The Louisiana Democrat served 33 years in the House and Senate, where he helped write the Medicare drug program that produced billions for the pharmaceutical companies, before taking a lucrative lobbying job representing that industry. He has been quoted telling a reporter, “My vote can’t be bought but it can be rented.”A little-noticed side effect of term limits is the loss of experienced staff, whose expertise is valuable to the oversight of the executive.We already have term limits. It’s called elections. Vote the bums out.