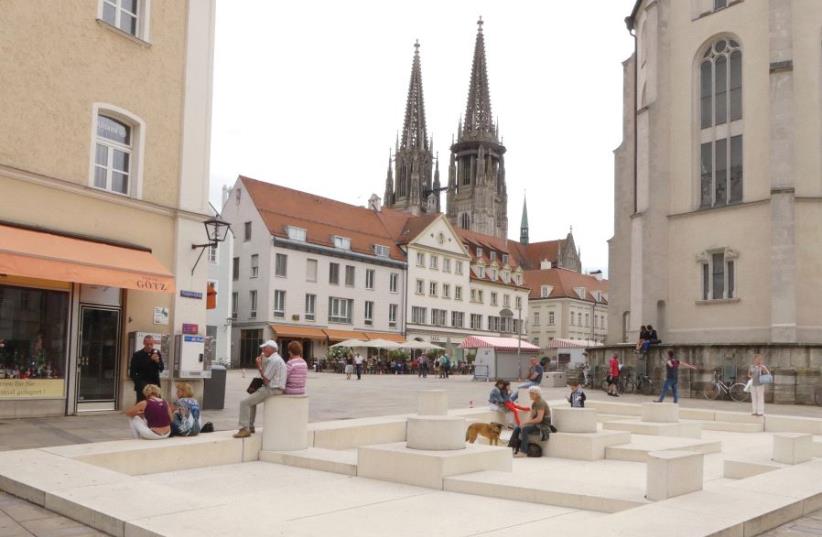 The modern memorial built over the remains of the 1519 destroyed synagogue in Regensburg’s Neupfarrplatz. The spires of the cathedral are seen in the background
(photo credit: IRVING SPITZ)
Advertisement
It’s no secret that Europe has a dark history of antisemitism, but from our travels throughout Europe, albeit limited, we’ve seen in many countries how most Europeans today would strongly condemn antisemitism and the horrors of the Holocaust.Europeans, especially in countries that were occupied by Nazi Germany, are happy to visit Holocaust memorials, to light memorial candles and remember and condemn the atrocities which occurred in retrospect, but what about before the war? Until very late into World War II, many Germans didn’t know the extent to which the Nazi regime was seeking to annihilate the Jewish people. It is reasonable to assume that your average Nazi party member on the street would not necessarily have known at first, or even believed, that the Jewish people was being murdered en masse.For many Germans, especially at the beginning of WWII, the Nazi party represented the rebuilding of Germany after WWI and the achievement of economic and military unity. Yes, there was antisemitism – no one really liked Jews.They had to wear yellow stars, they were boycotted and eventually banned from owning businesses, and it was taught by the Nazi regime that Jews were “impure” and one of the reasons Germany was in the situation it was left following WWI.But would the whole of Germany have endorsed mass murder? According to many testimonies, no.What sets this “well-intentioned” antisemitism apart from European antisemitism today? And why are the standards different when it comes to Israel, the only Jewish state that, had it existed then, might have prevented the Holocaust? European antisemitism has existed for millennia before the Holocaust and still exists today. Look no further than the hotel in Switzerland which recently made headlines for its “Jews must shower before entering swimming pools” signs.When the hotel owner was contacted about her antisemitic signs, she stated nothing explicitly antisemitic and seemed to have no problem with Jews, but said she just wanted her “Jewish guests” to shower before using the pool. Just as before WWII, the problem with European antisemitism isn’t even the bigotry itself, it’s that they don’t believe it’s antisemitism.Nowhere is that more apparent than when it comes to hypocritically condemning the Jewish state. Europeans roundly condemn antisemitism in public and leaders throughout Europe have made efforts to protect their Jewish communities, but when Israel suffers car rammings and stabbing attacks from the West Bank, and barrages of rockets from Islamist terrorist organizations in Gaza, far too many Europeans can’t comprehend the connection that this is an assault on Israel because of Israel’s Jewishness.It isn’t about the well-being of the state of “Palestine” or the State of Israel or any other political issue. This is a conflict rooted in the Muslim denial of the right of the Jewish people to live in its historic homeland since long before the Islamic invasions of the Middle East and Africa in 750 CE.As long as Europeans continue to turn a blind eye to the egregious antisemitism that saturates Palestinian society – such as the Palestinian Authority’s payment of stipends to terrorists who murder civilians and their families – its explicitly antisemitic teachings proliferate.These include gems such as that Jews are descendants of “apes and pigs” that is ingrained in young Palestinian children from birth, the public embrace and praise of terrorists, the purposeful misinformation campaigns aimed at inciting violence against Jews, (note, not Israelis, but “Yahood”). As long as this continues and Europe ignores it, what evidence do we have that they’ve learned anything at all from the Holocaust? Many Germans, at least initially, wanted to see their country rise again after the disaster of WWI, possibly motivated not as much by racism as by the well-being of their country. They felt they had been given unfair treatment following the Treaty of Versailles and were taught the Jews were to blame. How is this different from what Palestinians teach their children? European governments continue to fund the PA, which utilizes many of the same dehumanizing tactics that the Nazis used.It is these same tactics which made it far too easy for an entire country to ignore the murder of an ethnic group of six million people.Why then should a Palestinian terrorist, who was raised to hate the same dehumanized group, have any hesitation about murdering them? Why shouldn’t he or she, when taught from birth that the Jews are to blame for all the terrible problems in Palestine? In German eyes, the country was unfairly treated following WWI and merely wanted to restore the “greatness” of Germany. How is that different from the mantra of “From the river to the sea, Palestine will be free?” Why on Earth should Palestinians make peace with Israel when this is what they’re taught? The hypocrisy when it comes to condemning the only Jewish state is no different from the well-intentioned antisemitism that led to the Holocaust. Europeans ought to be the first to condemn Palestinian antisemitism and the last to provide international and political support as it follows the path of repeating the sins of Europe’s past.Hen Mazzig is a public speaker, writer and strategic communications consultant.Emily Schrader is a freelance writer, marketing consultant, and digital director at StandWithUs.