What about Iran’s human rights record?

“Giving Iran some space” is surely the wrong approach. 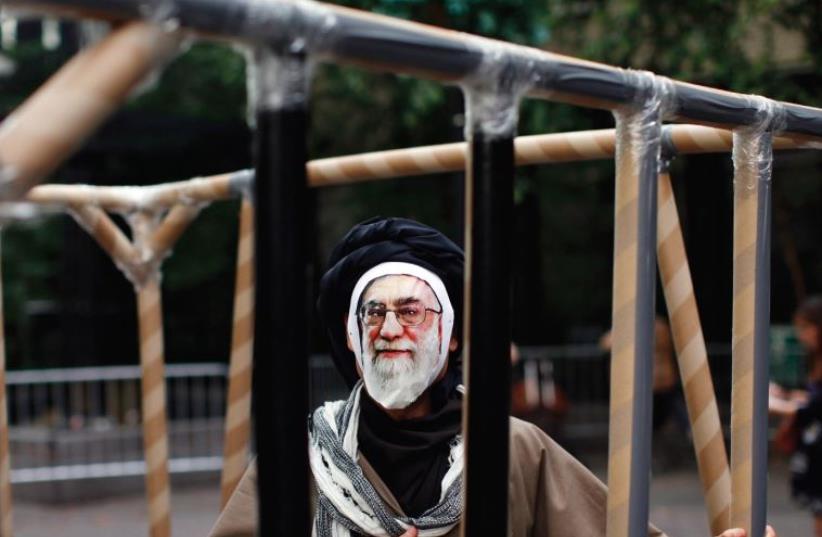 A PROTESTER wearing a mask depicting Iran’s Supreme Leader Ayatollah Ali Khamenei stands in a fake jail during protests outside the UN headquarters in New York in 2011. Iran’s human rights abuses seem to be off the agenda this year.
(photo credit: REUTERS)
Advertisement
Seemingly lost in the debate over the Iran nuclear deal is any focus at all on that country’s horrendous human rights record. In choosing to negotiate only on the nuclear program, the P5+1 (the United States plus China, France, Russia, the United Kingdom and Germany) lost an opportunity to exert leverage on Tehran’s serial human rights abuses, as well as its support for terrorist organizations like Hezbollah.It was only in 2011 that the UN Human Rights Council approved the appointment of a special rapporteur on Iran, Ahmed Shaheed, a respected diplomat from the Maldives. From the Iranian regime’s takeover in 1979, it has been a serial abuser of human rights: of political opponents, women, the LGBT community, journalists, adherents of the Baha’i religion and others. It has done so with impunity, unmoved by international exposure of its brazen abridgment of basic freedoms.This month in Geneva, the Human Rights Council will open one of its thrice-yearly six-week sessions. With the signing of the nuclear deal and the UN Security Council’s endorsement of the agreement, the rehabilitation of Iran in international forums has begun. A number of European states have already embarked on a headlong rush to do business there. Notwithstanding remaining sanctions (for five years) on the acquisition of advanced conventional weapons, it is believed Tehran already is anticipating an armaments buying spree. And Iran will surely bolster its backing (and direction) of Hezbollah and other terrorist proxies.The forthcoming session at the Human Rights Council should give us a good indication of whether or not Iran will get a pass on its human rights record. Already, some diplomats are reported to have urged “giving Iran some space” on the issue, now that it has agreed to the nuclear deal. That would be bad news for Shaheed, whose 2014 report on human rights in Iran runs 81 pages.His report, which includes a detailed annex of individual cases, makes for a powerful charge sheet. He notes that there were 753 individuals executed in Iran in 2014, the highest number in 12 years. They included 25 women, and there were 53 public executions. This, while the Tehran regime was negotiating the nuclear deal with the P5+1 powers.Absurdity is the rule: Shaheed cites the case of a death sentence pronounced on Mohamed Ali Yehari, an expert in alternative medical theories, for “corruption on earth.”He was originally sentenced to five years for “committing blasphemy.”Under the category “reprisals against individuals for contact with human rights organizations and U.N.human rights mechanisms,” 15 persons were prosecuted or “faced intimidation.”The report covers countless examples of arbitrary detention of journalists, lawyers and student activists. Four leaders of the failed 2009 Green Revolution remain under house arrest. Shaheed cites the cases of 30 journalists who were detained on charges of “national security crimes” and “propaganda against the system” and “spreading falsehoods.” Five privately-owned religious TV stations were closed down for “working illegally for satellite TV stations in the United States and Great Britain.”Last November, 24 Kurdish prisoners went on hunger strikes to protest inadequate medical treatment; they had been arrested on “national security” charges for commemorating International Mother Tongue Language Day. From the outset, followers of the Baha’i faith have been a special focus of social stigmatization. The report notes that 135 Baha’i remain jailed for their religious beliefs. Last year, a Baha’i cemetery was desecrated; to date, no perpetrators have been apprehended. Burials of Baha’is have been delayed or proscribed.Christians have often been a target in Iran. On Christmas Day last year, nine persons were arrested for celebrating the holiday in the town of Rudehen.In response to complaints of discrimination against the gay community, the Shaheed report notes that “the government responded by stating its total rejection of homosexual behaviors.”Violence against women and juvenile offenders is a staple of the human rights abuse catalog: Shaheed cites nearly hundreds of acid attacks on women, many of them for wearing “improper clothing.” No arrests in these cases were reported.Even with this shameless and pervasive record of rights abuse, one would have thought that Tehran would have released the four Americans it is holding (Washington Post reporter Jason Rezaian; Saeed Abedini, a Christian pastor from Idaho; Amir Hekmati, a dual citizen and Marine Corps veteran; and Robert Levinson, a US government contractor). The temerity of the Iranian rulers seemingly knows no bounds. Not to have made their release a condition for agreeing to the nuclear deal is one of the major criticisms of its opponents.Addressing Iranian human rights abuses must be made a visible priority by the P5+1 and others in the community of democracies. Placing Ahmed Shaheed’s reports in the circular file and not acting more forcefully to isolate Iran on these issues will only embolden a regime already brimming with hubris over the nuclear deal.“Giving Iran some space” is surely the wrong approach.

The author is the executive vice president of B’nai B’rith International. As the organization’s top executive officer, Mariaschin directs and supervises B’nai B’rith programs, activities and staff around the world.
Advertisement
Subscribe for our daily newsletter