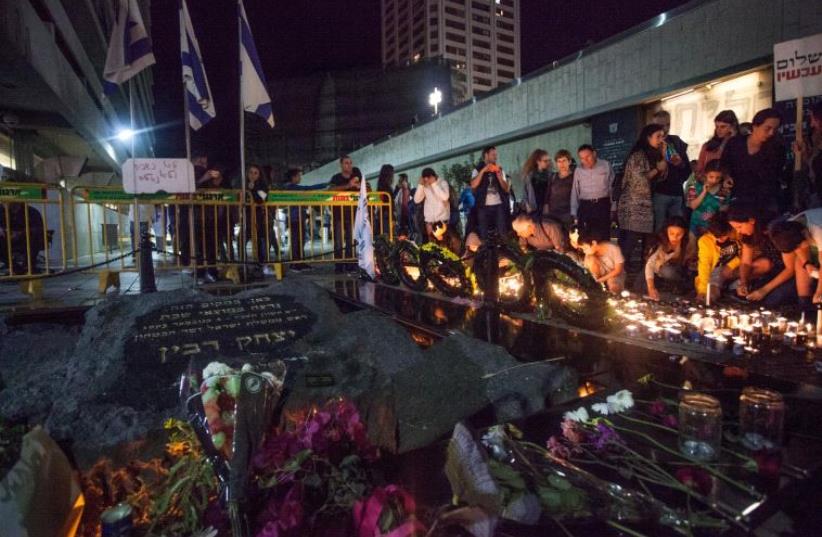 Scenes from Yitzhak Rabin memorial - November 4, 2016
(photo credit: MEREDITH HOLBROOK)
Advertisement
The assassination of Yitzhak Rabin left Israeli society at a crossroads, deliberating an existential-social question: might the rabbis of that time and their interpretation of Halacha, Jewish law, have provided the assassin with the foundations and religious legitimacy for his political ideology? The murder disrupted the delicate balance between the religious/ultra-Orthodox sectors and the secular public. Today, 22 years later, religious radicalization has deepened and widened the ever growing social rifts.Over the past 22 years, a new generation has grown up in Israel, largely unaware of the heritage of Rabin and the turning point that his assassination represents. The public awareness and memory of the murder have eroded considerably and so have the historical and social foundations from which Rabin arose. The glorious legacy that seemed to be rock-solid in the years following the assassination has faded into empty symbols. Those who seek to persist in Rabin’s path are now asking where to find that path today. Time and again, the leftist-social “GPS” errs and tries to recalculate its route, all the while relying on vague messages of tolerance and memory.Yet the most troubling development around this theme is the parallel reality that has thrived under our very eyes in the past years. Over the past week, I have been bombarded with newspaper inserts and ads titled “MOTHER," inviting readers to buy “the mezuza of our Mother Rachel,” attend events to commemorate her demise or join celebrations of “the MOTHER of Us All,” which take place one day before the anniversary of Rabin’s assassination. Some people say this hilula (a celebration held in memory of a saint) is so popular it even threatens the status of the annual hilula held on Lag Ba’omer to mark the death of Rabbi Shimon Bar Yochai.What exactly is going on here? The biblical matriarch Rachel is believed to have died on the 11th of Cheshvan; the national memorial day for Rabin falls on the 12th. Years ago, before Rabin was assassinated, the anniversary of Rachel’s death was never considered a central event in the national-religious school system. Yet over the years, the day has become increasingly prominent in school curriculums and the public discourse.Coincidence? Perhaps. But it does seem convenient – Rabin’s assassination brought to the surface questions about Judaism, Jewish identity, faith and incitement. These questions may be even more profound in the religious sector, which, on the anniversary of Rabin’s murder, is expected to ask itself honestly: “Did we give rise to “wild weeds” (a metaphor used at the time of the murder to reference the assassin Yigal Amir)? Are we perhaps secretly glad that we did?”
Commemorating Rachel’s memorial day is the perfect alternative enabling national-religious schools to dissociate from the memory of the murder and perhaps even avoid some of the moral and social questions which emerge from learning about and discussing the assassination.One may assume the day was given a boost of attention to fill an uneasy void in the national-religious educational system, allowing schools, even subconsciously, to blur and erase Rabin’s memorial day with a “holier” and much simpler day of remembrance.The biblical figure of Rachel is just as mythical and furthermore, the story of her life and death also serves the narrative of the settler movement: “your children shall return to their borders” (Jeremiah 31), offering an opportunity to study and discuss our biblical right to this land. Hence, it is the perfect response, with the perfect timing, to the peace-concession conflict which Rabin’s memorial day brings to light.It is not a question of which memorial day is more important. The issue is the impact that these days have on the reality that is emerging before our eyes, or to be more precise the two alternative realities that are emerging here.The educational system and the IDF are the most important tools for shaping the social-cultural-Jewish identity of the nation. They are meant to “produce” proud citizens who serve their country together, and to develop the national consciousness of future generations. Yet how can we expect to form a society with a unified and shared national identity when two alternative realities and two agendas are upheld? As long as two sectors create and maintain opposing and clashing national narratives, we will be destined to lead separate lives with no common ground for discourse or mutual understanding. With no collective narrative, we are increasingly detached from “Rabin’s way,” but even more sadly, increasingly deprived of a shared way.The author is the Vice-President of Marketing in BINA, The Jewish Movement for Social Change.
Advertisement
Subscribe for our daily newsletter