With Bosnia-Herzegovina beating Andorra late Sunday night, Israel needs four more points from its final two qualifiers to finish ahead of its main rival for third place and progress to the playoffs. 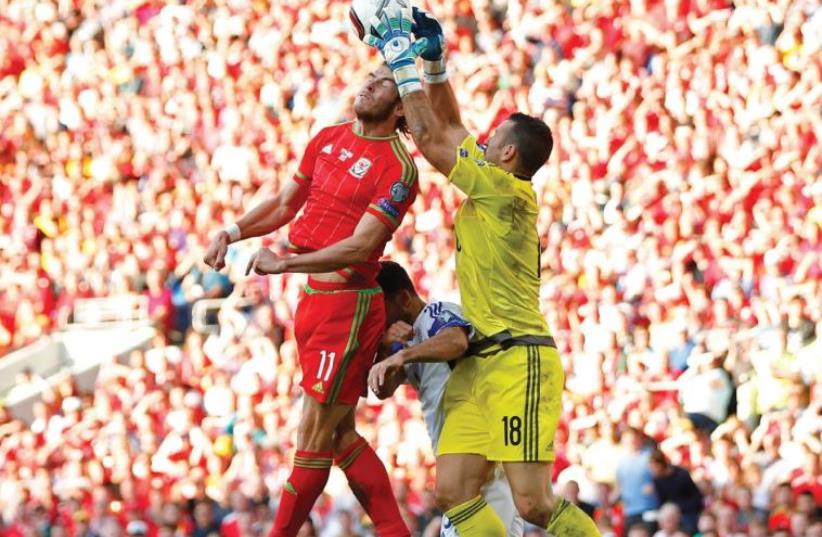 Israel goalkeeper Ofir Martziano (right) denied Wales superstar Gareth Bale (left) time and again during yesterday’s 0-0 draw in Cardiff
(photo credit: REUTERS)
Israel picked up a precious point to boost its Euro 2016 qualification hopes on Sunday, drawing 0-0 with Wales in Cardiff.The blue-and-white registered just one attempt at goal on Sunday, but was more than content with thwarting the hosts and superstar Gareth Bale to collect a point which improves its chances of ending Group B in third place.With Bosnia-Herzegovina beating Andorra late Sunday night, Israel needs four more points from its final two qualifiers to finish ahead of its main rival for third place and progress to the playoffs.The top two advance automatically to the championships in France.Israel will be confident of overcoming Cyprus at Teddy Stadium in Jerusalem in its next qualifier on October 10, but faces the toughest match of the entire campaign three days later when it visits Belgium in Brussels.However, following Sunday’s draw in Cardiff, the blue-and-white knows that a single point in Brussels should be good enough to finish in third, even should Bosnia win its final two matches.Bosnia hosts Wales on October 10 before visiting Cyprus in its final qualifier three days later.“This was a really tough road game but we got a result,” said coach Eli Gutman.“We knew that if they beat us they will be relaxed in the match in Bosnia, but now they will need to go there and get a point.”Wales had a handful of chances to clinch victory with Aaron Ramsey spurning its best opportunity when he headed over in the first half.Simon Church thought he had won it in the final minute of stoppage time but was ruled offside when he headed the ball into the net.“They made it difficult for us, we wanted a win but it is another point and another clean sheet,” Wales captain Ashley Williams told Sky Sports.“We wanted to get it done and dusted today but it has been a positive week with four points.”Backed by a raucous home crowd at the Cardiff City Stadium, Wales made a fast start and dominated the early possession but struggled to find a breakthrough against Israel’s deep-lying defense.Chances were limited in the first half although Arsenal midfielder Ramsey wasted a superb opportunity on 10 minutes when he headed over a gaping net from close range after Andy King’s shot had been blocked by keeper Ofir Martziano.Israel came out of its shell after the break, pushing further up the pitch, but that merely encouraged Wales’s efforts to find a winner.Talisman Gareth Bale lifted a free kick over the bar from the edge of the area two minutes after the break, but was not at his match-winning best as the hosts continued to pile forward.A corner by Ramsey found King but his powerful header was saved by Martziano and Hal Robson-Kanu had loud appeals for a penalty waved away when the ball hit Eitan Tibi on the arm as the Wales forward was poised to volley.The noise levels increased as Wales pressed in the final stages and the stadium erupted when Church headed the ball past Martziano only for the celebrations to be curtailed by the linesman’s flag.“It was important that we didn’t lose this match,” said Israel midfielder Eran Zahavi. “I think we could have snatched a win at the end, but we got the point we wanted and we are looking ahead to the matches against Cyprus and Belgium.Everyone thought that Wales would celebrate at our expense but they will have to celebrate elsewhere.”Reuters contributed to this report.