By AARON REICH
An asteroid is seen passing by the Earth in a flyby (Illustrative).
(photo credit: PIXABAY)
Advertisement

Three asteroids are headed for Earth on Monday, the first day of Rosh Hashanah, in what will be the first asteroid flybys of the Jewish New Year, according to NASA's asteroid tracker.

The three asteroids that are set to pass the Earth on the first day of Rosh Hashanah have been designated 2022 SE6, 2022 SR4 and 2022 SY4, according to the Center for Near-Earth Object Studies (CNEOS) at NASA's Jet Propulsion Laboratory (JPL).

Each of the four Jewish New Year asteroids are on the smaller side, according to NASA.

The first two asteroids, asteroid 2022 SE6 and asteroid 2022 SR4, both have around the same estimated diameter: Between 18 meters and 41 meters wide.

To put this size into perspective, at 41 meters, both asteroids would be just slightly smaller than The Arc de Triomphe in Paris, France. 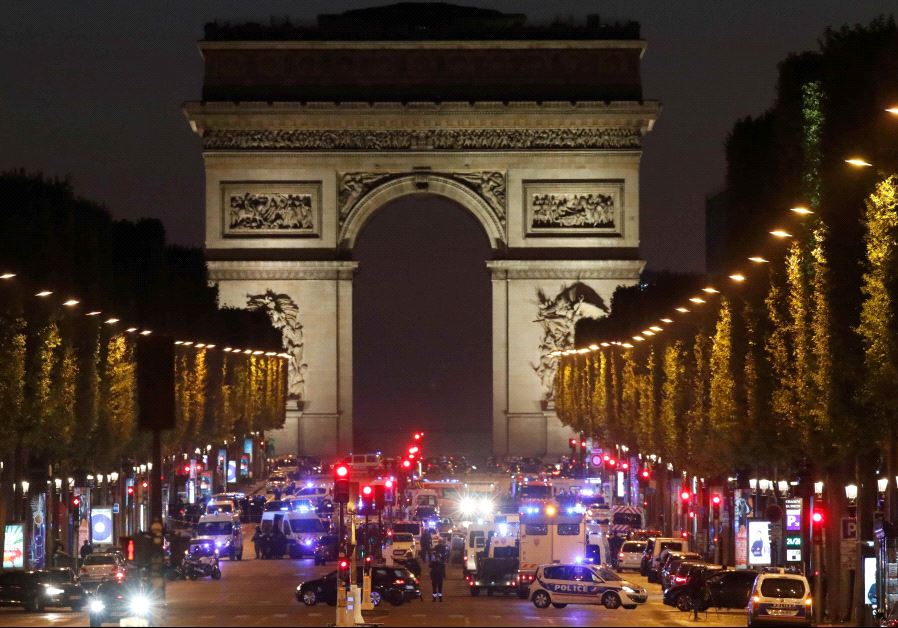 But while these two asteroids are around the same in size, they differ in terms of speed.

According to NASA, asteroid 2022 SE6 is flying at a speed of approximately 4.17 kilometers per second, or 15,012 kilometers per hour - which is 12 times the speed of sound. This velocity is nothing to scoff at - it's 40 times faster than a peregrine falcon, the fastest animal on Earth.

But in this regard, both asteroids are outclassed in terms of speed by the last asteroid, 2022 SY4, which clocks in at approximately 11.77 kilometers per second. This is around 42,372 kilometers per hour, or 34.3 times the speed of sound.

However, 2022 SY4 is also much smaller, with NASA giving it an estimated diameter ranging between 7.8 meters and 18 meters. That means that, at most, asteroid 2022 SY4 is just around the size of a bowling lane.

Don't get too scared that this Jewish New Year will end right away via asteroid impact. According to NASA, we have nothing to worry about regarding these asteroids.

To put this in perspective, consider Earth's Moon. On average, it orbits the planet at a distance of 384,000 kilometers - and this is despite the fact that, as this is the first day of the Hebrew month, which is a lunar calendar, the Moon will not really be visible in the sky.

Most asteroids that do pass Earth tend to still be much farther than this distance usually over a million kilometers at minimum. This is still close on a cosmic scale, but still far enough that we don't need to worry.

Out of these three asteroids, it's asteroid 2022 SY4 that is set to have the closest flyby, but still at a distance of just a little over 900,000 kilometers away from the Earth.

And even if the asteroid hypothetically did impact the Earth, it still wouldn't be too much of a concern.

An even larger asteroid that's over 300 meters wide – like the Apophis asteroid – could destroy an entire continent. An asteroid over a kilometer in width – like asteroid 138971 (2001 CB21), which passed the Earth in early March 2022 – could trigger a worldwide cataclysm.

At its size, asteroid 2022 SR2 would, at best, cause a loud explosion upon atmospheric entry. As for any actual damage, it would be minimal or completely nonexistent.

But as for the question of whether an asteroid will ever hit the Earth in 2022, or rather in the past Jewish year of 5782, the answer is yes. Or rather, it already happened.

Back in March 2022,a small asteroid around half the size of a giraffe known as 2022 EB5 hit the Earth just hours after its discovery, resulting in no damage.

Thankfully, not for a long time, at the very least. According to NASA, the Earth is free of risk of any catastrophic asteroid impacts for the next century.

This mosaic of the asteroid Bennu was created using observations made by NASA’s OSIRIS-REx spacecraft that was in close proximity to the asteroid for over two years. (credit: NASA/Goddard/University of Arizona)
What is the next asteroid to hit Earth?

Scientists don't know for sure, but there are a few candidates.

One of the most dangerous asteroids for Earth at the time of writing is the gigantic 500-meter-wide asteroid Bennu. If this asteroid impacted the Earth, the result would be catastrophic - but as far as NASA is aware, this won't be for a long time, if ever.

Not yet, but scientists working on it.

It's a strong possibility, particularly with the field of asteroid deflecting.

The field of planetary defense is specifically organized to find ways of keeping the Earth safe from asteroids and scientists at NASA and across the world are hard at work trying to do just that.

Currently, the most promising of these efforts is NASA's Double Asteroid Redirection Test (DART) mission, which will see a small specially-designed spacecraft slam into an asteroid to see if it can possibly alter its orbit ever so slightly, which is what asteroid deflection is. But time will tell if this will prove effective.

The DART Mission is set to reach its target, the asteroid Dimorphous in the Didymous system, on September 26, the same day as these flybys.

Lets hope God inscribes our name in the Book of Life, so this Rosh Hashanah, this Judgement Day, doesn't end up being our last.