Organizers pledge to steam on for Gaza.

By JPOST.COM STAFF, ASSOCIATED PRESS
JULY 13, 2010 16:00
Libya ship rally 311 AP
(photo credit: Associated Press)
Advertisement
The IDF on Tuesday afternoon confirmed that it had made radio contact with a Libyan aid ship trying to breach Israel's blockade of the Gaza Strip. The confirmation came after the ship's organizers said that an Israeli military vessel had confronted the ship and ordered it to change course for the Egyptian port of el-Arish.RELATED:
Libyan shipowner invites IDF to board
IDF probe: Army didn't have a 'Plan B' for flotilla op
Analysis: Blockade-busting backfires

The Gadhafi International Charity and Development Foundation said its boat refused to alter its destination and will steam on for Gaza.The foundation said in a statement posted on its website Tuesday that the Israeli vessel was continuing to shadow the aid ship. 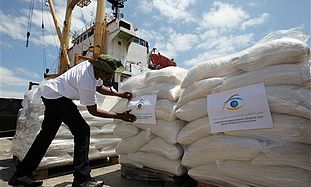 Loading Libyan aid ship.There was no immediate comment from the IDF.The ship's intentions appeared conflicted.  Earlier Tuesday, one of the owners of the Amalthea said that the crew would unload its humanitarian goods in the Egyptian port of el-Arish if refused permission to reach Gaza. "If this is the only option put forward by the Israeli authorities, we will choose to sail to the port of el-Arish and transfer the assistance by ground to Gaza," Greek businessman Aleksei Angeolopoulos said in an interview with the Arabic newspaper Ashraq al-Awsat.

However, it appeared the ship was now resolutely sailing toward Gaza, rather than agreeing to dock in a neighboring port. Angeolopoulos told Israeli authorities that, "the ship is carrying humanitarian aid and food and there are no weapons or prohibited materials, as claimed by Israel.""If Israel wants, the Israeli navy is invited to board the ship and to search it so that they can see with their own eyes that it is only carrying food and allow it to continue to the port of Gaza."Activists aboard the Libyan aid ship headed for Gaza plan to arrive at their destination Wednesday, AFP news agency reported Monday.
Advertisement
Subscribe for our daily newsletter