By NIV ELIS
USelections2012
(photo credit: Supplied)
Advertisement
Even after losing last week’s primaries in Mississippi and Alabama, conservative states he needed to revive any shot at the winning the Republican nomination, Newt Gingrich is defying calls from opponents to drop out of the race. He seems unphased by - even proud of, as Jon Stewart points out - the fact that he has only won two states in the nomination process thus far, one of them being his home state of Georgia. Instead of getting defensive, he remains steadily in attack mode.This week, Gingrich repeatedly hammered on the one issue that seems to be slowing US President Barack Obama’s resurgent poll numbers - high gas prices - by asking his 1.44 million Twitter followers to retweet messages with the hashtag marker #250gas:
Tweet of the week:

Given his impressive following on the micro-blogging site, one might think Gingrich could effectively use it to guide the political conversation. He’s got 3.8 times as many followers as Mitt Romney, and over eight times as many as Rick Santorum, despite lagging behind his competitors on just about every other measure of campaign success, from Facebook likes to primary delegates won. So why aren’t all those Twitter followers better-serving the former speaker of the House?Because they’re not real.As it turns out, over 90% of Gingrich’s Twitter followers are fake, representing either spambots or anonymous users with no other web presence whatsoever (most politicians have about 3-4 times Newt's proportion of real users). Some have even accused the former speaker of the House of buying his followers.But perhaps none of that matters at this point in the primary contest. Like Ron Paul, who has not yet scored any primary wins, Gingrich is likely staying in the race so that he can wield some influence at the Republican convention this summer, perhaps in hopes of becoming running-mate to the eventual candidate.The two men most likely to earn that distinction, Romney and Santorum, made their own social media splashes this week. A shirtless photo of Santorum, snapped on a campaign break in Puerto Rico, made its way around the Web with much mockery for the Pennsylvanian’s paunch (though it was probably his retort that the island could become a state if only it learned English that handed rival Romney a sizeable win there).

Click here for special JPost coverageFor his part, Romney attempted to enhance his Web presence by launching a blog through his personal aid, Garrett Jackson. Jackson started tweeting and posting video clips of Mitt on the campaign trail, but most of the videos have failed to make a big impression thus far. The most-viewed (Mitt eating pancakes) has garnered some of its 8,500 clicks from critics deriding Romeny’s humorless demeanor, building on the narrative that he has trouble connecting with ordinary voters. One new Tumblr blog devoted itself to pairing Romney quotes with photos of fictional, out-of-touch socialite Lucille Bluth from the television series Arrested Development.Indeed, when it comes to YouTube prowess, the Democratic incumbent remains light years ahead of his Republican competition this week. Mimicking his 2008 campaign, in which he purchased a half-hour of prime time television to run a slick campaign film, Obama released a Hollywood-style 17-minute video in hopes of highlighting his accomplishments since his inauguration and framing his failures in terms of the enormity of the challenges he faced when first elected. Obama tapped Tom Hanks to narrate and Oscar-winning director Davis Guggenheim, best known for the Al Gore documentary An Inconvenient Truth, to direct the short film, entitled The Road We’ve Traveled. In less than five days, 1.5 million people viewed the clip, and even its 2-minute trailer garnered a half-million clicks.
Viral Video of the Week:
When it comes to YouTube, the sitting president’s advantage over the competition remains enormous. A handy political tracker on the video site shows the extent of attention devoted to each candidate’s videos. The closest rival - Ron Paul, with his hardcore fan base of "Revolutionaries" - commands only a fraction of Obama’s video views. 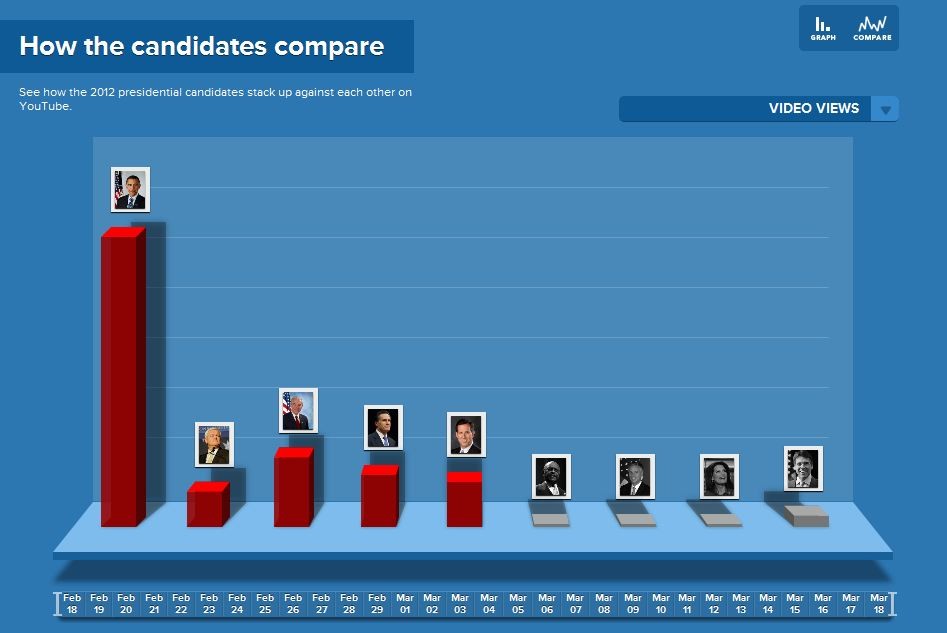 Obama leads on Youtube [Screen Shot]Perhaps that will change when the Republicans finally settle on a candidate. But as they head into Illinois on Tuesday and Louisiana Saturday, the prospect of ending the infighting and focusing on the general election remains distant.#USelections2012 offers weekly insight into the US Presidential election through a social media lens, tracking candidates as they try to reach 270 electoral votes in 140 characters or less.The writer is a Breaking News editor and blogger at The Jerusalem Post. Read his blog ‘The Bottom Line’ here.
Advertisement
Subscribe for our daily newsletter