This Week: In the wake of the VP debate, Obama and Romney face off for the make-or-break second debate.

By NIV ELIS
Obama and Romney US presidential debate 370
(photo credit: REUTERS)
Advertisement
Big Bird. Biceps. Smirking. Pizza Hut. The litany of bizarre issues US President Barack Obama and his Republican challenger Mitt Romney will face when they meet for their second of three debates Tuesday evening has grown alongside the stakes this past week, as the vice presidential debate thrust new conversation pieces into the national chatter.Even as the news focus shifted, fallout and reaction to the first debate continued to set the stage, as videos and parodies kept popping up across the web.One amusing video reimagined Jim Lehrer’s subdued performance as the debate moderator as overly aggressive:A rejoinder to Obama's weak showing by the liberal Daily Kos proved a double-edged sword. Pitting Romney against his own contradictory stances exposed the candidate’s inconsistency, but implicitly accepted that taking Obama’s lackluster performance out of the equation was the only way to rescue the debate. Over two million people watched the clip.Viral Video of the Week:
US Vice President Joe Biden, who had the express mission of stopping the freefall in the polls Obama faced since his dismal performance, may have overcompensated in the debate with Paul Ryan. By laughing, gesticulating and rolling his eyes dismissively at Ryan during the rather substantive debate, Biden energized the Democratic base, but earned the ire of Republicans who said he was clownish, over the top and condescending. (By strange coincidence, hours prior to the debate the tag #iDoThatMittRomneySmirkWhen trended to the top of Twitter, mocking Romney’s grin.) “Laughing” was among the top terms associated with “Joe Biden” searches on Google.For Ryan, however, the term “shirtless” was among the top associated search terms. The young, buff congressman may have brought that fate upon himself; he had previously posed for a series of pictures showing off his biceps at the gym, which TIME Magazine conveniently published as he was “getting pumped” for the debate.During the debate, Biden attacked Romney for his infamous “47% comment.” Romney has found it difficult to shake the impression that he dismissed nearly half the electorate as moochers, and found an unexpected digital backlash to his recent apology. "I said something that's just completely wrong," he told Fox News. "I care about 100 percent." But unfortunately for Romney, the phrase “completely wrong” became associated with his visage on Google’s image search. (In a development that could only be described as “meta,” once the linkage was discovered, screenshots of the Google Images search began populated the remaining image results). 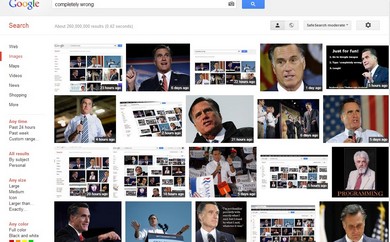 Twitter, of course, tracked people’s reactions to the substance of the VP face-off. 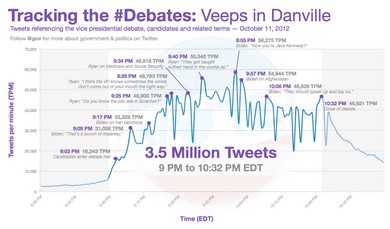 If there was one things that most of the four million Tweeters who watched the debate agreed upon, it was that moderator Martha Raddatz was forceful, asking tough questions, pressing candidates for specifics, and keeping the conversation on track, a sharp contrast from Lehrer’s approach.

A word about Raddatz: she is making the case for Jim Lehrer's retirement. thebea.st/VWXJFt
&mdash; Andrew Sullivan (@sullydish) October 12, 2012

But even evaluations of Raddatz’s performance, like so many critiques of the debates, seemed to be colored by political leanings. Those supporting Biden, who was seen as having won the debate by a small margin, praised her. Those supporting Ryan accused her of bias. One Tweet just about sums it up.Tweet of the Week:

With his substantial lead virtually eliminated since the first debate, the pressure is on Obama to win over that CNN audience, in particular, during the next two rounds.#USelections2012 offers weekly insight into the US presidential election through a social media lens, tracking candidates as they try to reach 270 electoral votes in 140 characters or less.

The writer is a Breaking News editor and blogger at The Jerusalem Post. Read his blog ‘The Bottom Line’ here.