Diamonds in the rough

By YONI COHEN
Turkish Bazaar, Acre 370
(photo credit: Arik Salin)
Advertisement
Tucked away in Acre's Old City lies a hidden gem. One that is just waiting to be discovered. On first inspection, the recently developed Turkish Bazaar may look like any other market alley filled with shops and food stalls but a closer inspection reveals a special project that is attempting to put Acre on the map once again.A recent visit to the bazaar, which was originally established in the Ottoman period in the 18th century, revealed a bustling center of a few intimate stalls, all operated by passionate people with fascinating individual stories of their own.The 100-meter long row of shops and stalls has recently undergone an extensive restoration and renovation process, making sure to preserve the unique features of the historical site.Jewelry design, a premium snack bar, luxury cheeses, a coffee shop, an art shop and an ice cream parlor are just some of the attractions on offer.Shai Cohen, manager of the bazaar, explains that this particular section of the market had been closed for a number of years and about eight months ago works were completed to restore it to its former glory."Everything was painstakingly renovated and restored," he explains. "We wanted to try to maintain the original features, while bringing the bazaar into the 21st century."While the bazaar is located in the heart of the Old City's market, Cohen insists that it is worlds apart from the Acre that people are familiar with. "The bazaar has a more boutique feel to it. We are appealing to a different market."One of the most popular outlets at the bazaar is the authentic Turkish-style coffee shop Badar Han, which imports top quality coffee from some of the best coffee-growing countries in the world. Guests sit on low chairs in a small corner of the bazaar and are served their drinks in traditional glasses from authentic silver trays.Badar Han is not just about the coffee; there is also a selection of baklava and other pastries on offer, as well as fresh herbs and spices.Perhaps one of the most stand-out stalls in the bazaar is Kukushka premium snack bar by Gil Roditi, where he serves handmade sausages, calamari and shrimps, chips, as well as locally-brewed beer.Roditi explains that he is offering a new concept that hasn't been seen yet in Israel, and certainly not in the North. "We provide European street food with touches of Tel Aviv and the wider Middle East," he says.Roditi explains that he has worked in some of the best restaurants in Tel Aviv, but is happy with the more relaxed paced in Acre. "I've received a lot of positive feedback and so far I am very happy to be a part of this special project," he says.Staying on the food theme, cheese maker Sarit Regev provides her own unique brand of French-inspired local cheeses from Avirim Forest. Regev, who studied in France and Italy but is now based in based in the Gallil, creates homemade cheeses that are suited to the Israeli market. 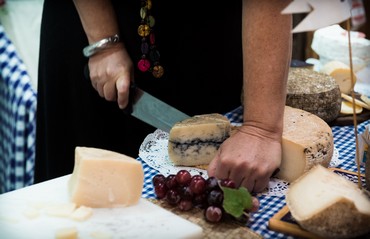 There is a lot more to her intimate stand at the bazaar than just cheese. Regev is a keen social activist and makes sure to include children from the local community in her projects. Six months ago she set up a project whereby children with special needs helped with the cheese-making process. "It's important to give everyone a fair chance. We do much more than just make cheese, we help the community as much as possible," she explains.For something a little sweeter, boutique ice cream parlor Bouza offers quality homemade ice cream. Adam Ziv, the man behind the ice cream, has always been a fan of the frozen good stuff and even went to Europe in order to lean how to make it from the professionals.Ziv explains that he only uses ingredients from the local area and that freshness is a must. "I've wanted to make ice cream for a while and I think that Acre is a perfect place to do it," he says. "I am very optimistic about the Bazaar and I really like the atmosphere here."As well as food, the bazaar also boasts exclusive art and jewelry shops including one run by jewelry designer Atara Katzir, who is a graduate of Wizo Art School. She is very proud to show off all of her handmade creations, as well as describing what an honor an it is to be a part of such a special project.The Turkish Bazaar, 1 Weizman Street, Old City, AcreOpen everyday from 10 a.m. till 6 p.m.052-6578220Free admissionShopping and eating can be a tiring sport, so relaxation is a key ingredient to an all-round successful trip to Acre. That's where authentic Turkish bath Hamam Ghattas comes in.The man behind the project is Amil Ghattas, who was born and raised in Acre's Old City. A colorful and passionate character, Ghattas says that with the opening of the Turkish bath, his dream has come true.Ghattas, who invested nearly NIS 6 million in the project, says that he wants to offer a luxurious and classy experience in surroundings that are as authentic as possible. 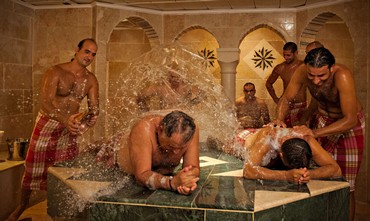 As well as wanting Hamam Ghattas to be successful, he says that the project is also intended to bring more tourists to Acre so they can discover the history and beauty of his hometown as well as learn about the rich cultural heritage. Ghattas feels it is important to give back to the city that has given him so much, and expresses this though various charity and community projects.The luxury Turkish bath, housed in an original Ottoman building, has been painstakingly renovated and restored to its original state. The authentic and original features alongside the most modern and luxurious equipment offer an all-round experience.The renovations began in 2009 and very close attention was paid to preserving many of the unique architectural features.In 2012 the renovation works were finally completed and the bath was opened to the public. It includes two floors of indulgence with the ground floor housing a large traditional seating area, steam room, massage table as well as separate changing areas, lockers, bathrooms and showers for men and women. The top floor includes a dry sauna, private massage room, warmed seating area, two massage beds and underfloor heating.The complex can be rented by groups or couples (NIS 250 per person), but reservations need to be made in advance. The full treatment lasts up to three hours and includes various massages, skin treatments as well as fruit and drink.Ghattas has a team of experienced male and female masseuses who give all the traditional treatments. They offer a very authentic experience, very similar to that found in traditional Turkish baths. The whole experience is extremely relaxing and leaves guests feeling invigorated and refreshed.Hamam GhattasOpen every day from 10:30 a.m. - 11:30 p.m.Phone: (04) 689-7462, 050-833-5210Email: [email protected]Website: http://www.GhattasBath.comThe writer was a guest of the attractionsFollow @JPost_Lifestyle