Off the Beaten Track: Battle for the Golan Heights

By JOE YUDIN
Golan Heights 311
(photo credit: Joe Yudin)
Advertisement
Joe Yudin owns Touring Israel, a company that specializes in “Lifestyle” tours of Israel.Between 1948 and 1967 the Syrian military sat atop the Golan Heights and on the shores of the Kinneret (Sea of Galilee), looking down at Israel in the valley below. In 1964, the Syrians began work on canals to divert the water sources of the north away from the Kinneret and by the end of May 1967, the Syrians had moved the bulk of their forces to the borders of Israel and their leaders were openly boasting of Israel’s eminent destruction in the press.In a bold move, the government and IDF decided to strike back, and in two days captured the Golan Heights. Some of the fiercest fighting of the Six Day War occurred on the Golan Heights. From Tiberias take Route 90 north, pass Rosh Pina and turn right at Mahanayim Junction onto Route 91. Once you pass Mishmar HaYarden you are over the 1949 cease-fire lines, that were in theory a demilitarized zone between Syria and Israel between 1949 and 1967. Continue down this road into the Jordan River Valley and check out the bunkers and pillboxes used to defend against Syrian attacks before 1967. Pass Kibbutz Gadot on your left. This community suffered thousands of bombs during the dark days between 1948 and 1967. Cross the Jordan River and check out the ruins of the crusader bridge, fortress and convent as you drive through the switchbacks.  Three kilometers to the east of the river, before Beit HaMeches Junction is a turn off to the left for Mitzpeh Gadot (Gadot Overlook) where you should park. 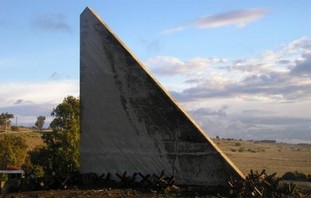 As you walk up to the triangular memorial on the paved path, notice the Syrian bunkers, trenches and fortifications as this was once a Syrian base on the front with Israel. Stay on the path as there are landmines in the area. The memorial is supposed to evoke images of an Israeli bomb shelter as the constant Syrian bombardment of Israeli civilians made them live in shelters for many years. It also reminds us of the climb that the soldiers of the 33rd Battalion had to make during the battle, through a minefield, in order to capture this position. Check out the names of the fallen engraved here and continue to the overlook of the Jordan Valley. Continue east on Route 91 to HaShiryon Junction and make a left on road 978. Continue to Gov Ga’ash Junction and turn right on road 9799. Take that to the end and make a left on Route 98 and a quick right on an unmarked road with a sign directing you to the memorial site of OZ 77 and the Valley of Tears. Pass some orchards and vineyards and continue to the site which overlooks Syria and the city of Kenetra. Park in the lot and walk out to the memorial.Notice the Russian mage T-65 Syrian tank with the hole in its turret. This tank had broke through the Israeli lines but was destroyed where it stands. Avigdor Kahalani, commander of the tank battalion nicknamed OZ 77 (the Brave 77) after this battle commanded 68 tanks before the battle here that began on Yom Kippur in 1973. He and his men fought some 600 Syrian tanks here for three days without food, water, sleep and in the end only a few shells of ammunition. 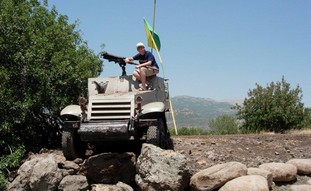 The Syrians had the latest Russian tanks with night vision, something the Israelis did not have. At the end of the battle Kahalani had six tanks left but led a charge down the hill to fight off the remaining Syrians knowing that the reserves had yet to come to the battle and if the Syrians broke through his position it was a quick dash into the Galilee. The Syrians, tired, hungry and rattled, retreated despite the overwhelming numbers. Check out some of the destroyed tanks from both sides scattered among the battlefield as well as the memorial to the soldiers who died here made up from pieces of the destroyed tanks. On your way out, visit the movie theater at Kibbutz El Rom and see the fantastic movie with real war footage and interviews with Kahalani and his men. Do not miss it.Go south on Route 98, right on road 959 and left at Bental Junction. Pass Kibbutz Merom Golan, or stop briefly for lunch at the Kosher Cowboy Ranch for a bite or a horseback riding excursion, and then make a left up the extinct volcano of Mt. Bental. This is a decommissioned IDF base. The views into Syria, Mount Hermon, the Jordan Valley, the UN peacekeeping base and the Syrian city of Kenetra are spectacular. Make sure to explore the bunkers and descend into the belly of the mountain which was where the IDF soldiers lived.Joe Yudin became a licensed tour guide in 1999. He completed his Master’s degree at the University of Haifa in the Land of Israel Studies and is currently studying toward a PhD