Off the Beaten Track: Castle above the sea

By JOE YUDIN
Apollonia 311
(photo credit: Joe Yudin)
Advertisement
Joe Yudin owns Touring Israel, a company that specializes in “Lifestyle” tours of Israel.On the cliffs high above the Mediterranean, just north of Tel Aviv lie the ruins of one of the most impenetrable fortresses in all of the Holy Land. The views, surrounding wildlife and ancient architecture are truly breathtaking. The real surprise here however is the almost complete lack of visitors. On almost every occasion that I have come to visit the Apollonia-Tel Arshaf National Park, my tourists and I have had the entire place to ourselves save for a few wild foxes and the park rangers. This place is surely a tour guide’s dream. But don't let the tranquil setting and the peaceful sounds of the waves washing up on the shore fool you; this place has cemented itself amongst historians as one of the most famous military battle sites in history.Take the Coastal Highway (Route 2) north from Tel Aviv. Get off at the Rabin-Shmaryahu Interchange and cross over the highway onto Keren Hayesod Street for about a kilometer and a half. At the second traffic circle make a right onto Wingate, which later changes its name to Golda Meir Street which after making a slight left turns into Yigal Yadin Street. From here follow the signs to the National Park. 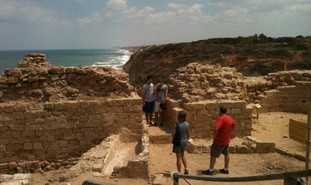 (Joe Yudin)
The earliest settlement at Arshaf was during the Iron Age. The northern Kingdom of Israel had been destroyed in 722 BCE by the Assyrians and the Phoenicians extended their reach from what is today Lebanon down the coast of the Land of Israel. There was a small cove surrounded by high cliffs that enabled them to establish an important sea port between Jaffa and Acre, as well as a multitude of sea snails in the area used in the production of the then world renowned Phoenician purple dye. The name of the city "Arshaf" probably refers to the Semitic god of lightning bolts called Reshef. The Greeks apparently identified Reshef with Apollo hence the name change in the fourth century BCE after Alexander the Great’s conquest of Judea.  Josephus recalls that the Jewish-Maccabean king of Judea, Alexander Yannai, conquered Apollonia in the early first century BCE only to be taken by the Romans mid-century. Under Roman and Byzantine rule it flourished as an important sea port and trade center until the Muslim conquest in the seventh century CE, when it reverted back to its original name with an Arabic twist: Arsuf. By the 11th century CE, the Egyptian Arab rulers of Palestine were becoming less tolerant of the "People of the Book" and the Church of the Holy Sepulcher and other houses of worship were ordered destroyed. This upset a few Christians, Catholic & Orthodox alike. By March of 1095 the Seljuk (Turkish-Persian) armies had overrun most of the Byzantine Empire and were now knocking on the door of Constantinople, the eastern gateway to Europe. Most of Spain, the western gateway to Europe, had already been conquered by Muslim forces centuries before. The Byzantine emperor, Alexis I was in such a panic that he asked his theological nemesis, Pope Urban II to help beat back this invasion of Europe, and thus began the Crusades. 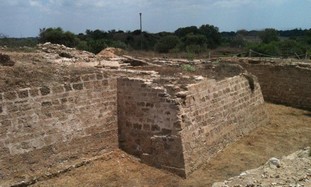 (Joe Yudin)
The various Muslim empires were weakened at the turn of the eleventh century due to rampant infighting and war. The Middle East was ripe for the taking. Pope Urban II’s charismatic call to arms led to action by serfs and nobility alike. His call for “liberation” with theological justification for a violent, murderous crusade was met in return for “indulgence” or complete forgiveness of one’s sins. Of course the first victims of the crusaders were the Jews living in Europe who were massacred, and whose villages were pillaged and burned.On July 15, 1099 the crusader armies breached the northeast walls of Jerusalem, and the Latin Kingdom of Jerusalem was established and Godfrey of Bouillon, a direct descendant of Charlemagne, became its first ruler. In 1101 Arsuf was taken by land and sea by forces led by Baldwin I, younger brother of Godfrey who had recently died. Baldwin assumed the throne in Jerusalem. In 1187, Salah al-din and his Muslim forces took Arsuf back which set the stage for a standoff between the greatest of Muslim warriors and England's own Richard the Lionhearted.In July 1191, the most important port city in the Holy Land, Acre, had fallen to the third wave of Crusading knights. Richard marched his forces down the coast from Acre to Arsuf for two weeks while under constant harassment by Saladin's forces. On September 7 Richard came under heavy attack.  A poet and chronicler from the Third Crusade, Ambroise the Norman, wrote of the battle (Atlas, Riley-Smith, p. 65): The King seeing his men break awayFrom line and charge into the frayAt once drove spurs into his steedAnd forced him to his swiftest speedCharging without delay, he madeAll haste to lend the first troops aidToward the right with fierce handHe fell upon the pagan bandWith such impetuous attackThat they were mazed and taken backAnd from their saddles hurled and thrownSo that sheaves of grain thick strewnYe had seen them lying on earthAnd England's king of valiant worthTook after them and close pursuedThem, with such skill and fortitudeThat round him all the road was filledWith Saracens who had been killed.They smote to left and smote to right:Then were the Turks in sorry plight.Ye had seen men of valor wieldTheir arms, men bloody leave the field;Ye had seen many a rich-hued flagDrop down into the dust, and drag. 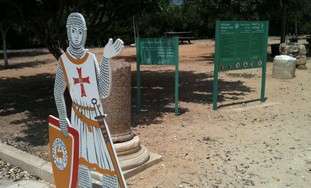 (Joe Yudin)
With this victory, Richard the Lionhearted sealed his place in history and Christian lore. He did secure the coast for another sixty years but he would never reach Jerusalem. Arsuf was rebuilt and bought by the Order of Knight Hospitaller. Despite building fortifications here at Arsuf, the town and fortress fell to the sultan Baybars and his Mamluk forces after a forty-day siege in 1265. The knights only surrendered to Baybars after a personal guarantee of safe passage to Cyprus by Baybars, who later reneged on his promise and sold the Hospitallers off into slavery.Check out the ruins of the moat, Roman villa, walls, loopholes, drawbridge, and many fortifications in the fortress itself. There are incredible views as well. Sit back, relax and enjoy.Joe Yudin became a licensed tour guide in 1999. He completed his Master’s degree at the University of Haifa in the Land  of Israel Studies and is currently studying toward a PhD.
Advertisement
Subscribe for our daily newsletter