Sights and Insights: More than an oasis in the desert

In a barren region that has struggled to support life since the destruction of Sodom and Gomorrah, Ein Gedi has flowed for thousands of years.

By WAYNE STILES
Ein Gedi hike
(photo credit: BiblePlaces.com)
Advertisement
Wayne Stiles is an author who has never recovered from his travels in Israel—and loves to write about them from his desk in Texas.Ancient travelers who made their way along the shores of the Dead Sea would no doubt shake their heads when they saw it. How could so much water stand in such a barren place—and none of it be drinkable?  Before the obliteration of Sodom and Gomorrah, the Jordan Valley looked like the “garden of the Lord” (Genesis 13:10). But afterwards, even the many springs that bubbled beside the Dead Sea tasted too salty to swallow. The plentiful waters gave nothing in the way of sustenance. They only offered a spiritual prompt of the need to take God seriously. 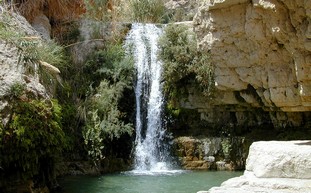 Photo: BiblePlaces.comAgainst this depressing backdrop of death and desperation flows the spring of Ein Gedi. Its name means, “Spring of the Wild Goat,” and suggests that animals—as well as people—depended upon its fresh and plentiful streams (1 Samuel 24:1-2). Because Ein Gedi represented one of only two springs that offered fresh water west of the Dead Sea, every nomad, wanderer, and warrior stopped there as they passed. The Bible records Ammonites, Edomites, Meunites, and Moabites—Judah’s neighbors east of the Jordan—gathering there before their attack on Jehoshaphat (2 Chronicles 20:1-2). 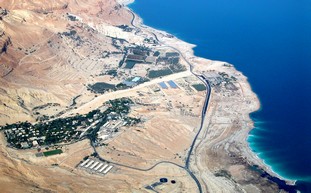 Photo: BiblePlaces.comBut Ein Gedi served as more than a popular pit stop for travelers. With regional water so scant, the spring hosted numerous settlements throughout history—thousands of years of continuous habitation. God allotted Ein Gedi to the tribe of Judah (Joshua 15:62), from which came David. David’s familiarity with the oasis and its caves allowed him to select hiding places from the jealous King Saul (1 Samuel 23-24). David may have written Psalms 57 and 142 here, as the superscription for each psalm mentions David composing them in a cave. 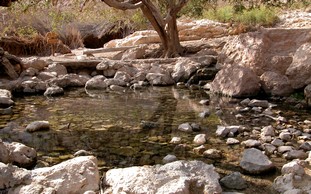 Photo: BiblePlaces.comThe Hasmoneans made Ein Gedi their royal estate and administrative center in the 2nd-century BC. Eusebius described Ein Gedi in his Onomasticon as being “a very large village of Jews.” The area has a Canaanite temple as well as Roman forts, a Byzantine fort, and an Israelite fort—all situated to protect the nearby roadway.
A vibrant blotch of green on an otherwise colorless landscape, Ein Gedi came to symbolize not only beauty, but also that which stands out as unique. David’s son, Solomon, is compared to “a cluster of henna blossoms in the vineyards of Engedi” (Song of Solomon 1:14).
Even today, the Ein Gedi National Park remains a distinctive oasis for flora and f 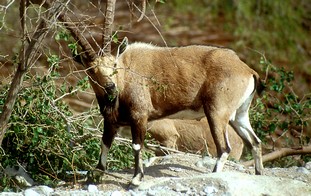 Photo: BiblePlaces.comauna. The flora grows near the streams and includes cattails, reeds, the Christ-thorn, the Sodom apple, and the acacia tree. Mosses and ferns cling to the cliffs.  The fauna include hyraxes (coneys that look like large rodents), desert leopards, and panthers. But the most common animal visitors see is the ibex, a wild Nubian goat. With hooves that make climbing look relaxed, they scamper across the cliffs effortlessly. Their piercing brown eyes and distinctive horns capture the attention of every hiker who sees them. The Visitors Center offers maps for several levels of hiking and various lengths of trails. Hikes can last from one hour to seven. The most popular trail follows the Wadi David’s stream—which flows from the immense Shulamit falls—and requires a leisurely hour round-trip. For those guests who want some pampering, the Ein Gedi Health Spa (about 4 km south of the national park) offers hot sulfur baths as well as private access to the Dead Sea.
Exaggeration fails to describe the relief that Ein Gedi would have given the weary traveler in antiquity. Even today, the oasis offers refreshment for the locals and the tourists alike.
In this barren region that has struggled to support life since the destruction of Sodom and Gomorrah, Ein Gedi has flowed for thousands of years like a longstanding testimony to God’s grace. How to Get There:
From the Jericho area, travel south along Route 90 to the Ein Gedi National Park.What to Do There:
The Visitors Center offers helpful information of all there is to see. The main interest centers on the flowing water, including hiking trails along the Wadi David and the Arugot Stream. The first-timer should hike the easy trail along the Wadi David; a more experienced hiker would enjoy the Upper David Trail and the Tsafit Trail.  Read Wayne’s blog and subscribe to his weekly Podcast at www.waynestiles.com.