Sights and Insights: Praying for rain, reading for life

The best kind of water supply is a spring, referred to as “living water,” because it flows.

By WAYNE STILES
Caesarea Philippi spring DO NOT REPUBLISH
(photo credit: BiblePlaces.com)
Advertisement
Wayne Stiles is an author who has never recovered from his travels in Israel—and loves to write about them from his desk in Texas.As the rainy season begins, the High Holidays draw to a close with the celebration of Shemini Atzeret, which means, “the assembly of the eighth [day].” After the week of Succot, according to Leviticus 23:36, “On the eighth day you shall have a holy convocation and present an offering by fire to the Lord; it is an assembly. You shall do no laborious work.” Following the destruction of the Temple in AD 70, the act of bringing a sacrifice to God was replaced with the tradition of praying for rain, called Tefilat Hageshem. The prayer remains the only exclusive ritual of Shemini Atzeret; in fact, the holiday marks the beginning of the rainy season. The holiday also is celebrated in connection with Simhat Torah, a day of rejoicing in the Word of God. Simchat Torah represents the end of the annual cycle of Torah readings. It also signifies the beginning of another year’s readings. 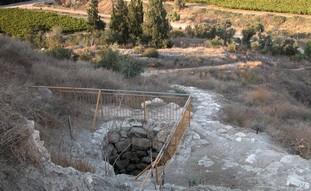 Photo: BiblePlaces.comWhether or not the connection is intentional, I find it instructive that the prayer for rain comes on a day when there is much rejoicing over the Scriptures. This connection between rain and the Word of God is biblical, as the rain serves as a continual reminder of the purpose for the regular reading of God’s Word: “For as the rain and the snow come down from heaven, and do not return there without watering the earth and making it bear and sprout, and furnishing seed to the sower and bread to the eater; so will my word be which goes forth from my mouth; it will not return to me empty, without accomplishing what I desire, and without succeeding in the matter for which I sent it” (Isaiah 55:10–11). One of the most important geographical features of Israel was (and still is) its lack of a natural abundance of water. Unlike Egypt, which had the Nile, and unlike Mesopotamia, which had the Tigris and Euphrates, God specifically told Israel he was taking them to a place that “drinks water from the rain of heaven” (Deuteronomy 11:11). In Egypt and Mesopotamia, with little need for rain, the main deities were gods of the sun, Amon-Re and Marduk respectively. But when the Hebrews entered Canaan, they found the locals worshipped Baal, a god of rain. 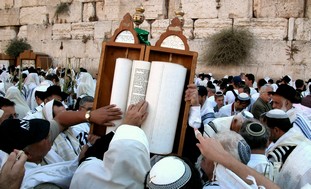 Photo: BiblePlaces.comThe need to pray for rain reveals that the land God chose for his people was not arbitrary, because he designed even the land itself to develop their spiritual lives. God used a simple, physical resource like water to teach the spiritual truth that He alone is the true source of life.Since water remained the most important variable in the land of Israel, God used the climate to encourage his people to trust and obey Him. For obedience God sent rain; for disobedience God sent drought (Deuteronomy 28). Now that’s motivation! Even today, the rains in Israel remain vital and regularly make headlines. The largest reservoir in the country is the Kinneret (the Sea of Galilee), which supplies its water to most of the country via the National Water Carrier. How the rains affect the Kinneret’s level is a constant source of concern. But before modernity allowed the Kinneret’s water to be piped throughout the country, Israelites were dependent on local, natural sources of water. The best kind of water supply was a spring, referred to as “living water,” because it flowed. A prime example of this is the springs around Caesarea Philippi, which form the headwaters of the Jordan River. The second-best kind of water source was a well, although while not flowing, it provided a steady supply. Tourists can visit a well at Tel Lachish. The least preferred source of water was a cistern, dug and plastered by hand, the cistern simply held rainwater runoff. Masada boasts one of the largest cisterns in Israel. 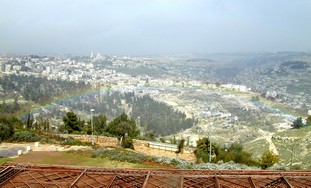 Photo: BiblePlaces.comBecause of water’s vitality to the land of Israel, God often drew upon its imagery in Scripture to teach valuable lessons. Living water represents water drunk from its very source, like a spring. Cisterns can represent that which someone provides for himself or herself; the imagery suggests that a direct relationship to the Lord is incomparable to any substitute (Jeremiah 2:12-13). Thirst for water is like a spiritual thirst that only God can fulfill (Psalm 42:1; 63:1). An enemy is likened to water that runs off an impervious object; with God we are impervious to attacks outside His will (Psalm 58:7). Water represents God’s literal blessing on the earth through the giving of rain (Psalm 65:9-13; 72:6-7; Micah 5:7). An increase, or a lack of water, represents God’s blessing, or lack thereof, on the land (Psalm 107:33-28). Water represents sexual joy in marriage; just as a personal fountain was enjoyed privately, so the pleasure is not to be shared with anyone but one’s spouse (Proverbs 5:15-18). The holidays of Shemini Atzeret and Simchat Torah offer complimentary lessons. The need for rain illustrates our need for the truth found in the Scriptures. God places us in a location that requires dependence on Him for our very survival. Just as the prayer for rain is cyclical—as is the reading of the Torah—so also our dependence on the Lord for life and spiritual life never ceases. What to Do There:
Visit the springs and headwaters of the Jordan River at Caesarea Philippi, the well at Tel Lachish, or the cistern at Masada. At any of these places, read Deuteronomy 11 and 28.Read Wayne’s blog and subscribe to his weekly Podcast at www.waynestiles.com.