Sites and Insights: Gates of Jerusalem

There are 8 gates of Jerusalem today; but the Bible promises 12 in the future.

By WAYNE STILES
JUNE 18, 2012 17:47
Jerusalem Light Festival, Damascus Gate
(photo credit: Courtesy)
Advertisement
Wayne Stiles has never recovered from his travels in the Holy Land. Follow him on Twitter (@WayneStiles) or on his blog at www.waynestiles.com.The walls and gates of Jerusalem have expanded and contracted over the centuries like the breathing of a living being. The walls of the Old City of Jerusalem are such that we have to enter through the gates—just as people did for thousands of years. Gates were more than passageways. They served as places for personal business and civic affairs (see Ruth 4:1). Gates often took their names from the distant cities they faced, like Jaffa, Damascus, and Shechem. The gates of Jerusalem today mostly date from the time when Suleiman the Magnificent rebuilt the walls around 1537. Moving counterclockwise around the wall:
Jaffa Gate 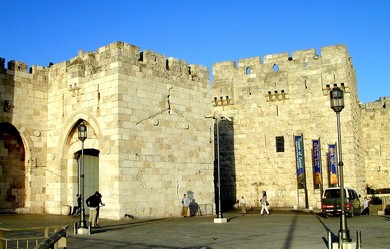 Jaffa Gate (BiblePlaces.com)Because the Jaffa Gate also faces Hebron, where Abraham is buried, Arabs call the gate, Bab el-Khalil, “Gate of the Friend,” because of Isaiah 41:8. The gate offers easy access to the Citadel Museum and a walk on the ramparts. General Allenby memorably entered Jerusalem in 1917 through the Jaffa Gate.Zion Gate 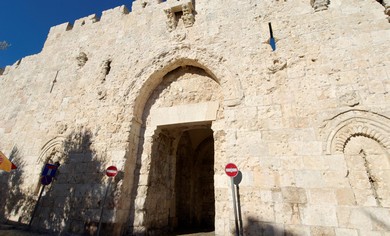 Zion Gate (BiblePlaces.com)Immediately south of this gate sits modern “Mount Zion.” Its Arabic name, Bab Nabi Daud, “Gate of the Prophet David”—came about because David’s tomb supposedly rests on Mount Zion. A misnomer on all counts, biblical Zion (as well as David’s Tomb), rests east of its modern designation. The gate wears a pockmarked facade, voiceless scars from the fierce fighting for the Jewish Quarter in 1948. Dung Gate 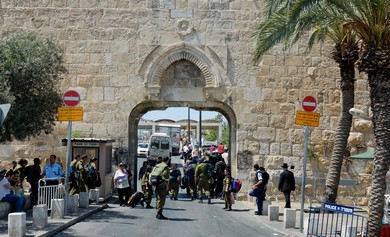 Dung Gate (BiblePlaes.com)The unusual name stems from a gate that stood along the city’s south wall in the time of Nehemiah (Nehemiah 2:13). The Targum identifies the Dung Gate as the “Potsherd Gate” of Jeremiah 19:2. In antiquity, the city dump lay in the nearby Hinnom Valley, and the Potsherd Gate served as the exit by which the citizens took out the garbage. Golden Gate 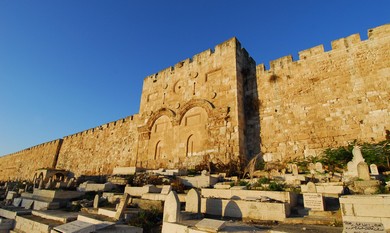 Golden Gate (BiblePlaces.com)Bricked closed for more than 1,000 years, this gate is sometimes confused with the “Beautiful Gate” of the Second Temple (Acts 3:10). Muslim tradition holds that a conqueror or the Messiah will enter through this gate. Indeed, the Bible does predict the glory of the Lord will enter the Temple by means of “the eastern gate” (Ezekiel 43:4), but who knows if it refers to this one. Regardless, no bricked gate will deter the Messiah.  Stephen’s Gate 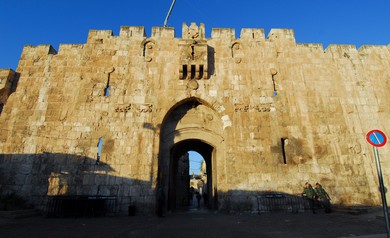 Stephen's Gate (BiblePlaces.com)Christians have identified this gate with Stephen’s name in honor of his martyrdom outside the city (Acts 7:58-60). However, Byzantines placed his death outside a northern gate.  Another name, “Lion’s Gate,” comes from the stone reliefs of two lions (or panthers or jaguars) that flank the gate. Herod’s Gate 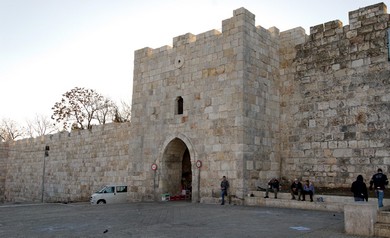 Herod's Gate (BiblePlaces.com)Sometimes called the “Gate of Flowers,” or Bab ez-Zahar, this gate took Herod’s name in the 16th or 17th century because pilgrims mistook a Mamluk house near the gate to be Herod Antipas’ palace. In this area the Crusaders penetrated the walls to capture the city in 1099. Damascus Gate 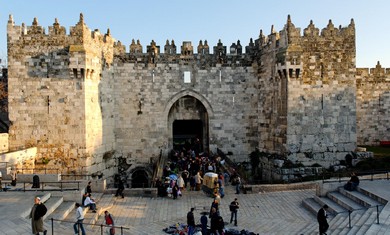 Damascus Gate (BiblePlaces.com)A fine example of Ottoman architecture, this is the most beautiful of the gates of Jerusalem. Excavations below the gate reveal a triple-arched gateway that Hadrian built—the northern extent of the Cardo street from the second century. Outside the gate, an Arab market offers fresh fruit and vegetables.  The Jews call it the “Shechem Gate,” and the Arabs refer to it as the "Gate of the Column.”New Gate 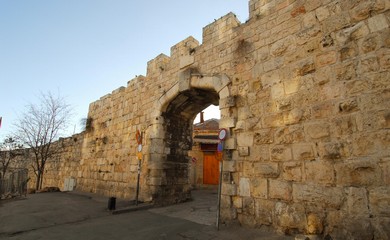 New Gate (BiblePlaces.com)The antiquity of the city walls is betrayed by the “New Gate,” opened in 1887 as a means of convenient northwest access to the Old City. I lodged for a week in the Christian Quarter years ago, grateful for the easy access the New Gate allowed to the city streets. The Future Gates of Jerusalem The 8 gates of Jerusalem have stood for centuries. But the Prophet Ezekiel predicted a day when the gates of Jerusalem would total 12—one for each of Israel’s tribes (Ezekiel 48:31-34).Ezekiel also mentions that when the Messiah reigns in Jerusalem, the city will even receive an additional name: “The Lord is There.” Wayne Stiles has never recovered from his travels in the Holy Land. Follow him on Twitter (@WayneStiles) or on his blog at www.waynestiles.com.Follow @JPost_Lifestyle
Advertisement
Subscribe for our daily newsletter