Among trees and nature, the base of the Mount of Olives was once the meeting place for Jesus and his disciples.

By WAYNE STILES
NOVEMBER 4, 2012 17:16
Garden of Gethsemane
(photo credit: BiblePlaces.com)
Advertisement
Wayne Stiles has never recovered from his travels in the Holy Land. Follow him on Twitter (@WayneStiles) or on his blog at www.waynestiles.com.No Christian pilgrim who visits Jerusalem misses the Garden of Gethsemane. The small section tourists get to see represents only a portion from the large groves of olive trees that still grace the slopes. The olive trees open to the public crouch behind the rock walls of the Church of All Nations. Beautifully manicured pathways accent about a dozen ancient trees. These grow behind black handrails to protect the branches from souvenir-snatching visitors. Today, crowds shuffle through the tiny garden like cattle through the Fort Worth Stockyards. But on the early morning of April 3, AD 33, no Christian would have wanted to be there. In fact, the few who were there scattered like rabbits. Tradition points to a place at the base of the Mount of Olives as the site where Jesus and his disciples often met. It lies directly in line where the ancient path descended the slope from Bethany. The name Gethsemane means, “oil press,” and inside a small cave beside the garden archaeologists have uncovered an ancient press. The Byzantines believed this grotto represented the place where Jesus left eight of his disciples while he took three others to pray a short distance away. After asking the three to pray, Jesus walked about a “stone’s throw” further to pray alone (Luke 22:41). 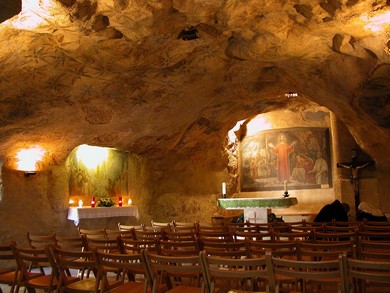 The geography of these events is represented in what we see today. A short distance from the grotto sits the trees of Garden of Gethsemane where Jesus would have left the three. A stone’s throw from these trees stands the beautiful Church of All Nations, which covers the traditional place where Jesus prayed alone in the early morning of his arrest.Three churches have stood over the site that the Christian community prior to Constantine authenticated by their veneration. The Byzantines constructed between AD 379 and 384what Egeria would refer to as an “elegant church.” The Crusaders rebuilt the church and expanded it around 1170. Today’s Church of All Nations gets its name from the countries that contributed to its construction between 1919 and 1924. Its facade has a beautiful mosaic that depicts Jesus in prayer. Inside, beautiful paintings and a wrought-iron vine of thorns surround a 10-square-foot mass of limestone, called the “Rock of Agony,” the traditional spot where Jesus prayed.Beside the church, about a dozen olives trees stand in a small garden, about 50 feet square, with colorful blooms planted to accent the trees and the gravel pathways that surround them. 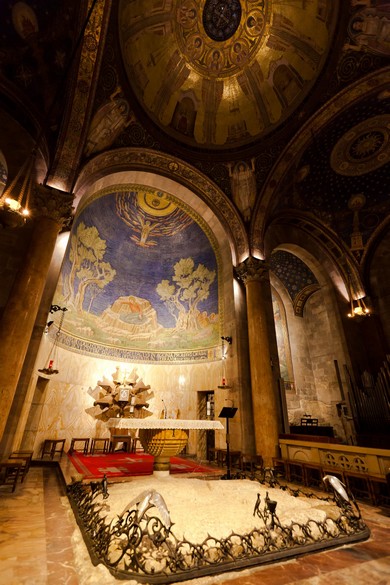 BiblePlaces.comOutside in the garden itself, the massive, gnarled trunks produce new shoots, although the trees themselves are ancient. Olive trees have no rings, so it’s tough to determine their age. However, several olive trees in the Garden of Gethsemane date to about 900 years ago according to a recent three-year study by the National Research Council. The age of these trees coincide with the time the Crusaders came to Jerusalem. However, the roots of the modern trees go back much further—and may represent the offshoots of the trees from the first century. It’s fairly certain that none of the trees standing today ever beheld Jesus in prayer that fateful night. When Titus’ legions needed wood for campfires and for their siege works against Jerusalem in AD 70, Gethsemane’s olive trees would likely have been the first to go. According to Josephus, the legions camped on the Mount of Olives (War 5:2.3).  The modest Garden of Gethsemane that visitors see is indeed beautiful. But a more authentic way to experience the garden lies across the street that descends from the Mount of Olives. After securing permission from the priests, one may enter a vast grove of olive trees much more accessible and touchable. Here a visitor can actually sit on the ground and enjoy an unhurried reading of the story from Matthew 26:30-56. 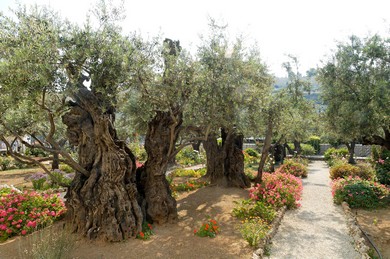 BiblePlaces.comThe last time I was in this part of the garden, I saw an American tourist wearing shorts, a ball cap, and a 35-mm camera. But this man looked different than a typical pilgrim. All alone, he wandered into a corner beside a massive olive tree. Unashamed, he stood there for minutes clinging to a gnarled trunk—and weeping. Wayne Stiles has never recovered from his travels in the Holy Land. Follow him on Twitter (@WayneStiles) or on his blog at www.waynestiles.com.Follow @JPost_Lifestyle