Sites and Insights: Hebron, cave of the patriarchs

Uniting Jews, Christians and Muslims, many biblical tombs reside in the ancient city of Hebron.

By WAYNE STILES
Hebron Machpelah 370
(photo credit: BiblePlaces.com)
Advertisement
Wayne Stiles has never recovered from his travels in the Holy Land. Follow him on Twitter (@WayneStiles) or on his blog at www.waynestiles.com.Towering like a fortress over the shoddy buildings that surround it, the ancient structure in Hebron covers a site sacred to Jews, Christians, and Muslims. In elevation, Hebron stands taller than even Jerusalem. And other than the Temple Mount itself, no other place remains as revered to peoples whose hopes and faiths could not be more diverse. The building covers the Cave of the Patriarchs, the place the Bible refers to as the burial ground for the Hebrew patriarchs and their wives. In the first century BC, Herod the Great constructed a massive wall around the cave—a beautiful edifice with construction techniques similar to those of the Temple Mount. As with Jerusalem’s Western Wall Tunnel, the massive size of the foundation stones surrounding the Cave of the Patriarchs inspires awe to all who see them. With Herod’s signature relief framing the edges, each stone sits slightly offset from the one beneath it, providing the optical illusion of both loftiness and grandeur. Inside the wall, the pavement also dates to Herod’s day. As centuries passed, the four sides of the structure would include porticoes, and a partition divided the different faiths that came to visit. The Augustinian Canons rediscovered the Cave of the Patriarchs below Herod’s structure in AD 1119. For a time, anyone could visit the underground area. But by the end of the 13th century, no one from the general public was allowed in the cave. 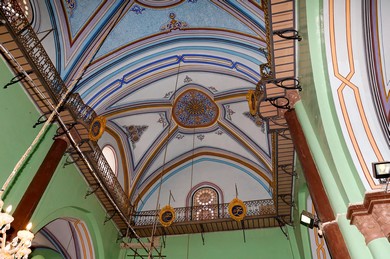 Hebron Machpelah, Isaac hall ceiling (BiblePlaces.com)
The monochrome exterior blends with its drab surroundings. But inside the colors and architecture vary wildly—betraying the hodgepodge of intentions imposed on it throughout the centuries. The Crusader ceiling looks beautiful, as does the ornate wooden pulpit Saladin donated in 1191 after burning Ashkelon. Today, the magnificent pulpit sits beside Isaac’s cenotaph (a tomb marker or monument).Because the cave remains inaccessible, cenotaphs stand to commemorate the patriarchs buried below. Visitors can see the cenotaphs of Abraham, Isaac, Jacob, Rebecca, Leah, and Sarah. A padlocked trap door covers a shaft that descends to the Cave of the Patriarchs below where the patriarchs lay. 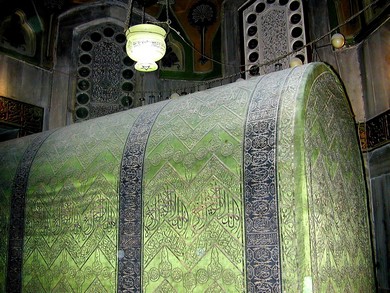 Hebron Machpelah, Abraham (BiblePlaces.com)
It’s ironic that the only part of the land Abraham actually owned—though God promised him all of it—was this burial plot in Hebron. In fact, Abraham lived for sixty-two years in the Promised Land before owning any of it. Abraham haggled for the purchase and ultimately paid 400 silver shekels for the cave. Like many pilgrims in Israel today, the result of haggling is still paying way too much.When God called Abraham to leave his homeland and his idols in order to follow the true God, the old man walked away from everything familiar (Genesis 12:1-4; Joshua 24:2-3). Abraham and his many descendants would die before ever receiving all God promised. “All these died in faith, without receiving the promises,” the book of Hebrews reminds us, “having confessed that they were strangers and exiles on the earth” (Hebrews 11:13). Either God reneged on His promise to Abraham, or the promise proves—and even demands—a resurrection. 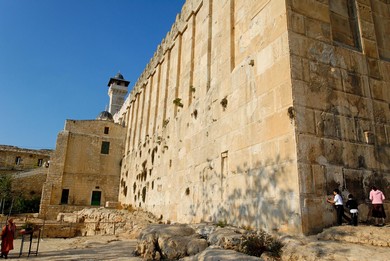 Hebron Machpelah (BiblePlaces.com)
Both Isaac and Ishmael laid their father Abraham to rest at this site (Genesis 25:9). Their diverging lines of descendants share a common lineage to Abraham—but today they struggle to share even the same site that commemorates him. As a result of the unpredictable—and even volatile—tensions between the Muslims and Jews who share the modern building, visitors would do well to predetermine whether or not a visit to Hebron is safe.Wayne Stiles has never recovered from his travels in the Holy Land. Follow him on Twitter (@WayneStiles) or on his blog at www.waynestiles.com.Follow @JPost_Lifestyle
Advertisement
Subscribe for our daily newsletter