Discovering the Jerusalem from the time of Jesus

Every wondered what Jerusalem looked like 2000 years ago? Archeological finds in the Jewish Quarter yield clues.

By ARIEL BEN AMI
Ancient Jerusalem mosaic floor found in the reception hall
(photo credit: Courtesy)
Advertisement
For further information on Christian tourism and Holy Land Tours to Israel contact  Travelujah.What did Jerusalem look like in Jesus' days? For most of Christian history, this question remained shrouded in mystery.When the Temple and city were destroyed by the Romans in 70 A.D., the ruins remained buried for nearly two millennia - even after the Jewish People began to return to the Land of Israel at the end of the nineteenth century. During the war of Independence (1948), the Jewish Quarter of the Old City was largely destroyed by the Jordanians and it remained off limits to Jews for 19 years, until Israel retook the Old City during the Six Day War (1967).After the Six Day War, during the renovation of the Jewish Quarter (1967-82), the ancient site was uncovered, revealing spectacular finds: a luxurious Second Temple period residential quarter in the Upper City of Jerusalem. Because of its grandeur and opulence, it was renamed the Herodian Quarter, also known today as the Wohl Museum of Archeology.In the days when Jesus came up to Jerusalem every year to celebrate the Jewish festivals, the wealthy aristocratic and priestly families lived in the magnificent houses of the Herodian Quarter. It is easy to see why this area, built on a hillside overlooking the nearby Temple Mount, would have been particularly attractive to priests who ministered in the Temple every day.Today, this is the largest and most important site from Second Temple times that can still be seen in Jerusalem's Jewish Quarter. Perhaps even some of the priests and Sadducees whom the Gospels recall as disputing with Jesus, lived in these houses.Descending three meters below the present ground level, we go back 2,000 years in time, to the upper city of Jerusalem in the Herodian period.The archeological remains of the cellars of six luxurious homes - probably then two stories in height - provide a vivid picture of the inhabitants' wealth. Numerous storage rooms, reservoirs, bathhouses and ritual baths, ovens, colorful mosaics, frescoes, elegant household items and other decorative adornments led archaeologists to conclude that the residents enjoyed a very high standard of living. 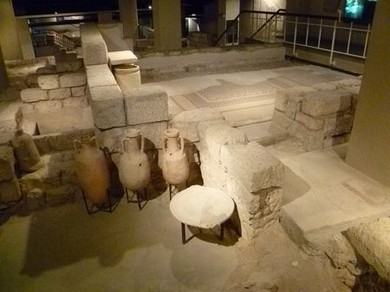 Ancient Jerusalem home cellar (Courtesy)One unique find is the seven-branched menorah (candelabra) carved on one of the walls. This is the oldest explicit depiction of the menorah, and it was probably carved by a person who had actually seen the original menorah, still at use at that time in the Temple.Throughout the museum there are displays of terra cotta tableware, imported amphorae for wine and delicate flasks. The presence of several ritual baths and many stone vessels are an indication that the residents were priests who strictly adhered to the Jewish laws of ritual purity, because stone vessels were not subjected to ritual impurity.Comparative pictures in the museum show how the site developed over the years, with illustrations of the Jewish Quarter in the 1940s (before it was destroyed in the War of Independence), during the excavations in the 1970s, and the rebuilt Jewish Quarter in the 1990s.On the eastern side of the site, we arrive at a row of columns that belonged to a "peristyle" - a colonnade surrounding an open court - which formed part of an especially fine mansion. The Peristyle Building testifies to the wealth of the neighborhood and to how the inhabitants designed their homes meticulously in the Greco-Roman style that was popular in those times. From here the residents would have had a splendid view of the Temple esplanade where Jesus spent much of his time when he was in Jerusalem. 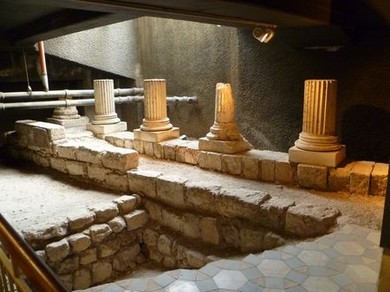 Ancient Jerusalem mosaic floor found in the reception hall (Courtesy)A little further down, there is a beautiful mosaic floor found in the reception hall of another elegant Jewish residence. Then, we come to the "palatial mansion", the largest and most splendid of the houses uncovered on the site, probably inhabited by one of the families of the High Priest.As one nears the end of the tour, a burnt room provides a glimpse of the tragic and violent end of the neighborhood and its inhabitants: The charred wooden beams that collapsed from the ceiling and the burnt mosaic stones testify to the great fire that raged in the city and to the destruction wrought by the Romans -the last moments of Jerusalem in its glory.

Model of ancient Jerusalem homes (Courtesy)
The Wohl Museum is situated just off the main square in the Jewish Quarter of the Old City of Jerusalem. Guided tours and private tours are available, as well as MP3 recorded tours. For reservations, call 02-626-5922 or visit http://www.jewish-quarter.org.il/Ariel Ben Ami was born in Canada and is currently a doctoral student at the Hebrew University of Jerusalem and writes regularly for Travelujah-Holy Land Tours. He is fascinated by the Jewish roots of Christianity and enjoys writing about biblical and theological topics. He is the founder and director of Catholics for Israel, a lay apostolate dedicated to building bridges and fostering reconciliation between Israel and the Church.
Advertisement
Subscribe for our daily newsletter