By WAYNE STILES
MAY 21, 2012 15:11
Medeba map replica, Jerusalem 370
(photo credit: Wayne Stiles)
Advertisement
Wayne Stiles has never recovered from his travels in the Holy Land. Follow him on Twitter (@WayneStiles) or on his blog at www.waynestiles.com.The celebration of Jerusalem Day commemorates the reunification of Jerusalem as a result of the Six Day War in 1967. After the liberation of the city, the Chief Rabbinate of Israel proclaimed the day a minor religious holiday in answer to the 2,000-year-old prayer: “Next Year in Jerusalem.” Although Jerusalem enjoys a reunification of control, there remains a very disjointed set of worldviews among the population. The four quarters of Jerusalem represent, in small manner, the ongoing contentions that have existed for centuries.  A crossroads that quarters JerusalemIn the second century, the Roman Emperor Hadrian got fed up with the reoccurring Jewish revolts and was determined to make Jerusalem a Roman city (actually, a non-Jewish city). He constructed a north-south road through the heart of Jerusalem, a street called the Cardo (related to the Latin term for “heart”). The east-west crossroad was called the Decumanus, a thoroughfare that stretched from the area of today’s Jaffa Gate to the city’s center. Archaeologists discovered the Cardo in the 1970s and the Decumanus in 2010 during the Jaffa Gate renovation. 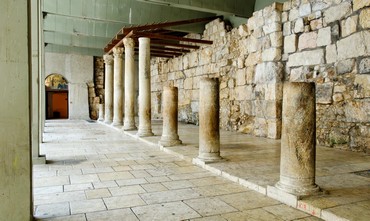 Cardo with reconstructed columns and roof (BiblePlaces.com)Whenever I visit the Cardo, I see a replica of the Medeba Map mosaic, a map that depicts the Holy Land as it was in AD 580 and shows the four quarters of Jerusalem sectioned off by the crossroads. The same divisions exist today. •    The Jewish Quarter contains, among many other significant sites, the excavated Cardo, the Western Wall plaza, and the costliest residential real estate in Jerusalem. To me, there is no more beautiful part of the Old City. •    The Armenian Quarter exists largely because the country of Armenia holds the distinction of being the first nation to officially adopt Christianity. Since the Edict of Milan in AD 313, Armenians have lived in Jerusalem. The Armenian Quarter is the smallest of the four, with the Monastery of St. James occupying most of its space. •    The Muslim Quarter takes the lion’s share of the Old City, containing more than three-quarters of its population. The quarter also includes the Temple Mount and the beautiful Church of St. Anne. •    The Christian Quarter features, most importantly, the Church of the Holy Sepulcher, the traditional location of the crucifixion, burial, and resurrection of Jesus. The quarter also houses many shops, most of which are owned by Muslims. It’s ironic that on the line between the Jewish and the Muslim Quarters, Jews bow in prayer at the Western Wall with Hebrew Scriptures in hand. And yet, on the Temple Mount just above, no Bibles are allowed. The Muslim call to prayer blares over the whole city multiple times a day, even across those quarters that ignore the call. And yet, inside St. Anne’s Church in the Muslim Quarter, Christians from around the world sing praises to Jesus many times a day. The Division and One Solution With all this diversity in the Old City, it becomes clear that there is a difference between the “reunification” of Jerusalem and the “restoration” the Bible predicts. The Prophet Zechariah promises that even though “the nations” will attack Jerusalem, the Messiah will come and bring a restoration that includes complete reunification:
“The Lord will be king over all the earth; in that day the Lord will be the only one, and His name the only one . . . and there will no longer be a curse, for Jerusalem will dwell in security” (Zechariah 14:1–11; see also Luke 21:20-27). Scattered across the skyline of the Old City today protrude all manner of crosses, crescent moons, and Stars of David—like a tangle of wheat and tares. No doubt, as Zechariah wrote, it will take a Messiah to sort it out. Wayne Stiles has never recovered from his travels in the Holy Land. Follow him on Twitter (@WayneStiles) or on his blog at www.waynestiles.com.Follow @JPost_Lifestyle