Movie aficionados, get in the spirit of the Oscars by catching one of the nominated films at these top movie spots in Jerusalem.

By LOREN MINSKY/ ITRAVELJERUSALEM.COM TEAM
Jerusalem Cinematheque
(photo credit: Courtesy)
Advertisement
1.    Jerusalem CinemathequeThe Cinemateque screens a large selection of films: classical and modern, famous and off-beat, international and local. It also serves as a cultural institution with the aim of furthering pluralism, peace and tolerance. Priding itself on screening thought-provoking cinema that tackles vast, fascinating subjects, the Cinemateque also offers the occasional Hollywood blockbuster. The venue holds a great deal of screenings and annual events, including the Jerusalem Film Festival in the summer, which is the most significant of its kind in Israel. Situated in a spectacular setting overlooking the Old City walls, the Cinemateque is a cultural haven and must for movie lovers. 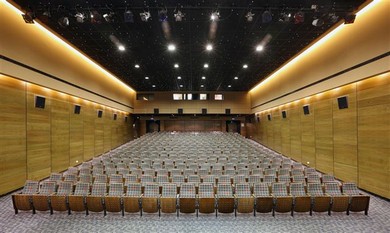 Jerusalem Cinematheque (Courtesy)
11 Hebron Road+972-2-565-43332.    Third EarThough these days most people stream films online for free, there is something special, refreshing and rare about this movie store with its enormous collection of DVDS for rent and sale. The shop, situated at the top of trendy Emek Refaim Street, feels like it belongs to another era with its fun environment and knowledgeable staff. It’s a great place to browse for hours. Inside the store, you'll even find an intimate screening room with comfortable cinema seats, a big screen and great sound, where Third Ear generally screens independent, local or lesser known productions.8 Emek Refaim Street, German Colony+972-2-563-30933. Jerusalem Theatre CinemaThe Jerusalem Theater complex not only offers an incredible selection of performing arts, but also screens a small selection of great, carefully selected films that include some of the better mainstream Hollywood films. You may want to make it into an outing and enjoy a cup of coffee in the complex’s café or browse its book and music store.20 Marcus Street, Talbiyeh+972-560-5755 4.    Lev SmadarThis unassuming, small neighbourhood cinema house has an old fashioned and warm atmosphere with its adjoining café and beer on tap. Tucked away in a beautiful, tree-lined street in the German Colony, Lev Smadar screens a handful of movies every few weeks. Because they screen only one movie at a time, it’s advisable to call beforehand to check the schedule.4 Lloyd George Street, German Colony+972-2-561-8168 5. GlobusThe Jerusalem international Convention Center (ICC), better known by its former name, Binyanei Ha’uma, houses the Globus movie theatre, one of only two multiplexes in Jerusalem. This theatre house relocated from its space in the Malha Mall. With its huge screens and powerful sound system, it is known as the place to catch mainstream films. Right across the street from the Central Bus Station, this movie theatre is centrally and conveniently located. 1 Zalman Shazar Street, City Entrance02-623-0032iTravelJerusalem.com is a new online international travel portal offering all the latest information on things to do, places to eat and places to stay in Jerusalem.
Advertisement
Subscribe for our daily newsletter