A visit to Amsterdam gives travelers a chance to explore a city that has seen Jewish flourishing, sadness.

By TANYA POWELL-JONES
Amsterdam Canal 370
(photo credit: United Photos / Reuters)
Advertisement
From the 17th century to the 20th century, Jewish immigrants enjoyed a golden age of prosperity in Amsterdam leading to the establishment of huge Jewish flea markets and glamorous cinemas. Of course, the 20th century is also when the story of a Jewish girl and her family, who hid from the Nazis in Amsterdam, became of worldwide interest and importance. Getting around the city is not difficult and there are some delicious kosher options to keep you going along the way.Some of the first Jews to settle in Amsterdam were the Portuguese Jewish merchants who arrived in c1590. Over the centuries a thriving Jewish subculture emerged. The city is often referred to in Dutch as Mokum – a name given by Ashkenazi Jews - meaning a “place” or “safe haven.”Start the day at 69 Sint Antoniebreestraat for a chance to see what life was like for the wealthy Portuguese Jews. Here stands the De Pinto House in the former Jewish quarter of the city; the de Pinto family were a well-known family of financiers, scholars and rabbis. Banker Isaac De Pinto, one of the families most prominent members, bought the house in 1651. Inside you'll see the luxurious painted ceilings that make this Italian Renaissance-style property a piece of 17th century mastery. Today, the building is used as a public library with free entry. 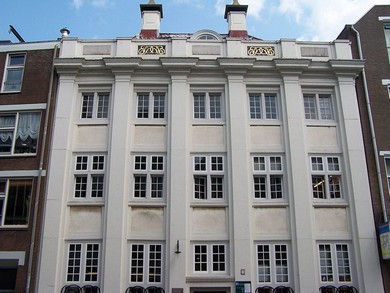 Amsterdam Sint Antoniebreestraat 69 (Wikicommons)Continue south to Jodenbreestraat 4 to the former home of one of history’s greatest artists, Rembrandt. Although not Jewish himself the Dutch painter made the Jewish quarter of Amsterdam his home. Stepping inside this museum you're immediately transported back to the 17th century and into one of Rembrandt's paintings complete with box beds and exotic objects. The museum is open weekdays 10 a.m. - 5 p.m. Admission is €12.50 for adults and €3 for children.Heading further south for a few minutes on the same street and turning on Jonas Daniël Meijerplein you'll come to the Jewish Historical Museum. This well thought-out museum in the old Jewish Quarter is a complex made up of four synagogues. The museum is full of interactive displays designed to shed light on what it meant to be a Jew in the Netherlands. The museum is is open daily from 11 a.m. – 5p.m. Admission is €6.50 for adults and €3 for children.After spending the morning peregrinating through Holland's Golden Age of prosperity there are a couple of tasty kosher options for lunch such as the café inside the Jewish historical museum. They have a lunch menu for €12,50 with the option to add some apple pie from the prize winning Kuyt patisserie. Alternatively, there is little Pinto’s restaurant on Jodenbreestraat 144, near Rembrandt’s house. They serve a range of traditional and French food. The average cost is €20 per person.For the afternoon there is Anne Frank’s house to visit, a 19th century former Jewish flea market to explore and tuschniskis expressionist-style cinema still to see.After lunch you might fancy a long stroll in Wertheimpark should you have opted for the apple pie. The park, which dates back to the early 19th century, is named after the prominent Dutch-Jewish banker and philanthropist Abraham Carl Wertheim. When walking through the park, look out for the Auschwitz monument, designed by Jan Wolkers. The monument consists of broken mirrors and a panel that details the decimation of Holland's Jewish population by the Nazis. The park is less than ten minutes walk from either restaurant via Anne Frankstraat. 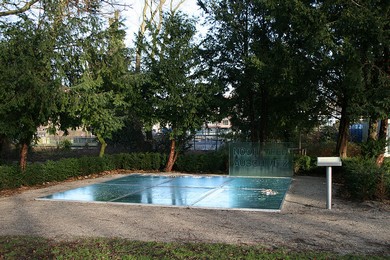 Auschwitz monument amsterdam (Wikicommons)After the park the next stop is likely to be one on the minds and lists of most travellers to Amsterdam. On July 6 1942 Anne Frank and her family entered a secret hiding place in the annex of Prinsengracht 263. Entering the house you'll step through the almost empty rooms where the family lived. There are quotes on the walls from the famous diary, pictures of Anne Frank and her family and photographs from the war.Visiting this time-capsule museum is a sobering experience no more so than seeing the markers of Anne and her sisters growth on the wall by her mother. Entry is €9 for adults, €4.50 for children and free for under 10s. Opening times vary from 9 a.m. – 7p.m. or 10 p.m. To get there go to nearby Meester Visserplein and take tram number 14 towards Slotermeer. The house is a couple of minutes walk via Westermarkt. 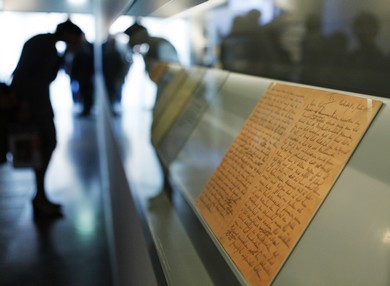 A visitor looks at the pages of Anne FrankFor the rest of the afternoon head to Waterlooplein square, which hosts a popular daily flea market. The square is on the Zwanenburgwa canal in the old Jewish quarter. The market used to be the biggest Jewish bazaar in Amsterdam when the city's Jewish community was thriving in the late 19th century. Sadly, in 1941, as the persecution of the Jews intensified under Nazi rule the market was terminated.Even though the market reopened after the war, many of Amsterdam's Jews left and headed for the newly created State of Israel meaning the market is no longer Jewish. Today, just about anything from out-of-date TV remote controls to rare collectible books or records are available. To get to the market either walk via Raadhuisstraat and Damstraat or take bus 358 from Anne Frank's house, both take around 15 minutes. The square is near the intersection with the Amstel river.To end the day there is the option of dinner at King Solomon, a kosher restaurant located at Waterlooplein 239. They serve a range of Middle Eastern dishes and the average cost is €40 per person.For something a bit more lavish there’s the Tuschniski cinema, situated between Munt tower and Rembrandtplein. The cinema is considered to be one of the most beautiful in the world and was founded in 1921 by Polish-Jewish-Dutch businessman Abraham Icek Tuschinski. Today, the Art Deco cinema belongs to Pathé and is the location for Amsterdam's red carpet premiers. As you walk into the grand entrance you'll be whisked away into a world of marble, lights and exotic art. And with love seats and private boxes available there is also the option to order wine and small meals while sitting back and relaxing.The Jewish Virtual Library contributed to this report.
Follow Tanya on Twitter - @TPowellJones.