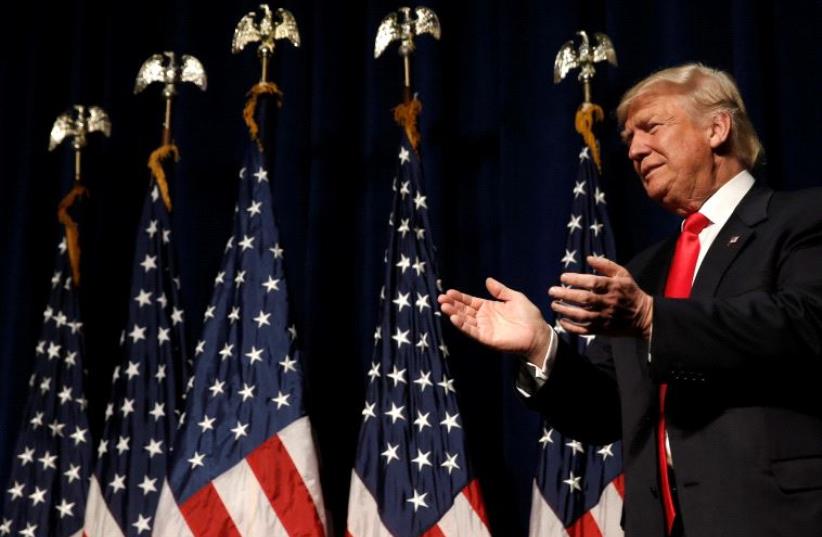 Republican presidential nominee Donald Trump.
(photo credit: REUTERS)
Advertisement
WASHINGTON - A spokesman for Republican US presidential candidate Donald Trump said on Friday that North Korea's nuclear test was an example of the "catastrophic failures" of his Democratic rival, former Secretary of State Hillary Clinton."Hillary Clinton's North Korean policy is just one more calamitous diplomatic failure from a failed Secretary of State," Trump campaign spokesman Jason Miller said in a statement. Earlier on Friday, US Secretary of State John Kerry said that the United States is prepared to do what is needed to work with allies to defend against a growing threat from North Korea."We are prepared to take whatever measures are necessary to ensure our alliances continue to defend against this growing threat to international peace and security," Kerry said in a statement.Kerry said the United States remained open to "credible and authentic" talks on the denuclearization of the Korean peninsula, but added that North Korea had shown it would not be a credible negotiating partner. Democratic presidential nominee Hillary Clinton on Friday strongly condemned North Korea's latest nuclear test and said she supported US President Barack Obama's call to increase sanctions on the East Asian country.

"I support President Obama's call to both strengthen the sanctions passed earlier this year with the United Nations and to impose additional sanctions," Clinton said in a statement.

Trump, also spoke of US policy in Iraq Friday.The presidential nominee who has often praised Russian President Vladimir Putin, criticized US policy in Iraq during an interview broadcast on a Kremlin-funded television network.The New York businessman made the comments in an interview with former CNN broadcaster Larry King, whose podcast was aired on Thursday night on RT network, a 24-hour, Russian-language news channel.Trump criticized US policy in Iraq from the days of Republican President George W. Bush, who ordered the American-led invasion in 2003 in the aftermath of the Sept. 11, 2001, al Qaeda attacks on the United States. Trump then attacked President Barack Obama and Democratic presidential candidate Hillary Clinton, Obama's first secretary of state, for their roles in the US troop withdrawal from Iraq."It's a war we shouldn't have been in, number one," Trump said in the interview. "And it's a war that, when we got out, we got out the wrong way. That's Obama."While Trump has leveled similar criticism in the past, doing so on Russian television could draw more criticism from those who have questioned his overtures to Putin, including a number of Republicans.Trump's interview surfaced as he and Clinton continue to clash over foreign policy in the run up to the Nov. 8 presidential election. In an televised national security forum on Wednesday night, the two sought to portray themselves as most fit to be commander in chief, with Trump arguing that Putin is a better leader than Obama.Clinton on Thursday said Trump's comment was "not just unpatriotic and insulting to the people of our country, as well as to our commander in chief, it is scary."Trump and his running mate, Indiana Governor Mike Pence, defended the comment. Pence called it "inarguable" that Putin is a stronger leader than the US president.House of Representatives Speaker Paul Ryan - the top elected Republican official who has frequently broken with Trump - again took a sharply different view from that of his party's candidate."Putin is an aggressor that does not share our interests. Vladimir Putin is violating the sovereignty of neighboring countries," Ryan said at his weekly news conference.Clinton was scheduled on Friday to meet with former senior national security officials in New York.Trump and Clinton's intensifying political combat over national security came as Clinton's lead in opinion polls has slipped in recent days. The current average of polls from website RealClearPolitics puts her at 45.6 percent support, compared with Trump's 42.8 percent.
Advertisement
Subscribe for our daily newsletter