Presumptive Republican nominee rebukes veteran Jewish justice after she said she "can’t imagine what the country would be" with Trump as president. 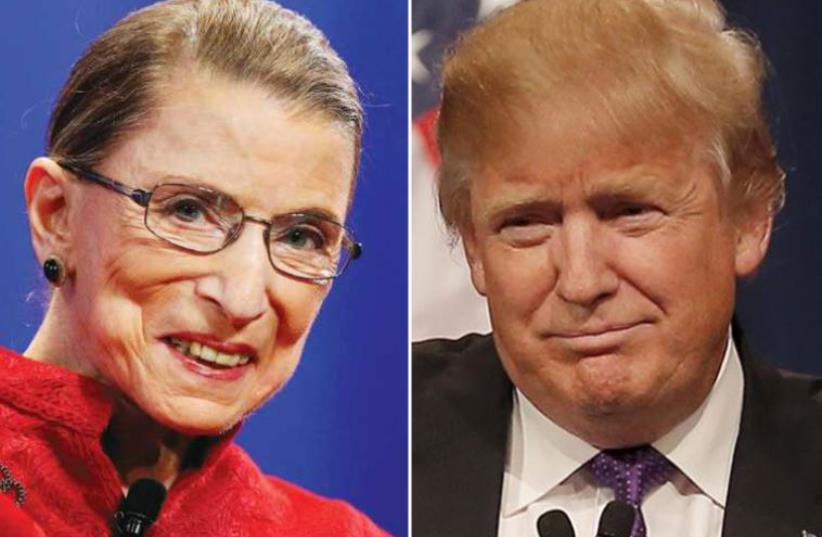 Ruth Ginsburg and Donald Trump
(photo credit: REUTERS)
Advertisement
Presumptive Republican presidential nominee Donald Trump called on Jewish US Supreme Court Justice Ruth Bader Ginsburg to resign on Wednesday in a scathing response to her censure of the billionaire real estate mogul's White House campaign. In a Twitter post, Trump fired back at the veteran justice saying "Her mind is shot - resign!" after she expressed fear over his presidential run.Ginsburg, 83, disdainfully addressed Trump's candidacy in various interviews with US media recently, saying she couldn't contemplate his win in the November election. “I can’t imagine what this place would be — I can’t imagine what the country would be — with Donald Trump as our president,” she told the New York Times in an interview published Sunday.She added that "I don't even want to contemplate" what Trump's victory would mean for the country and the Supreme Court. "Now it’s time for us to move to New Zealand," she quipped. In response, Trump indicated that Ginsburg's remarks were inappropriate, and called her comments "very dumb.""Justice Ginsburg of the U.S. Supreme Court has embarrassed all by making very dumb political statements about me. Her mind is shot - resign!" the Republican nominee known for his brash rhetoric wrote on Twitter.

Justice Ginsburg of the U.S. Supreme Court has embarrassed all by making very dumb political statements about me. Her mind is shot - resign!
— Donald J. Trump (@realDonaldTrump) July 13, 2016


Ginsburg was nominated to the lifetime post by former US president Bill Clinton in 1993. She was the second woman and first female Jewish justice appointed to the Supreme Court.