Sights and Insights: The two hundred acres of Tel Hazor remains hidden in the minds of many.

By WAYNE STILES
AUGUST 22, 2011 09:51
Tel Hazor 311
(photo credit: BiblePlaces.com)
Advertisement
Wayne Stiles is an author who has never recovered from his travels in Israel—and loves to write about them from his desk in Texas. 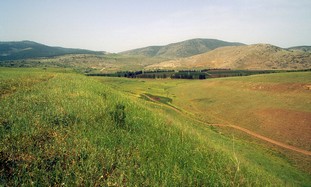 Photo: Bibleplaces.comI asked the helicopter pilot to fly to Hazor so that I could take video of the site. Before long we hovered over a modern town with houses, streets, and parks. The pilot and I exchanged awkward glances, and I clarified what I wanted, “I meant Tel Hazor.” He still looked confused.  After five minutes of searching the area, we finally saw it. Two hundred acres huge, rising from the floor of the Hula Basin, ancient Hazor looms as Israel’s largest tell. How could the pilot not have known where it was? I had to marvel at how times have changed. What was once the land’s most important city has somehow gotten lost in the weeds of contemporary minds. Along the ancient international highway, geographical chokepoints required all travelers to pass well-fortified cities. Among these, Hazor was the most important in northern Israel. All two hundred acres of Tel Hazor were occupied during the Canaanite period. In fact, Hazor stood as the largest city in Canaan during the Middle and Late Bronze Ages (2200-1400 BC). No one entered the land from the north without passing the site.The day I was at Tel Hazor, beautiful yellow flowers grew atop the tell. It struck me strange that life would grow where so many people in history had died. Before the conquest under Joshua, “Hazor formerly was the head of all these kingdoms” (Joshua 11:10). Hazor was the only city Joshua burned in the northern campaign (Joshua 11:1–15). Modern archeologists have uncovered a Canaanite temple with a central niche where a male deity figurine sat on a throne. Stratum XV of the tell had a large burn layer that corresponds with Joshua’s destruction of Hazor around 1400 BC. 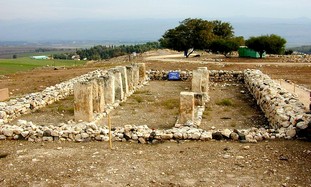 Photo: Bibleplaces.comTwo hundred years after Joshua, Hazor rose again to prominence during the years of the Judges of Israel. Deborah and Barak defeated Hazor’s general, Sisera, in the Valley of Jezreel and burned Hazor once again (Judges 4-5). Because of the city’s strategic location, King Solomon later fortified Hazor—as well as Megiddo and Gezer (1 Kings 9:15). The tripartite city gates that Solomon built in these cities still stand. All three gates are nearly identical. During the time of the divided kingdom, the Israelites at Hazor dug a forty-meter deep shaft that reached the water table. In 885 BC, Ben-hadad of Aram invaded Israel via Hazor. As the first line of defense for the north, Hazor was also one of the first cities to fall when the Assyrians invaded (2 Kings 15:29). Under the boot of the Assyrian leader, Tiglath-Pileser III, Hazor was razed in 732 BC. It never recovered. 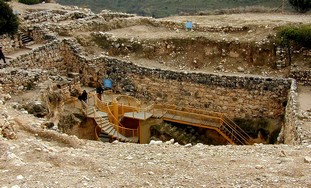 Photo: Bibleplaces.comBy the first century when Jesus passed Hazor on His way north to Caesarea Philippi, Tel Hazor stood as a mere police fort. Today, even helicopter pilots struggle to find it. How to Get There:
From Tiberias, travel north on Route 90 about 31 km. After the Mahanayim Junction, turn right toward Tel Hazor. What to Do There:
Explore the Upper and Lower Cities, including Solomon’s gate, the stables, the water system, and the remains of Canaanite buildings. Across the street by Kibbutz Ayelet Hashahar, the Hazor Museum offers explanations of the twenty-one occupation levels discovered during the tell’s numerous excavations. You can even volunteer to serve during the seasonal excavations. Video provided by Insight for Living.Read Wayne’s blog and subscribe to his weekly Podcast at www.waynestiles.com.
Advertisement
Subscribe for our daily newsletter