By REUTERS
NOVEMBER 20, 2011 17:59
Tahrir Square Clashes 311
(photo credit: REUTERS)
Advertisement
Military police in riot gear fired tear gas at demonstrators in Cairo's Tahrir Square on Sunday and some threw stones, supporting police who had earlier tried to disperse a protest in the square without success, television images showed.Protesters fled from the army and police lines, many into side streets after what appeared to be a fresh effort to clear the square, which has been occupied since Friday by protesters calling for the military council to hand power to civilians. 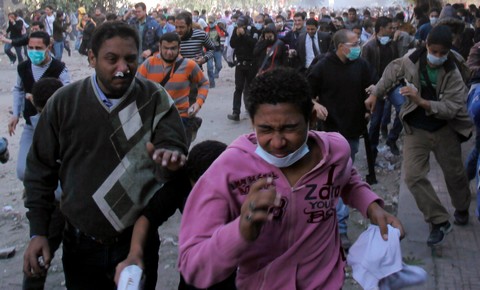 The square was largely cleared of protesters and protester banners were set ablaze. On Saturday, police without military help had cleared the square briefly before protesters returned.One group of protesters gathered to form a line as the police charged in, and began to bow in a traditional Muslim prayer ritual. Military police and other security forces, wielding batons, moved in around them.RELATED:
Sinai Beduin join al-Qaida out of bitterness, not ideology
Cashing in Egypt's black cloudPolice were shown using batons and sticks to beat some of the protesters. Some police charged towards the protesters behind riot trucks.Around the same time, more than a dozen armored personnel carriers took up positions around the Interior Ministry, a focus for protester anger at heavy-handed police tactics used to try to break up a demonstration in central Cairo, a witness said. 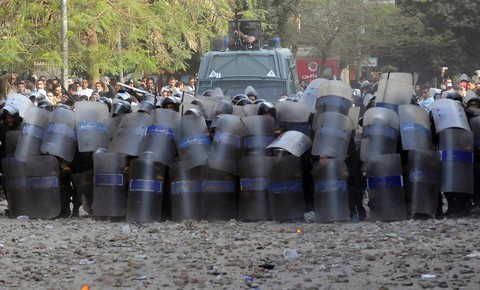 The crackdown came after clashes erupted between protesters and police in Cairo and two other Egyptian cities on Saturday, killing two people and wounding more than 700 in the biggest security challenge yet for the country's ruling generals days before scheduled elections.In Tahrir Square alone 750 were injured, Egyptian newspaper Al Aharam cited the Egyptian Health Ministry as saying. Four were injured in Alexandria and 12 in Suez.
Advertisement
Subscribe for our daily newsletter