Sights and Insights: Mt. Arbel - sentinel of the Kinneret

By WAYNE STILES
Mount Arbel 311
(photo credit: Wayne Stiles)
Advertisement
Wayne Stiles is an author who has never recovered from his travels in Israel—and loves to write about them from his desk in Texas.The sheer rock cliffs of Mount Arbel stand like a sentinel over the western side of the Sea of Galilee or Gennasaret. They have observed numerous battles, travelers, and even disciples. Mount Arbel is one of those places never mentioned in the Bible. Its presence was so obvious, it was assumed. Certainly, anyone traveling around the Sea of Galilee or along the International Highway would have used Arbel as a landmark, identifiable from most any spot on the lake. RELATED:Sights and Insights: Nazareth — A hometown with a view'Taking Megiddo is like capturing a thousand cities' 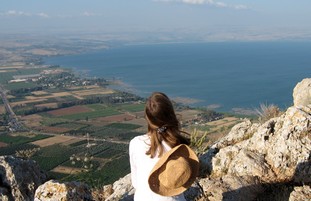 Photo: Wayne Stiles
Honeycombed with caves along its cliffs, Mount Arbel has given military refuge to various people through the centuries. Some of these include partisans of the Maccabees in 161 BC, rivals of Herod the Great in 38 BC, Josephus in AD 66, and others from the Druze Maan dynasty at the beginning of the seventeenth century. Archaeology has revealed a nearby village, a fourth-century synagogue, as well as signs of occupation in the caves as early as the second century. Josephus offers a grisly account of Arbel in his Antiquities (14:423–425). One of Herod’s soldiers grew irritated with the inaccessibility of the enemies holed up in the caves. Lowering himself in a basket, the soldier jerked out some of the cave dwellers with a grappling hook and shoved them over the cliffs. No doubt, the best way to enjoy Mount Arbel is from on top of it! (Just make sure Herod’s troops aren’t around.) The panoramic view offers a perspective that stretches 400 meters (about 1,300 feet) above the water. It astounds every first-timer. It still astounds me. I once even scaled down the cliffs with the convenient handheld cables affixed to the rocks. The last time I stood on Mount Arbel, I gazed at the modern highway on the Plain of Gennesaret far below me. Part of the ancient International Highway ran beside the Sea of Galilee—roughly where modern Route 90 runs today. I thought of the armies of history that had marched right below me. And though the history intrigues and the view inspires, the greatest benefit I’ve enjoyed from the top of Arbel comes as I see—from one location—the places where Jesus spent most of his ministry around the shores of this famous lake: Capernaum, the Cove of the Sower, the Mount of Beatitudes, Tabgha—these and other places dot the shoreline. At the foot of the cliffs of Mount Arbel also lay the village of Magdala, the hometown of Mary Magdalene.I have often wondered in pure conjecture if “the mountain” to which Jesus brought his disciples when he issued the Great Commission was Mount Arbel (Matthew 28:16-20). It really could have been. From this one spot they could observe the area where Jesus called them as disciples as well as the many places where he taught and performed miracles according to the gospels. No visit to Mount Arbel is ever long enough. It remains one of the most beautiful spots in Israel. To Get There: Take Route 7717 west from Tiberias and turn right into the Moshav Arbel. Rather than drive through the moshav, take the first left and curve around, driving as far as you can to the parking lot at the highest point of the cliff. From there you’ll have to walk uphill a bit. Be sure to arrive by early afternoon, as the site closes now at 5 PM in the summer and 4 PM in the winter! (If you arrive after that time, I’m not telling you to hop the fence or anything.) A journey down the cliffs with the handheld cables is only for the surefooted and physically fit. What to Do There: Definitely take your camera. Read Josephus’ account of Herod’s soldiers (Antiquities 14:423–425). Try to pick out the places of Jesus’s ministry along the shoreline: Capernaum, the Cove of the Sower, the Mount of Beatitudes, and Tabgha. Read the commission given in Matthew 28:16-20. You also may need to cling to the lone tree up there—as well as to your hat. It’s windy!Video is courtesy of Insight for Living.Read Wayne’s blog and subscribe to his weekly Podcast at www.waynestiles.com
Advertisement
Subscribe for our daily newsletter