In recent years, Farrakhan has embarked on a wide-ranging, anti-Jewish campaign, which has featured some of the most hateful speeches of his career. 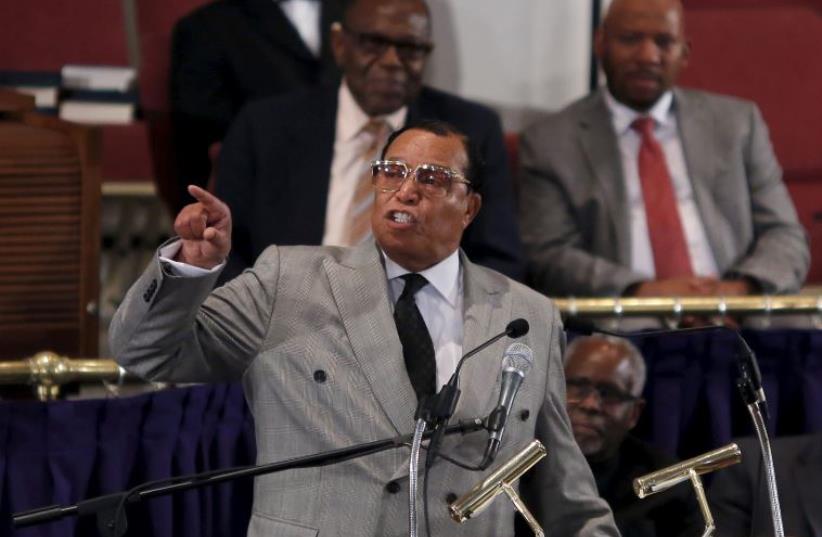 Nation of Islam leader Louis Farrakhan addresses the audience at the metropolitan African Methodist Episcopal Church in in Washington June 24, 2015.
(photo credit: REUTERS)
Advertisement
NEW YORK – High-profile leaders of the popular Women’s March movement are refusing to condemn an antisemitic speech Louis Farrakhan delivered last week.According to the Anti-Defamation League, prominent Women’s March figures Tamika Mallory, Carmen Perez and Linda Sarsour have failed to speak out against the Nation of Islam leader after he described the Jewish community as his “enemy” during a speech at the 2018 Saviour’s Day event in Chicago.“In the audience at last weekend’s conference was Tamika Mallory, one of the leaders of the Women’s March, who got a special shout-out from Farrakhan and who regularly posts laudatory pictures of him on her Instagram account as does Carmen Perez, another leader of the March,” the ADL said.“Linda Sarsour, another March organizer, spoke and participated at a Nation of Islam event in 2015. Her most notable response to his incendiary remarks this year was a glowing post on Perez’s Facebook page to praise Farrakhan’s youthful demeanor.”
Activist Linda Sarsour addresses attendees at a vigil for Nabra Hassanen, a 17 year old teenage Muslim girl killed by a bat-wielding motorist near a Virginia mosque, Manhattan, New York, U.S., June 20, 2017. / REUTERS/AMR ALFIKY
Perez refused to denounce the 84-year-old’s antisemitism and instead retorted: “There are no perfect leaders.”Mallory and Sarsour failed to respond to a request for comment by The Jerusalem Post.The Women’s March describes itself as a grassroots movement that aims to harness the political power of diverse women and their communities to create transformative social change, a statement on the group’s website explains.“Women’s March is committed to dismantling systems of oppression through nonviolent resistance and building inclusive structures guided by self-determination, dignity and respect,” it adds.Amanda Berman, head of the New York City branch of the progressive Zioness Movement, said she was dismayed that an organization devoted to social justice and tolerance had failed to speak out against such blatant bigotry.“No one expects progressive leaders – who are humans – to be perfect. We expect them to be inherently good, as opposed to profoundly racist. It would be absolutely unacceptable to Mallory, Perez and Sarsour if any other leader made heinous, bigoted comments like this about their respective communities, and therefore ironic and hypocritical beyond words that they continue to align themselves with someone with such deeply held, hateful worldviews,” Berman said.“Either the Women’s March leaders endorse the vilification of the Jewish people or they don’t – and if they don’t, why do they so vehemently refuse to unequivocally condemn it? This episode only reaffirms the Zioness Movement’s commitment to activating and empowering new leaders in the feminist movement who show up to fight for the civil and human rights of all people, not just some people,” she added.SPEAKING TO thousands of followers, Farrakhan railed against the US Jewish community’s supposed influence over the media, an antisemitic trope that has long been a popular talking point for the black nationalist leader.In one part of the address, Farrakhan said that the “Jews were responsible for all of this filth and degenerate behavior that Hollywood is putting out turning men into women and women into men.”“White folks are going down. And Satan is going down. And Farrakhan, by God’s grace, has pulled the cover off of that Satanic Jew and I’m here to say your time is up, your world is through,” Farrakhan added.Saviours’ Day is a holiday of the Nation of Islam commemorating the birth of its founder, Wallace Fard Muhammad.Other notable remarks made by Farrakhan during the his speech in Chicago included the notion that Jews are part of “the Synagogue of Satan”; that the “white people running Mexico” are Mexican-Jews; that Jews control various countries including Ukraine, France, Poland and Germany where they take advantage of the money, the culture and the business; that Jesus called Jews “the children of the devil”; and “when you want something in this world, the Jew holds the door.”He also claimed that Jews control the US government and the FBI and use marijuana to feminize black men.In an apparent response to the controversy, Mallory posted to Twitter on Friday evening: “Family... thank you for loving me and for knowing the truth about who I am. My work speaks for itself... my words have been clear... my love for people is deep. Whatever else they say about me is a LIE. Thank you for continuing to hold me up. I stand on my reputation!”

Family...thank you for loving me and for knowing the truth about who I am. My work speaks for itself...my words have been clear...my love for people is deep. Whatever else they say about me is a LIE. Thank you for continuing to hold me up. I stand on my reputation!

Funny how folks interpreted my mention of one having enemies the same as Jesus, as me describing a certain group of people. That’s your own stuff. My point...Jesus had a number of enemies as do all black leaders. Period point blank.

The ADL noted that in recent years, Farrakhan has embarked on a wide-ranging anti-Jewish campaign, which has featured some of the most hateful speeches of his career. “He has repeatedly alleged that the Jewish people were responsible for the slave trade as well as the 9/11 attacks, and that they continue conspire to control the government, the media, Hollywood, and various black individuals and organizations,” the organization said. Despite Farrakhan’s disposition toward the Jewish community, the New York native has been able to garner support from well-known politicians and public officials over the years.US Rep. Danny Davis (D-Illinois) recently praised Farrakhan as “an outstanding human being.” He later told the ADL that he was misquoted and insisted he rejects antisemitism in all forms.US Reps. Maxine Waters and Barbara Lee of California, Al Green of Texas and William Jefferson of Louisiana have also been captured embracing Farrakhan, with a video posted to YouTube in 2009 showing them coordinating a response to Hurricane Katrina.“At a time when antisemitism indisputably is on the rise and our society seems more divided, the inability of public figures to denounce the words and leadership of Farrakhan is a problem – not only for Jews, many of whom are and want to continue to be active partners in the fight against hate in this country – but also for all those who believe in equal justice and dignity for all,” ADL president Jonathan Greenblatt said.