Abbas to meet Putin in Moscow on Monday

They two leaders will discuss the long-stalled peace talks between Israel and the Palestinians as well as other issues relating to the Middle East. 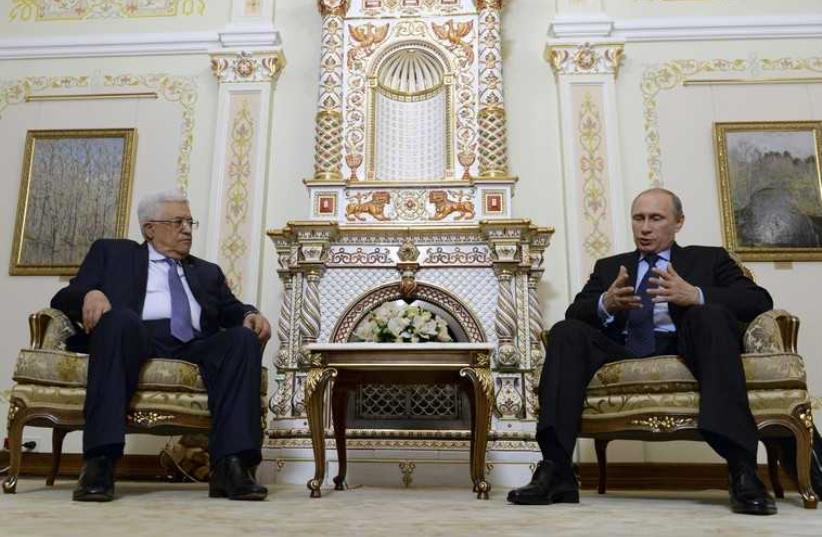 Russia's President Vladimir Putin speaks with Palestinian Authority President Mahmoud Abbas during their meeting at the Novo-Ogaryovo state residence outside Moscow June 25, 2014
(photo credit: REUTERS)
Advertisement
Palestinian Authority President Mahmoud Abbas will meet Russian President Vladimir Putin in Moscow next week, AFP reported on Thursday, citing Russian authorities."The two leaders will hold talks concerning key aspects of Russian-Palestinian relations and their future, with particular attention on the trade, economy and humanitarian sectors," the Kremlin said in a statement.Also on the agenda is the long-stalled peace negotiations between the Jewish state and the Palestinian Authority, as the two will exchange "ideas on the process of Israeli-Palestinian talks and other problematic regional situations."Palestinian ambassador to Russia Fayed Mustafa said Abbas would sign a number of intergovernmental accords during his stay in Moscow, for which he departs on Monday. The three-day visit will include a meeting with Russian Prime Minister Dmitry Medvedev that will focus on economic and investment issues.In June 2014, the Russian leader met with his Palestinian counterpart in Moscow to discuss the decades-old Israeli-Palestinian conflict.American-brokered peace negotiations collapsed at the end of April after a reconciliation deal between Abbas's Fatah party and Hamas, which controls the Gaza Strip, was announced.Russia, a close ally of the Palestinians since the Soviet era, has in the past called for east Jerusalem to be established as the capital of a future Palestinian state. Abbas has publicly referred to his visit with Putin as "a meeting of two friends."