Relating to the deadlock in peace talks between Israelis and Palestinians, Elaraby emphasized the importance of supporting the BDS movement, claiming that it might end Israeli settlement activities. 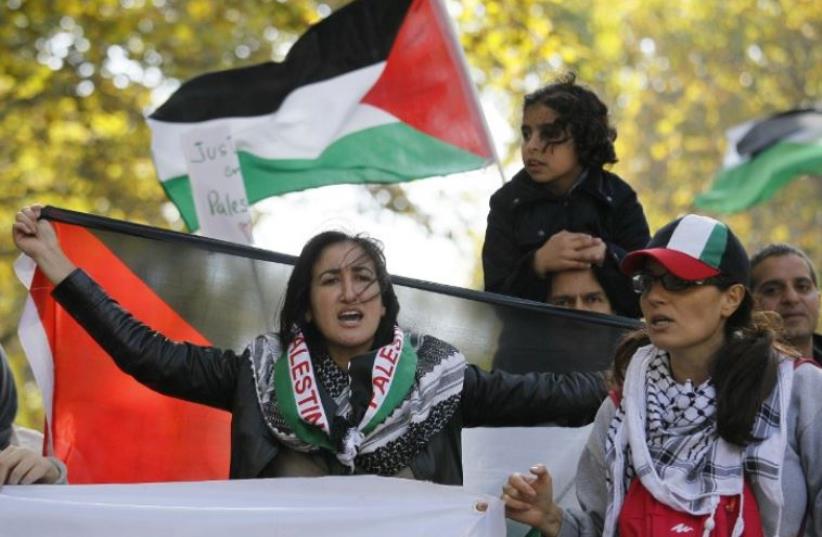 Pro-Palestine demonstrators calling for a boycott during a protest in Paris
(photo credit: AFP PHOTO)
Advertisement
Arab League chief Nabil Elaraby called on Palestinians to "think out of the box" and engage in civil disobedience against Israel in order to put an end the "Israeli occupation," Egyptian media reported on Tuesday.Speaking at a meeting of the Yasser Arafat Foundation at the headquarters of the Arab League on Tuesday, Elaraby claimed that "Israel is trying to break the will of the Palestinian people" amid the great challenges the Arab world is facing.In addition, Elaraby said that "we must not forget that the indiscriminate killing of civilians the world is witnessing today started in the Middle East with the terror exerted by the Jewish clandestine organization which blew up the King David Hotel in Jerusalem in 1946, indiscriminately killing about 90 people." Relating to the deadlock in peace talks between Israelis and Palestinians, Elaraby emphasized the importance of supporting the BDS movement, claiming that it might put an end to Israeli settlement activities. He also said: "We must think out of the box and consider the option of civil disobedience, used by Gandhi to put an end to the British colonialism in India.”Although sounding these anti-Israeli statements, Elaraby was accused of collaborating with Israel after declaring on Monday that the Russian aerial campaign does not violate international law since it is based on a request from the Syrian government. This statement aroused furious reactions among many political analysts. One analyst claimed that with his support for the Russian bombings, Elaraby transforms the Arab League into the "Israeli League." Another well-known Lebanese analyst who opposes Hezbollah, Anwar Malik, said that Elaraby’s statement does not amaze him and that he considers it possible that the latter will “one day blame the Syrian people for violating international law by running away from Russian bombing."