Dennis Ross pans Kerry's 'all or nothing' approach to Israel, Palestinians

Former US envoy to the Middle East questions the timing of the outgoing secretary of state's speech while lauding his "passion." 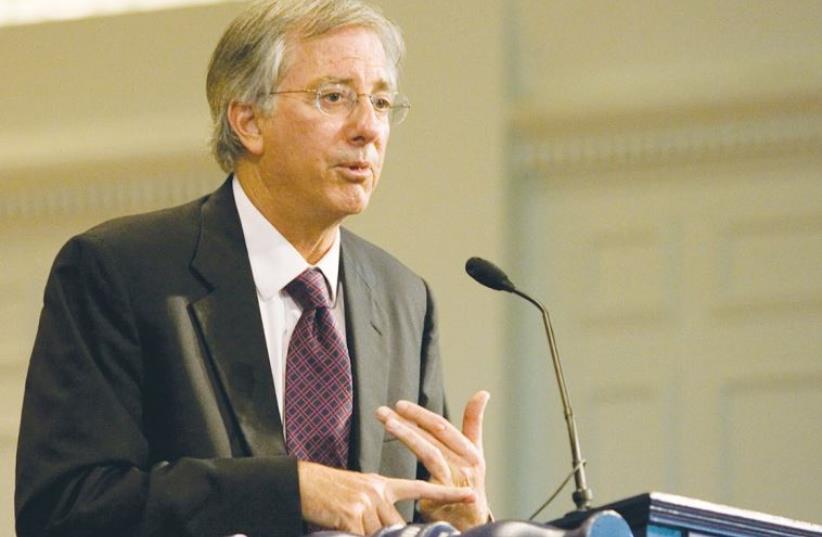 Former US peace negotiator Dennis Ross
(photo credit: Wikimedia Commons)
Advertisement
Former Obama administration envoy to the Middle East, Dennis Ross, characterized outgoing US Secretary of State John Kerry's speech on the Israeli-Palestinian conflict Wednesday as something America's top diplomat "had to get off of his chest."In a parting shot weeks before he is due to leave office, Kerry focused much of his speech on Israel's settlement activity, which he characterized as creating an "irreversible one-state reality.""Part of the problem with the Kerry approach is that it's an all or nothing approach - and the problem with an all or nothing approach is that is always produces nothing," Ross told Army Radio on Thursday.
John Kerry lays out Mideast peace vision
Ross, who himself had engaged much effort in the peace process, maintained that the prospect of Israeli-Palestinian peace was at "the lowest ebb since I've been working on this in the terms of the level of disbelief on both sides." Kerry should have attempted to restore an air of opportunism instead of indicating that it is now "inevitable" that the sides will not reach a two-state solution, Ross stated. Speaking to the radio station, Ross also noted that the timing of Kerry's speech was "a little bit puzzling." The veteran American diplomat added that Kerry likely made the remarks now as opposed to three years ago during the last round of Israeli-Palestinian peace negotiations because he "though he would have some opportunity to do something else in the interim."According to Ross, Kerry didn't issue the comments sooner because he was worried that the sides would reject the principles he layed out "and once they rejected them it wouldn't leave him a lot of space to operate." Ross noted that he was struck by Kerry's "passion," but he also criticized the emphasis on the matter and the "paradox of what is happening in the region." "This is what he gives a 75-minute speech on - not what's happening in Syria, not what's happening in Iraq not what the Russians are doing," he underlined. While Kerry's speech was billed by US officials as a comprehensive vision for peace between Israel and the Palestinians, Prime Minister Benjamin Netanyahu issued a swift response accusing Kerry of bias. Netanyahu said that Israel did not need to be lectured to by foreign leaders and looked forward to working with President-elect Donald Trump, who has vowed to pursue more pro-Israeli policies.While Kerry's remarks Wednesday marked the closing chapter of a contentious relationship between the Israeli government and the Obama administration, Ross expressed his understanding for both sides. Turning to Israel's rebuff of Kerry's long-winded criticism of settlements, Ross said Netanyahu had made a "fair point" in his reaction. Along with seeing the legitimacy of Netanyahu's position, Ross asserted that Kerry had been right in saying a one-state outcome was the path if the status quo remains in place. Turning to US President-elect Donald Trump, Ross asserted that it was "premature" to try to predict the incoming administration's actions regarding the Israeli-Palestinian conflict.

Michael Wilner and Reuters contributed to this report.