Mashaal: We are in open war with Israel 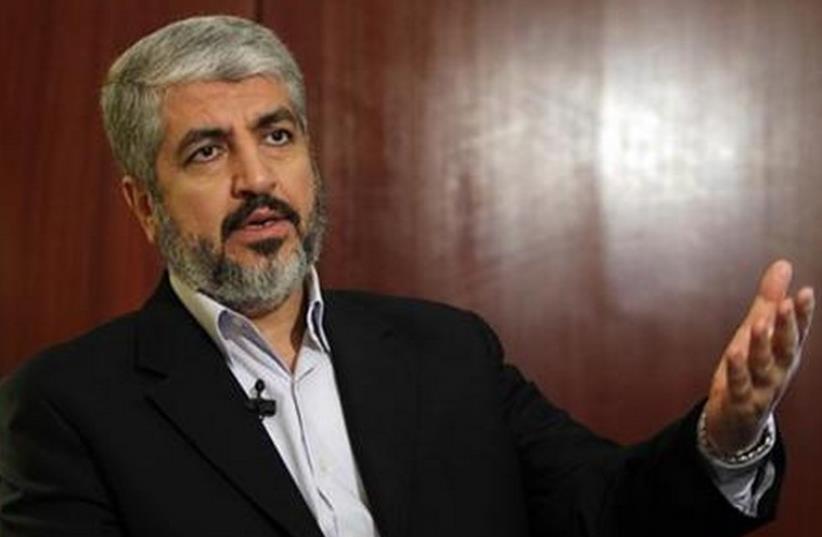 Hamas political bureau chief Khaled Mashaal.
(photo credit: REUTERS)
Advertisement
Hamas Politburo Chief Khaled Mashaal, in his first response to the mysterious assassination of Mazen Fuqaha, said Hamas is in an “open war” with Israel.
Hundreds participate in symbolic funeral for senior Hamas militant Fuqaha (credit: REUTERS)
“We were and we still are in an open war with the criminal enemy,” Mashaal declared Monday, speaking via video broadcast to a memorial service in Gaza for Fuqaha, who was assassinated in front of his home on Friday night.Hamas has squarely blamed Israel, saying the assassination bears the hallmarks of the Israel Security Agency (Shin Bet). Israeli officials have not commented on the incident.Mashaal, who is slated to step down as Hamas chief later this year, said the terrorist organization is deeply committed to continuing armed confrontation with Israel. “The movement participates in politics and diplomacy and all types of work, but it insists on the choice of jihad and resistance,” Mashaal stated. “[This choice] is Hamas’s greater and first strategy… This is Hamas. Hamas is not changing its skin.”Since its founding in the late 1980s, Hamas has consistently backed armed confrontation with Israel and supported a number of violent attacks against it.Mashaal added that he is confident that, ultimately, Hamas will defeat Israel.“We don’t care if there is an imbalance of power. Our will is stronger than their force,” Mashaal remarked. “We kill them and they kill us, [but] we will defeat them in the end.”Fuqaha’s assassination has raised the specter of another violent escalation between Hamas and Israel, with members of the Israeli defense establishment expressing concerns about the possibility of a violent, Hamas-orchestrated attack in the West Bank.