The bombing, which took place on July 31, 2002, was planned and perpetrated by members of an eastern Jerusalem Hamas cell during the Second Intifada. 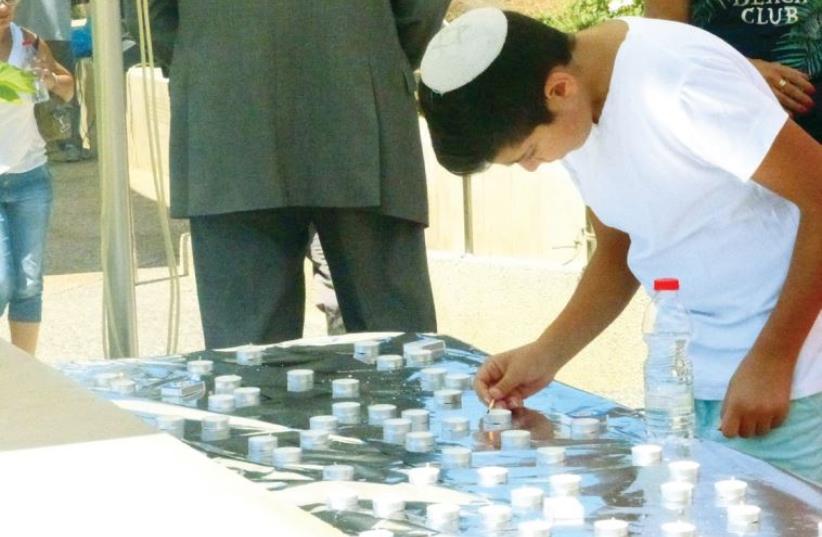 Memorial ceremony to mark 13 years since the terrorist attack at the Hebrew University.
(photo credit: Courtesy)
Advertisement
Last week marked the 17th anniversary of the Hebrew University of Jerusalem cafeteria bombing, in which nine people were killed and more than 80 wounded. In honor of the anniversary, Palestinian Media Watch (PMW) released a report showing that the terrorists responsible for the attack have thus far received $1,257,259 in “pay-for-slay” payments from the Palestinian Authority.
The bombing, which took place on July 31, 2002, and became known as the Hebrew University massacre, was planned and perpetrated by members of an eastern Jerusalem Hamas cell during the Second Intifada. A bomb was placed in a cafeteria on the Mount Scopus campus. Among those murdered were five Americans.
Six members of the Hamas cell are serving multiple life sentences in Israeli prisons for this attack and others.
Among the convicted terrorists for this and other attacks are Adballah Barghouti – one of the main Palestinian commanders in Hamas's armed wing the Izzadin al-Qassam Brigades, who is serving 67 life sentences plus 5,200 years for his involvement in killing 66 Israelis and injuring some 500 – and Ibrahim Hamed, who is serving 54 life sentences for killing 46 and being an accessory or attempting to kill eight more. As of June, the PA has cumulatively paid them NIS 1,271,000 ($364,000) and continues to pay them thousands of shekels per month, according to PMW.
The other four terrorists – Wael Qassem, Wassim Abbasi, Alla Aldin Abbasi and Muhammed Odeh – were residents of Jerusalem, entitling them to a salary supplement of 300 shekels/month. Each of them has been paid more than NIS 770,000 ($221,000) since their arrest in August 2002, and is currently receiving NIS 7,300 ($2,091) per month.
According to the media watchdog, these terrorists have received NIS 300,000 or $86,000 since the beginning of the year, despite the PA's purported financial crisis.
The PA obligated itself to pay monthly salaries to imprisoned terrorists when it passed the Law of Prisoners and Released Prisoners in 2004, PMW explained. The exact amount paid is set in regulations passed by the PA government.
THIS IS NOT the first time PMW has reported on the payments of terrorists involved in particularly sensitive cases. Last month, five years after the July 11, 2014, arrest of Husam Al-Qawasmi – the terrorist mastermind behind the 2014 kidnapping and murder of Gilad Shaar, Eyal Yifrach and Naftali Frenkel – PMW reported that he began receiving a salary of NIS 4,000/month, double the NIS 2,000/month according to the PA’s standard pay scale.
The PA has long had a “Pay-for-Slay” policy, by which it pays monthly salaries to terrorist prisoners and the families of terrorists who were killed in the act or upon arrest.
In February, Israel responded by implementing the “Pay-for-Slay” Law, which instructs the state to deduct and freeze the amount of money the PA pays in salaries to imprisoned terrorists and families of “martyrs” from the tax money it collects for the authority. The law was passed in July of last year and was approved for implementation by Israel’s security cabinet this year.
In 2019, the cabinet is so far withholding approximately $138 million.
The following is a list of people murdered in the 2002 Hebrew University massacre, taken from the university’s website:
Benjamin Blutstein – Age 25, from Harrisburg, Pennsylvania. Ben was a student in the two-year graduate students’ program in Jewish Education at the Rothberg International School and at the Pardes Institute. Ben was a colorful and special person, a religious young man who by day studied Judaism, Gemara and Chumash, and by night worked as a disc jockey.

Marla Bennett – Age 24, from San Diego, California. Marla was a graduate of the University of California at Berkeley and also a student in the two-year graduate students’ program in Jewish Education at the Rothberg International School and at the Pardes Institute. Marla was aware of the dangers inherent in living in Israel, but she also knew that there was no other place in the world where she would rather be.

Revital Barashi – Age 30. Revital was the youngest of a Jerusalem family's 13 children. She worked in the secretariat of the Faculty of Law, and was involved, among other things, in assisting the academic and administrative staff and in guiding new employees. Revital, the Faculty’s ray of light, was outstanding in all her deeds; diligent, talented, pleasant and always with a captivating smile.

David Gritz – Age 24, from Paris. David had completed his undergraduate studies and his first year of graduate studies in Philosophy at the University of Paris, where he was an outstanding student. He had registered for the Rothberg International School’s summer ulpan, which he was never able to begin. David was a brilliant student, a true intellectual, with a special and intense interest in Jewish studies.
David Diego Ladowski – Born in Argentina in 1973, David immigrated to Israel in 1992. He was about to finish his master’s degree in Public Policy at the Hebrew University and was due to start his first diplomatic job at the Israeli Embassy in Lima, Peru.

Janis Ruth Coulter – Age 36, from Boston, Massachusetts. Janice had a master’s degree in Jewish Studies from the University of Denver. She was the senior program coordinator at the Rothberg International School’s New York office. Janice was a wonderful woman, smart and dedicated, with a great sense of humor.
Dina Carter – Age 38, Dina, from North Carolina. Dina immigrated to Israel in 1990. She worked as a librarian and archivist in the Publications and Archives Department of the  University’s Jewish National and University Library. Dina was a unique woman with a captivating personality; an intelligent and talented artist who painted and sculpted.
Levina Shapira – Age 53, Levina was born in Jerusalem. She had worked at the Hebrew University for 30 years, working her way up to the senior position of Director of the Student Administration Authority. She was blessed with wisdom, talent, dedication, pleasant ways, excellent human relations and unceasing curiosity.
Daphna Spruch – Born in Tel Aviv, Daphna had worked as a systems coordinator in the Student Administration Authority for close to 30 years and was one of its most senior and experienced employees. She was a smart woman, intellectual and widely educated. She had been studying for her master’s degree in Comparative Religion.