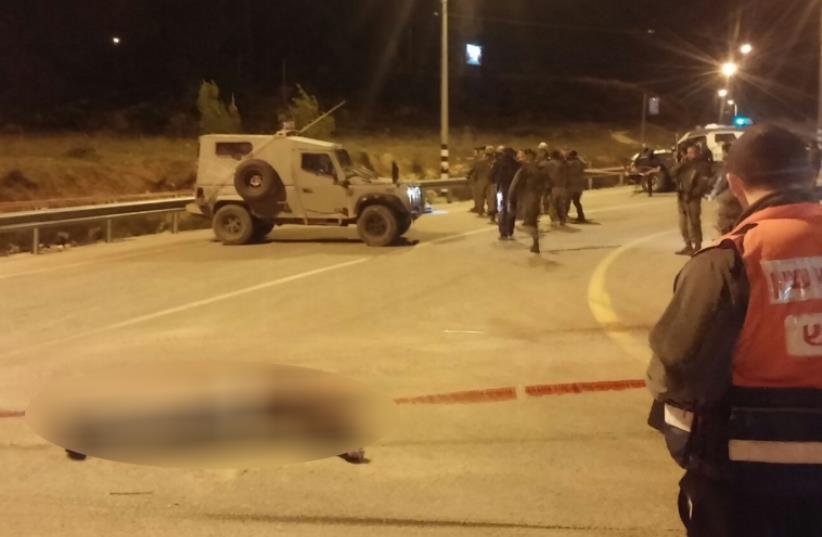 Three terrorist stopped at Gush Etzion Junction- Jan 7, 2016
(photo credit: GUSH ETZION REGIONAL COUNCIL)
Advertisement
Security forces shot and killed a Palestinian assailant attempting to stab IDF forces at the Beit Anoun junction near Hebron on Thursday night, the military said.No Israelis were wounded in the second attempted attack against Israeli troops in the West Bank on Thursday.Earlier Thursday evening, security forces shot and killed three Palestinian assailants attempting to stab Israeli forces at the Gush Etzion junction in the West Bank. IDF reservists guarding the Gush Etzion junction killed three male Palestinian assailants who attempted to stab them.According to the IDF all three of the Palestinians were armed with knives. There were no injuries on the Israeli side. The soldiers were guarding the area, which has seen numerous past
security incidents in recent months. According to The Jerusalem Post’s sister paper Ma’ariv, the three Palestinians were from the Kawazba family. It claimed that Thursday’s incident was a revenge attack for the Tuesday’s killing of their relative Ahmed Yusef Kawazba, 18. On Tuesday a Ahmed Yusef Kawazba, 18, stabbed and lighted wounded an IDF reservist at a bus stop at the Gush Etzion junction. A nearby IDF soldier shot and killed the 18-year-old who was from the town of Sair north east of Hebron.Separately, on Thursday afternoon the IDF arrested a Palestinian man with a knife near the Jewish building of Beit Hadassah. Yaakov Lapping contributed to this report.