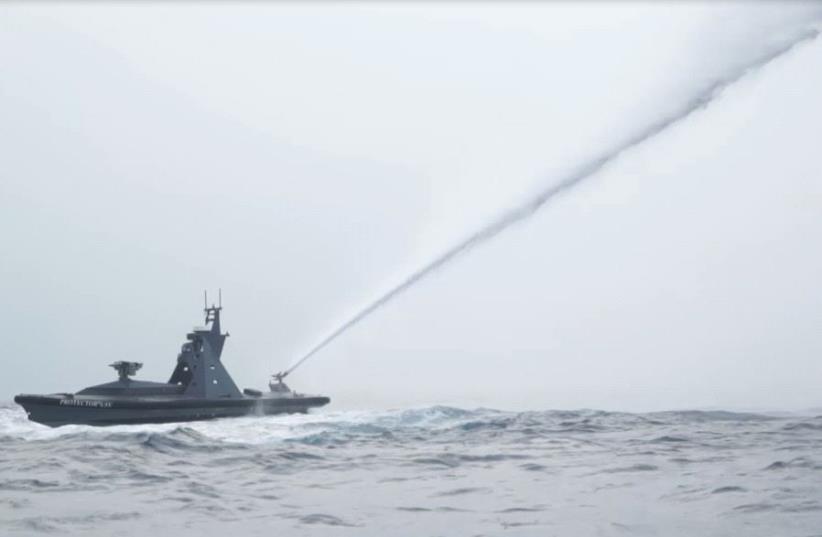 Israeli Navy's Protector "unmanned surface vehicle" ship
(photo credit: IDF SPOKESPERSON'S UNIT)
Advertisement
Lebanon’s Defense Minister Elias Bou Saab has warned that the Lebanese military would strike Israel’s Ben-Gurion Airport if Beirut’s Rafik Hariri International Airport were struck in a future conflict.“If ‘Israel’ bombards our airport, we will bombard its airport; if it strikes our oil facilities, we will strike its oil facilities,” he was quoted as saying by Hezbollah’s al-Manar news site.Saab made the comments while touring south Lebanon. During his tour, he met with Lebanon’s Army Chief Gen. Joseph Aoun in Tyre, who briefed him on the situation in the southern region, especially in villages bordering Israel Saab and Aoun later visited UNIFIL headquarters in Naqoura, where they were received by its general commander Maj.-Gen. Stefano Del Col.Disagreement over Israel’s ongoing construction of the border wall and Lebanon’s plans to explore for offshore oil and gas in disputed maritime waters have elevated tensions between the two countries, which officially remain at war.Israel and Hezbollah fought a deadly 33-day war in 2006, which came to an end under UN Security Council Resolution 1701, which called for disarmament of Hezbollah; withdrawal of the Israeli army from Lebanon; deployment of the Lebanese army; and an enlarged UN force in southern Lebanon.But Hezbollah’s influence in Lebanon has led senior officials in Israel’s defense establishment to warn that Lebanon’s army has lost its independence and has become an integral part of Hezbollah’s network.The IDF says that cooperation between the LAF and Hezbollah has increased in the past year, and has warned that the next war will see Israel target not only military infrastructure but civilian infrastructure used by Hezbollah.On Tuesday, Lebanon’s Speaker of the House Nabih Berri said that his country is prepared to demarcate its maritime border with Israel under the supervision of the United Nations, with the same mechanism used for the Blue Line.“We are ready to draw Lebanon’s maritime borders and those of the Exclusive Economic Zone [EEZ] using the same procedure that was used to draw the Blue Line under the supervision of the United Nations,” Berri was quoted by Lebanon’s National News Agency as saying.The UN-demarcated Blue Line currently separates Lebanon and Israel’s territory along more than 200 points. Thirteen of the points are disputed by the Lebanese government.According to the report, Del Col told Berri that the mechanism used to draw the Blue Line could also be used to resolve the maritime border issue and enhance stability.The two countries have an unresolved maritime border dispute over a triangular area of sea comprising around 860 sq.km., which extends along several blocks of exploratory offshore drilling that Lebanon put up for tender two years ago.Beirut claims that Blocks 8 and 9 in the disputed maritime waters are in Lebanon’s EEZ and parts of Block 9 run through waters that Israel claims as its own EEZ.Recently discovered oil and gas reserves off the shores of Lebanon and Israel are predicted to generate up to $600 billion over the next few decades. In December 2017, Beirut signed contracts with three international companies to explore oil and gas in two of the blocks.Lebanon and Russia signed a memorandum of understanding to cooperate on oil and gas in October 2013.Israel also views its offshore oil and gas reserves as highly valuable, both economically and strategically. Jerusalem has made agreements with Cairo to sell it surplus gas, and agreed earlier this year to partake in an Eastern Mediterranean Gas Forum, which includes seven members: Egypt, Israel, Greece, Cyprus, Jordan, Italy and the Palestinian Authority.In November, Israel reportedly signed an ambitious project to build a 2,000 km. underwater gas pipeline – from Israel to Cyprus, Crete, mainland Greece and Italy – to supply natural gas. The construction of the pipeline is expected to take five years and cost some $8b.
Due to the pipeline, Greece and Cyprus were reported by al-Hayat to have offered their help in mediating the demarcation of the maritime border with Lebanon.
Advertisement
Subscribe for our daily newsletter