MK Dov Henin: "The choice is either peace or war. Without peace, we will be dragged into a new and dangerous war that will hurt all of us." 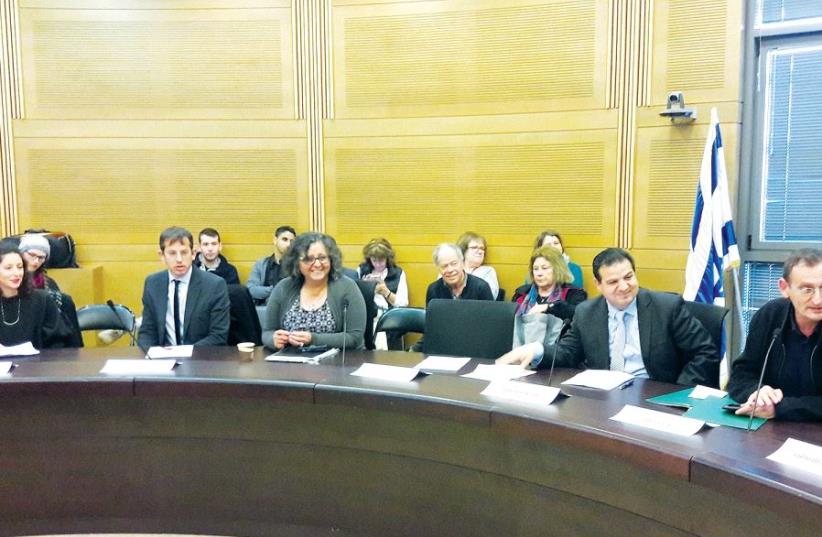 Attending the conference at the Knesset yesterday are, from second left, B’Tselem head Hagai El-Ad and MKs Aida Touma-Sliman, Ayman Odeh and Dov Henin
(photo credit: YONAH JEREMY BOB)
Advertisement
A block of left-wing MKs and NGOs held a conference in the Knesset on Wednesday marking “50 years of occupation,” with the message that Israel must choose between peace with the Palestinians, and the road to apartheid or war.Joint List chairman Ayman Odeh opened the conference saying, “There are two ways forward: peace or apartheid – there is no other path. A Palestinian state next to an Israeli state, upholding UN Resolution 242... Peace is the truth and the way forward for the two nations.”We are meeting here today, only a moment before Prime Minister Benjamin Netanyahu and US President Donald Trump hold their “no hope summit,” where there is only war and incitement, Odeh said. “We meet today to say that between the Jordan River and the Mediterranean Sea there is a majority of Israelis and Palestinians who want peace,” he continued.The Joint List leader continued that even as “the Palestinians who live in the West Bank are leading the efforts to end the occupation, we in Israel are trying to convince Israelis that it is also in their interest” to make peace.He concluded that recent verbal attacks on Israeli Arabs and the Supreme Court have come “because a nation that occupies another cannot stay a democracy.”MK Dov Henin (Joint List) said he felt compelled to change Odeh’s formulation of the options Israel faces. “The choice is either peace or war. Without peace, we will be dragged into a new and dangerous war that will hurt all of us – Palestinians, Israelis and all of the Middle East,” Henin said.He accused Netanyahu and Trump of being “stubborn.... closing their eyes and ears to the military rule over a people that does not want this rule – closing their ears to the suffering... We want to hear the voices of suffering and to be heard [ourselves].”Hagai El-Ad, head of B’Tselem – The Israeli Information Center for Human Rights in the Occupied Territories, focused on the recently passed Settlements Regulation Law, saying, “I want to praise the Knesset... which after almost 50 years is finally starting to tell the Israeli public the truth... with the ‘expropriation law’” – referencing the view that the legislation is an illegal Israeli land grab of private Palestinian land.El-Ad continued to say that in many ways the Settlements Regulation Law is nothing new, arguing that Israel had been stealing Palestinian land for decades.However, he said that until now Israel had sugarcoated land grabs, acting as if it respected Palestinian rights in accordance with certain principles and that the occupation was temporary, but that the new law “told the truth regarding [Israel’s] longterm intention to continue [the occupation] and rule over” the Palestinians.The Association for Civil Rights in Israel, Yesh Din: Volunteers for Human Rights and other organizations expressed similar sentiments, criticizing the Settlements Regulation Bill.MK Michal Rozin (Meretz) told the attendees that they must continue to meet, “to return the occupation discussion to the center of discussion... People are trying to obscure the fact that there have been 50 years of occupation. This is an anomaly... we have reached the point where we must deal with it.”MK Ahmad Tibi (Joint List) said that if there is no two-state solution, the only solution is a binational state on the principle of one person, one vote... So the prime minister’s name could be Tibi instead of Bibi.”EU Ambassador Lars Faaborg-Andersen addressed the conference, stating, “The EU view is quite clear: We are in favor of a two-state solution. We have sketched out what it looks like. We have put on the table a series of practical steps to approach the two-state solution and to reverse negative trends on the ground both on the Israeli and the Palestinian side.”Faaborg-Andersen said that eventually Palestinians and Israelis would need to decide on the parameters of peace, and that in the meantime it was important “to have public debate... on the issue of occupation.”Diplomats from a wide range of countries attended the event, including from Germany, Britain, Austria, the Netherlands, Spain and Brazil, as well as from the UN.Muhammad al-Madani, the head of the Palestinian Authority’s Committee for the Israeli Public, addressed the conference via video, and expressed strong support for the two-state solution.