The MKs' fear comes amidst a White House official referring to the possibility of replacing the two-state solution with "something else." 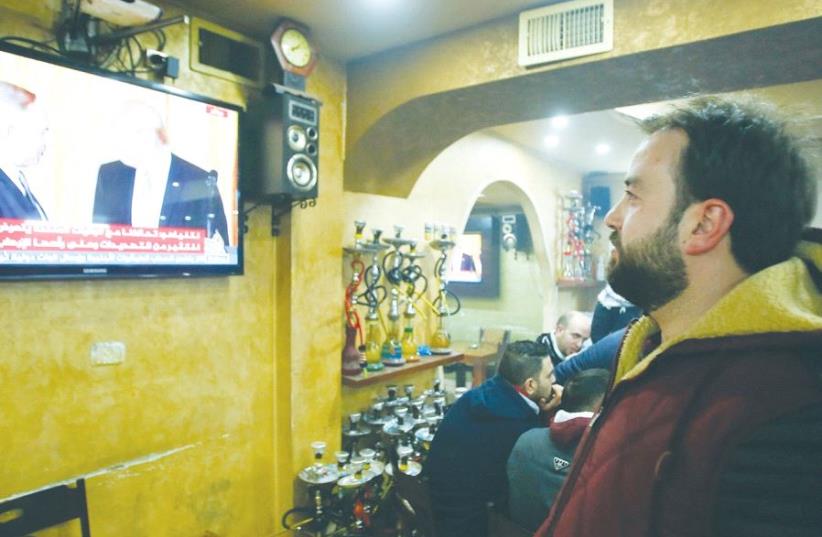 A Palestinian man in a cafe in Hebron watches Prime Minister Benjamin Netanyahu and US President Donald Trump’s joint press conference
(photo credit: MUSSA QAWASMA / REUTERS)
Advertisement
Statements by a White House official to the effect that Israeli-Palestinian peace does not have to entail Palestinian statehood touched off consternation on Wednesday among Israeli-Arab politicians, even though it was not immediately clear if the remarks would be personally embraced by President Donald Trump.The official said in advance of a meeting at the White House between Trump and Prime Minister Benjamin Netanyahu that it was up to Israelis and Palestinians to decide on the shape of a peace deal, whether this would be through a two-state solution, “or something else.”If the remarks become the official stance of Washington that would mark a break with longstanding US policy viewing a two-state solution as the only viable path to peace.MK Zuheir Bahloul (Zionist Union) said such a shift “could be cause to cry for generations, because two states for two peoples is the plan that is the most operative on the ground. Any other decision can be fraught with disaster. Two states for two peoples is a practicable solution, and if we don’t work on something that is defined, we will continue to tread water until the end of our lives and we will have only victims. It is a shame for every soul that will be lost. It is too bad that they have now clouded this matter.“Two states for two peoples is the solution acceptable to the Palestinians and the Israelis, even Netanyahu in his [2009] Bar-Ilan speech accepted it,” Bahloul continued. “One state for two peoples means an apartheid state, rule of the minority over the majority. This will create a very, very strange Middle East. While all the world is fleeing from apartheid and South Africa abandoned it, here in Israel we would have minority rule.”Bahloul said he doubts it would be possible to have one state with equal rights for all.“It won’t happen,” he said. “This country defines itself as Jewish and democratic, and it won’t relinquish its Jewish definition. This means that one state for two peoples will be subordinate to the Jewishness of the state and not necessarily to the democracy of the state. There is great doubt whether there would be equality of rights because even today there is no equality between Arabs and Jews.”MK Yousef Jabareen (Joint List) said that if the Trump administration does back off from the two-state solution, it will be going against an international consensus, including Arab and Muslim countries and the Palestinian leadership.“The support of the US is definitely crucial and any change in policy would be a slap in the face of the international community,” he said.“I think the two-state solution is still the most feasible solution. However, because of increased settlement building we have started the countdown for [the end of] this solution. Unfortunately, the actual alternative on the ground doesn’t seem to be one democratic state or a binational state, but a Jewish, Zionist state controlling all of Mandatory Palestine and leaving Palestinians with some kind of self-rule that would look like Bantustans,” he said.Jabareen said he hopes other countries will exert influence on Washington so that it does not abandon the two-state solution. “There is a need to emphasize that resolving the conflict is not just a Palestinian interest, but is an international interest, and that there can be no peace without addressing the rights of the Palestinian people. I hope other players in the international arena like the European Union will make it clear to the US that it needs to stick to international standards.”MK Masud Gnaim (Joint List) said that if the position enunciated by the White House official turns out to be the official stance of the Trump administration, “this would be very dangerous, because they are taking the right-wing Israeli side that does not want a two-state solution, that wants to impose the existing situation of occupation. This will cause the Palestinians to not view the Americans as objective and able to lead negotiations or any future peace plan, and will cause the Palestinians to withdraw from any peace negotiations, because all negotiations in the past and the present are built on the principle of two states, an end to occupation, and establishing an independent Palestinian state.”In the view of Awad Abdel Fattah, former president of the Balad Party, which is part of the Joint List, Israeli settlement construction has already killed the two-state solution.“I think that by killing the two-state solution, the Israeli government never thought of a one-state solution, it thought of controlling all of Palestine without giving equality to Palestinians. I think Palestinians and Israelis should think of their strategies and push toward a one-state solution based on equality and justice,” he said.“The one-state solution gives a human vision for all, a moral vision. When you stop pushing for separation or partition, it is better than separating the two peoples. The two-state solution has no advantages and it is impossible now. The advantage of the one-state solution is that people make a shift in their thinking. Instead of thinking they are enemies they will think they can live together. They should think that Palestinians and Israelis can live together. This would stop wars and bloodshed, and people can be educated about democracy and about living together.”Abdel Fattah said he believes, however, that the Trump administration and Netanyahu are now headed toward interim solutions, such as improving the economic situation of Palestinians or giving them greater autonomy.“Unfortunately they are still thinking that it is still possible to tame the Palestinians by giving them economic benefits,” he said. “This won’t happen. It will only push the Palestinians to more resistance if they come with provisional solutions.”