In Israel, seeing a female combat soldier is not all that unusual, women are eligible for 92% of the IDF's jobs. 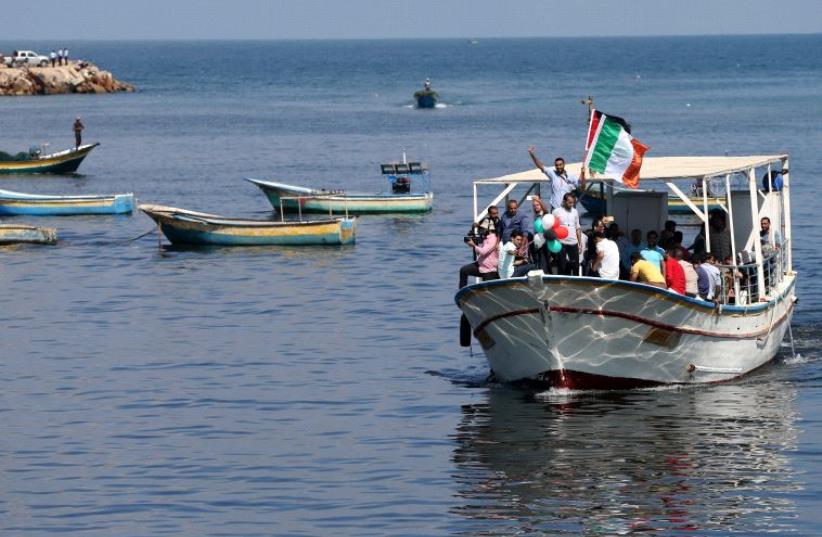 Palestinians ride a boat as they take part in a rally to show solidarity with Gaza-bound flotilla October 5, 2016.
(photo credit: REUTERS)
Advertisement
As the passengers aboard the all-female flotilla ship the Zaytouna-Oliva neared Israel's maritime blockade of the Gaza Strip on Wednesday, they were met by Israeli Navy soldiers ready to escort them to Ashdod, however not just any Navy soldiers. The Navy sent both female and male navy combat soldiers to escort the boat to Ashdod, according to an IDF spokesperson. In Israel, seeing a female combat soldier is not all that unusual - women are eligible for 92% of the IDF's jobs. According to the IDF, in 2014 roughly 40% of the army was made up of women, including 4% serving in combat roles. According to Yehudit Ilani, spokeswoman for MK Haneen Zoabi, who was originally on the flotilla boat, in the past the navy has also brought female soldiers. Ilani got off the boat in Italy, for what she described as logistical reasons.Ilani claimed that female soldiers don't necessarily mean "better service."She also said that when the IDF brought the female combat soldiers in the past, the treatment was often more serious. Not much is known what has happened to the women aboard the flotilla since the IDF escorted them to the post of Ashdod. The IDF stated that they took over the boat once it was clear that the women would not willingly sail to Ashdod and  the process was quick with no casualties. Much to the international media's dismay the IDF has not released any footage of Wednesday's takeover.The Navy also reportedly cut off the boat's communication before the take over, preventing the on board Al Jazeera corespondent from broadcasting live.  Twitter reports on Wednesday confirmed that the Women's Boat to Gaza had lost communication with the boat in the afternoon hours. Once the boat was captured, the Women's Boat to Gaza website and Twitter feed released what they called "SOS videos," clips filmed ahead of time, featuring flotilla crew members asking residents of their home countries to request officials to aid in their release. The Twitter feed, "GazaFFlotilla," stated Thursday morning that they do not know what has happened to the flotilla's passengers and that lawyers have not been allowed to see them. Israeli reports stated that the 13  female activists were being held at the port of Ashdod , going through questioning with the police and will be soon deported.In June 2015 the Israel Navy intercepted the Swedish fishing boat Marianne av Göteborg into Ashdod Port some 85 nautical miles off the Gaza Strip Coast. Among the Marianna’s passengers were MK Basel Ghattas (Joint Arab List) and former Tunisian president Moncef Marzouki.In 2010 Israel commandos killed 10 Turkish activists after they raided the Gaza-bound Mavi Marmara flotilla and conflict ensued. The incident lead to years of tense relations between Israel and Turkey, which were reconciled at the diplomatic level with a reconciliation agreement between the two countries in June of this year.Yossi Melman, Lahav Harkov and Yaakov Lappin contributed to this report