Gil Hoffman is the chief political correspondent and analyst for The Jerusalem Post.

Well-connected to Israeli and Palestinian leaders, he has interviewed every major figure across the Israeli political spectrum, has been interviewed by top media on six continents and is a regular analyst on CNN, Al-Jazeera and other news outlets. Called "The most optimistic man in Israel" by Israel Television, Hoffman provides a behind the scenes look at the intrigue and humor in the Israeli political arena.

Gantz vows to beat Netanyahu if there are elections

Without Liberman, unity is easier - analysis

Israeli elections to be held on February 25 at the earliest

Why shortening the agony of a third election is no reprieve? - analysis 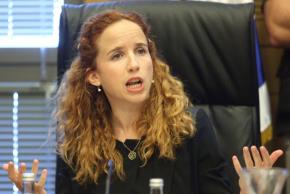 Stav Shaffir pushing to unite Left ahead of possible election

Gantz: We won't get to form the government of our dreams

The role Gabbay and Olmert are playing in elections