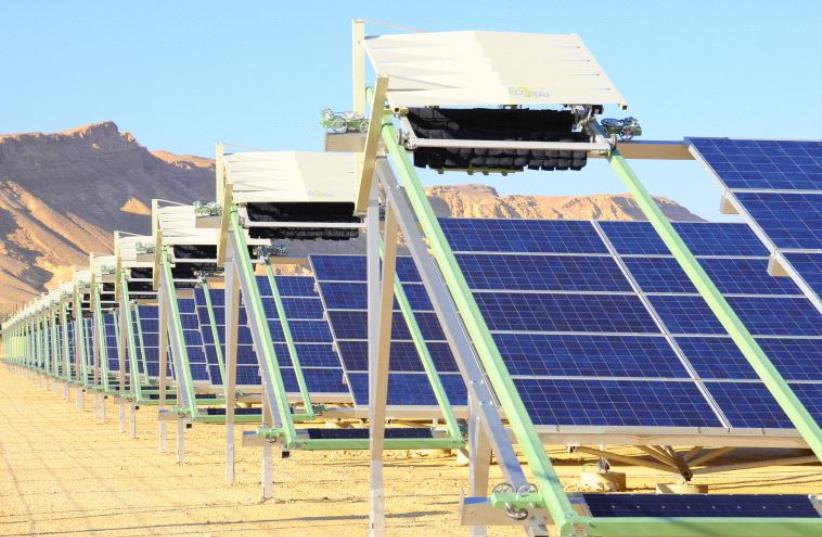 Robots docking at base.
(photo credit: ECOPPIA)
Advertisement
Israeli robotic technology will clean the photovoltaic panels at a gigantic solar park in northwestern Indian, following an agreement signed last week.Herzliya-based Eccopia, the world leader in water-free, automated solar panel cleaning, will deploy its system at the 10,000-hectare, 2,255-megawatt Bhadla Solar Park, located some 200 km. outside Jodhpur, the second largest city in the state of Rajasthan. The deal was signed with Solairedirect India, a subsidiary of the French multinational ENGIE Group.Due to the desert conditions at the park – which is still under construction – the solar panels are prone to frequent dust storms that can reduce energy generation by as much as 40% in a matter of minutes, according to Eccopia. The company explained that traditional labor-intensive, water-based cleaning solutions are neither cost-effective nor efficient enough to immediately recover from sandstorms.Eccopia’s robotic solution, which automatically removes dust without water, will operate nightly at Bhadla, restoring panels from the impacts of storms in a matter of hours, a statement from the firm said. The deployment of the Eccopia system is expected to save ENGIE more than 1.5 billion liters of water and significant operational expenses.“We expect to harness Ecoppia’s revolutionary cleaning system to dramatically raise output and lower costs,” said Gaurav Sood, managing director of Solairedirect India. “This type of technological breakthrough not only benefits our own business interests, but the solar energy sector as a whole. We are proud to be one of the world’s first solar energy providers to adopt Ecoppia’s cutting-edge, autonomous robotic panel cleaning paradigm.” Ecoppia’s technology is either already cleaning solar panels or slated to do so at several other projects in both Israel and India.In Israel, the system is working at the Arava Power Company and at the Électricité de France Energies Nouvelles Israel 40-megawatt Ketura Sun project, as well as Arava Power’s Grofit Sun, and is currently under deployment at Shikun & Binui’s Nevatim solar farm. In India, the technology is operating at the SunEdison and TerraForm Charanka Park and Adani Power’s Kamuthi Solar, and is under deployment at NTPC’s Dadri Solar.Ecoppia’s agreement with Solairedirect India and ENGIE follows the company’s recent decision to shift its assembly facilities to India, and open a new Asia headquarters in Gurgaon, a city just southwest of New Delhi.“We’re proud to cooperate with forward-thinking companies like ENGIE in what is truly a true revolution in renewable energy,” said Eran Meller, CEO of Ecoppia. “By ensuring cost-effective panel cleanliness on a day-to-day basis, we’ve created a new standard of plant output that is changing the way operators, investors and governments view the benefits of solar power.”