A candidate of mixed, yet strong, faiths: Marco Rubio enters the race for the White House

Rubio has bounced from Catholicism, to Mormonism, to Southern baptism and back to Catholicism again. 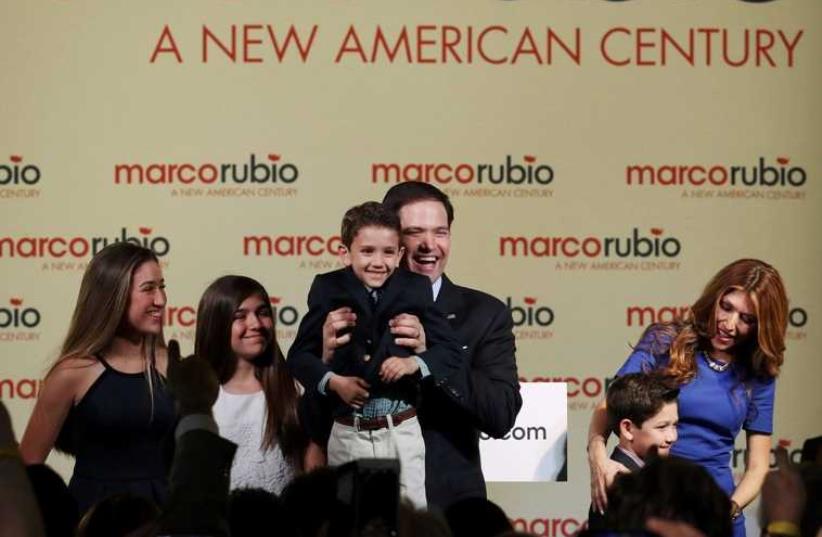 U.S. Senator Marco Rubio (R-FL) holds up his son Anthony as he stands with family members, including his wife Jeanette (R), after he announced his bid for the Republican nomination in the 2016 U.S. presidential election race during a speech at Freedom Tower in Miami, Florida
(photo credit: REUTERS)
Advertisement
Marco Rubio, a junior Republican Senator from  Florida, became the fourth person to enter the 2016 race, and the second candidate to make a faith-based run at the Oval Office.  But the question still remains, what kind of Christian is he?At age 43, he’s bounced between Roman Catholicism, Mormonism, Southern Baptism and now back to Catholicism. Though a man of mixed denominations, his Christian faith continually influences his politics both domestically and in foreign policy. “'I’ve never criticized anyone for having their faith influence their public-policy decisions,” Rubio said during an interview prior to the 2012 election. “If your faith is real, burning inside of you, it's going to influence the way you view everything. That belief influences your job and the responsibilities you have.”The son of two Cuban immigrants,  Rubio was born in the Catholic church, then when his family moved to Nevada when he was eight years old they converted to Mormonism, and was there baptized in the Mormon church at the age of eight. Many of the Rubio’s relatives in the area were a part of the Mormon Church of Latter Day Saints (LDS), and his mother wanted the children to become apart of the wholesome, family-friendly environment that came along with Mormonism.But, Rubio left the Mormon church just four years later when his family moved back to Miami. He has said that it was one of two occasions in his life when he felt “called back” to Catholicism."For spiritual reasons, when I was about 12 years old, I started feeling called back to the Catholic Church and it was nothing against the Mormon Church, it was just a calling, that's happened twice in my life," Rubio said.Today, his family belongs to Christ United, a Southern Baptist mega-church with branches throughout southern Florida The church is known for its showy performance worship and excellent children’s programs. According to Rubio’s campaign website, he contributed almost $50,000 to the church  between 2005 and 2008.Although Rubio exclusively attended the Baptist church between 2000 and 2004, today he only attends the Mega Church every Saturday night with his family, according to his memoir “An American Son.. A self identifying Catholic, he prefers to go to Catholic church on Sunday mornings, now. Although the family attends a Baptist church, each of the four Rubio children have received first Holy Communion from the Catholic Church.Although Rubio appears to be all over the map when it comes to religion in his personal life, he has remained committed to intertwining his religious values with his political decisions. Most recently, Rubio took a faith-based stance regarding the highly politicized Indiana Religious Freedom Reformation Act, which allows people when sued for discrimination, to argue that the allegedly discriminatory behavior was an expression of their faith. Critics of the act say that it implicitly legalizes discrimination. "I think the fundamental question in some of these laws is should someone be discriminated against because of their religious views,” Rubio told FOX News.

"Should someone who provides a professional service be punished by the law because they refuse to provide that professional service to a ceremony that that they believe is in violation of their faith? I think people have a right to live out their religious faith in their own lives," Rubio added.In his campaign announcement speech Monday evening, Rubio unsurprisingly spoke of his faith as both the basis of his campaign platform and his reason for running.“I recognize the challenges of this campaign, and the demands of the office I seek,” Rubio said from the podium. “But in this endeavor as in all things, I find comfort in the ancient command to, ‘Be strong and courageous! Do not tremble or be dismayed, for the LORD your God is with you wherever you go.’”As he often has in the past, Rubio used  “American dream rhetoric” to describe his childhood as the son of two Cuban immigrants hoping to achieve a better life for their family.“Their story is part of the larger story of the American miracle,” Rubio said from the podium. “How, united by a common faith in their God given right to go as far as their talent and work would take them, a collection of immigrants and exiles, former slaves and refugees, became one people, and together built the freest and most prosperous nation ever.”Rubio is a classic social conservative, a likely product of his faith-based background. In his speech, Rubio highlighted his belief that “that family – not government – is the most important institution in society,” and that stronger families will lead to a stronger nation. As is typical of religious US Christians, Rubio is a strong supporter of Israel. When Prime Minister Benjamin Netanyahu spoke to US Congress this past February, Rubio spoke out in favor of his controversial visit. “I can think of no nation on earth that needs our help more right now than Israel. And I can think of no people on earth that deserve our support more than theirs,” Rubio stated the Thursday before Netanyahu’s speech. “They are a reliable, strong, committed ally of this nation.”Furthermore, Rubio is seeking to have Israel’s right to exist included in any final nuclear deal with Iran—a stipulation of the deal first requested by Netanyahu .Rubio is the third Republican to enter the Presidential primary, after Ted Cruz and Rand Paul. The party favorite, Jeb Bush, is also from Florida, which may cause Rubio some issues garnering support from his home state. sign up to our newsletter