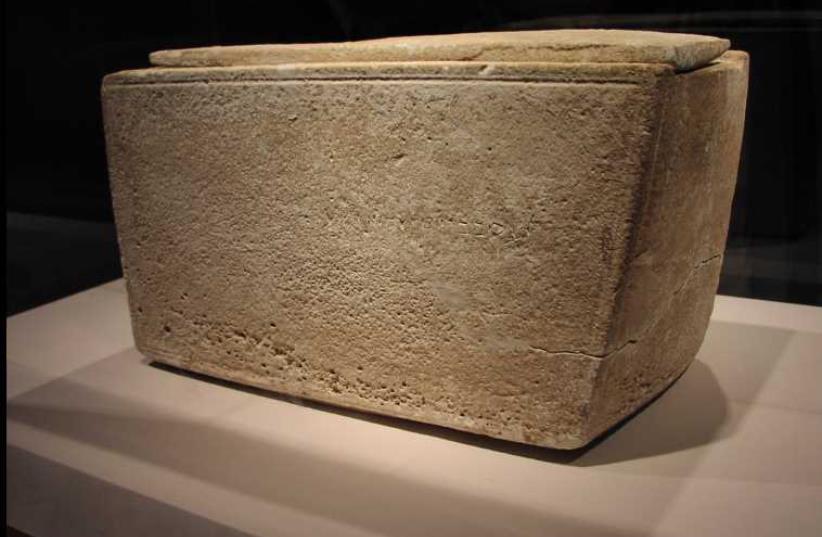 The James Ossuary with Inscription
(photo credit: LORI WOODALL)
Advertisement
An Israeli geologist believes he has found the tomb of Jesus in Jerusalem, and this time, the tomb of his supposed son is buried along with him.After 150 chemical tests, Canadian- Israeli filmmaker-journalist Simha Jacobovici and geoarcheologist Arye Shimron claim they’ve reached a scientific breakthrough with theological implications.The finding has been over 35 years in the making, amid court cases, legal restrictions and scientific and biblical pushback. Through methodical scientific testing, Shimron and Jacobovici say they were able to connect the James Ossuary – whose existence was announced in 2002 and containing inscriptions referencing the burial of Jesus – to the long-disputed “Jesus Family tomb” in the capital’s East Talpiot neighborhood – thus archeologically and statistically proving the existence of Jesus. 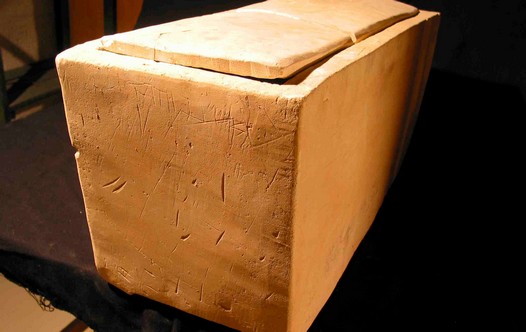 The discovery, according to the researchers, proves that Jesus was buried in Jerusalem along with nine other people, one being “Judah, son of Jesus,” another his supposed wife, “Mary” – an obvious affront to the common-knowledge New Testament theology. “He [Shimron] has made what I think is a huge discovery,” Jacobovici told The Jerusalem Post. “I have been following him and his work for the past seven years, this is not an overnight thing.”Shimron’s work has linked together two findings that on their own hold less significance, but when put together they lead to what Jacobovici calls “an archeological slam dunk.”The story began with the 1980 discovery of the Talpiot tomb, otherwise known as the “Jesus Family Tomb.”During the construction boom in Jerusalem at that time, it was not considered controversial, as more than 800 tombs were unearthed, most dating back to the Second Temple period and the time of Jesus.The bones in the tomb were in boxes known as ossuaries, with multiple ossuaries in one tomb. Three thousand ossuaries from the Second Temple period have been found to date – 2,000 are in possession of the Antiquities Authority, but the rest are in private ownership, many sold by vendors in the Old City.Around 20 percent of the ossuaries have inscriptions on them. In the tomb found in East Talpiot there were numerous inscriptions that fit the story of Jesus. One ossuary was a box with the inscription “Jesus, son of Joseph.” Next to it there were “Maria,” “Joseph,” another “Mary,” “Yose” (a name associated in the New Testament with the brother of Jesus), “Matthew” and most controversially of all – “Judah, son of Jesus.” For 16 years the relics lay with the Antiquities Authority, unreported and disregarded, due to the lack of proof backing its possible significance. After all, Joseph, Mary and Jesus were all common names at the time.Jacobovici was producing a documentary on the artifact, and went to a statistician from the University of Toronto, who told him those names each separately composed approximately 8% of the population. But of that population who had the common names, a very small percentage had a mother named Mary and a brother named Joseph. Jacobovici was sure there was something more here. So he had the patinas of the tombs scraped and analyzed, searching for links proving or discounting the New Testament connection.“But there was something here that becomes theologically upsetting to Christians,” Jacobovici said. “Many people believe that Jesus spiritually rose to heaven. But many others believe that he stood up, left the tomb, and physically went up. But now there’s a bone box here with his tomb, thats not good.” 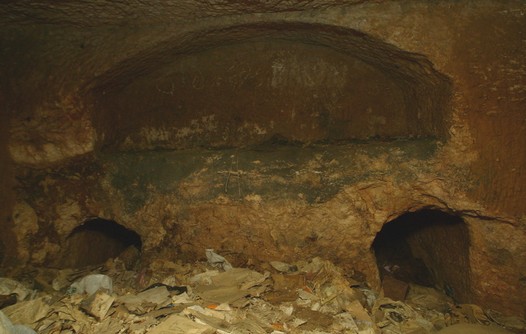 Work on the findings came to a halt in 2007 when archeologists deemed the chances too slim for the story to be real.Jacobovici’s documentary The Lost Tomb of Jesus, produced by James Cameron (Titanic) was first broadcast on the Discovery Channel in 2007.The second prong of the mystery emerged in 2002, with the discovery of a bone box in the private collection of Oded Golan, the largest collector of biblical ossuaries in the world.While examining Golan’s collection, an academic from the Sorbonne found an ossuary with the inscription “James, son of Joseph, brother of Jesus.” This is became known as the “James Ossuary.” At the time it made headlines as the first archeological evidence that Jesus existed. The hype grew around the discovery, until the story came crashing down when Golan was accused of forging the inscription. Shimron and Jacobovici linked up on the project and began their search for more evidence. If the James Ossuary originated from the “Jesus Family tomb,” it was possible that the ossuary held the bones of Jesus’s brother. They knew the chances were near statistically impossible, but continued pursuit.The authority declared the “brother of Jesus” part of the inscription a forgery and pressed charges against Golan. After seven years, a Jerusalem court found him innocent.Golan spent seven years on trial on charges of forging the inscription on the ossuary. He was found innocent in 2012.Just two weeks ago, Shimron received access to the James Ossuary, enabling him to cross-reference findings between the two tombs.Shimron said that testing the patina, as Jacobovici did, was not enough to prove the scientific connection, as the surface of patinas could be contaminated.He scraped underneath the patinas of the box to get into the ossuary itself. He ran approximately 200 tests on the chemistry of the samples from 25 different ossuaries. As Shimron did further tests, the results for magnesium, silicon and iron matched up. It seemed statistically too good to be true.He found that the Talpiot tomb had a unique chemical signature and that the random samples did not match that signature, but that the James Ossuary did. He also found that the soil that had seeped inside it, perfectly matched the soil that seeped inside the Talpiot ossuaries, including the “Jesus Family tomb,” thus illustrating that the James Ossuary spent most of its existence in the East Talpiot location.“This find illustrates that the James Ossuary is authentic and the Jesus Family tomb indeed belongs to the family of Jesus of Nazareth,” Jacobovici said.Today the Talpiot tomb is sealed underground between apartment buildings in East Talpiot, and its ossuaries are back with the Antiquities Authority. The James Ossuary is with its owner, Golan, who according to The New York Times, keeps the box in a secret location.The findings of the James Ossuary and the “Jesus Family tomb” have the ability to shake up the Christian debate, and Shimron and Jacobovici are well aware of that. They expect the Christian community to not take well to the findings, but they argue that their research is purely scientific, and not theological, in nature.If true, not only do the findings prove Jesus’s existence and burial in Jerusalem, but they also lead scientists to believe he was buried with his supposed son, Judah. The case has already aroused international interest, after The Times devoted an Easter Sunday feature to the claims.In response to the finding, Prof.James Tabor from the University of North Carolina at Charlotte said that scholars should take these kinds of findings as historical data. He believes that archeologists, geologists and scholars should remain in search of truth and fact. “If in fact Jesus’s tomb is found, the procedures would be no different than the discovery of any other tomb,” Tabor said. “But in the case of Jesus everything changes, because he is such a lightning rod figure for so many people – because if you find the bones of Jesus in a tomb then he did not rise from the dead.”This discovery would be a concern for evangelicals, Protestants, Roman Catholics, even the Vatican, due to its contradiction of their faith.“There are lots of more modern Christians who view the resurrection as more spiritual, and as a historical and scientific event that doesn’t threaten the faith,” Tabor said. “But for most it is very controversial, let’s face it. With the James ossuary says ‘James, son of Joseph, brother of Jesus.’” “It doesn’t necessarily contradict biblical findings, but it contradicts faith more,” he said.
sign up to our newsletter