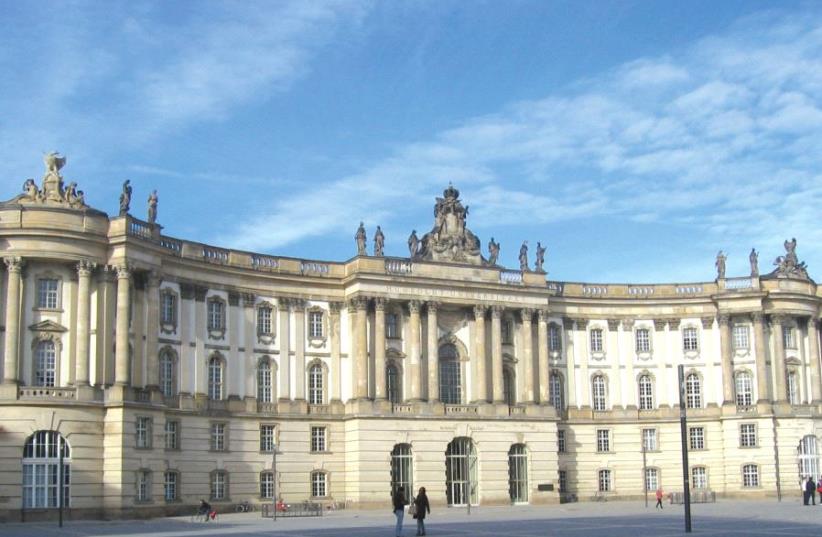 THE FACULTY OF LAW building at Berlin’s Humboldt University.
(photo credit: Wikimedia Commons)
The Berlin-based Humboldt University, which expelled Jewish academics and students during the Nazi-era, is slated on Wednesday to host an event with a pro-BDS academic who critics allege is antisemitic and has helped mainstream the delegitmization of Israel.The Humboldt University media spokesman Hans-Christoph Keller plans to moderate the panel titled “Who is an antisemite – a philosophical clarification of the concept.” The HU’s website lists a notice and registration for the Wednesday event with the anti-Israel academic Georg Meggle.In response to accusations that Keller and the event with Meggle stoke and tolerate modern antisemitism, Keller told the Post "cleary no." He added "The allegation of antisemitism is unfounded."Keller said "It must be within the scope of freedom of education in a democratic society to be possible on the basis of scientific arguments to discuss with each other in a fair balanced manner. Because this is not just the core of the scientific work processes, but also an important societal one and a task of every university."He refused to say if antisemitism is an opinion when asked.The Post also asked Keller if the HU is violating the mayor of Berlin's anti-BDS executive order, stating public facilities are banned from providing space to BDS. The HU receives public funds.BDS is an abbreviation for the Boycott, Divestment and Sanctions campaign targeting the Jewish state.Dr. Efraim Zuroff, the chief Nazi hunter for the human rights organization the Simon Wiesenthal Center and head of the organization's Jerusalem office, said: “Why would would a respectable university give a platform  to someone who supports BDS, which is a form of antisemitism, and any such lecture by a spokesman for that cause grants the legitimacy that this movement does not serve.”Zuroff confirmed to the Post that the HU is “making antisemitism politically and socially respectable.”Amid rising antisemitism and violence against Jews in Berlin, the representative to combat antisemitism for Berlin’s Jewish community, Sigmount A. Königsberg, told the Post that in connection with Meggle and the HU event: “The modern hater of Jews no longer says that he is antisemite. Rather, he gives free rein to his antisemitism, in which he calls himself an ‘anti-Zionist’ or ‘critic of Israel,’ but means Jews.”He added that “An anti-Zionist denies the Jewish people what is granted to all other peoples: the right to self-determination. If that's not antisemitism, then what it?”Alex Feuerherdt, an author of a book on UN-based antisemitism and leading German journalist writing on contemporary Jew-hatred, told the Post that "Georg Meggle has long been known for his negative attitude towards Israel. For example, 15 years ago he organized anti-Zionist lectures in Leipzig, where speakers with antisemitic positions were allowed to speak. "Meggle held an anti-Israel event with two antisemitic activists, one of whom, Hajo Meyer, has termed Israel a “criminal state” and equated the suffering of Palestinians to the persecution and mass murder of Jews during the Holocaust. The Dutch Jewish author Leon de Winter told the Post in 2011 that in Meyer's book about the "end of Judaism," an end he favors, he wrote that "the Jews' 'otherness,' like their dietary rules, caused antipathy already thousands of years ago.”De Winter added that “It is a fascinating and frightening way to survive – he is still the Nazi prisoner he once was by completely internalizing the Nazi’s hatred.”The Humboldt University student Henri Armke told the Post that "BDS and other antisemitic movements must not be able to get a place on campus or anywhere else. Therefore, some students will advise how they will react to Meggle's dangerous propaganda if this event is not canceled. That BDS, the current form of ‘Don’t buy from Jews!’, the Nazi slogan, 75 years after the liberation of Auschwitz, is given a stage, is a shame!"The Post sent a media query to Meggle who also teaches at the Cairo, Egypt branch of Leipzig University.
Dr. Elvira Groezinger, the deputy representative of the Geman branch of Scholars for Peace in the Middle East, appealed to the HU to cancel the event. She said "at the HU tomorrow, of all things, the BDS supporter and antisemite Georg Meggle is to discuss the freedom of science. Is this a preparatory event for the dismissal of students and teachers who reject this line?"
She added that "We had that before. The university's namesake turns in his grave! We appeal to the responsible persons to prevent this event in such a public space in accordance with the Bundestag resolution! Antisemitism and agitation against Israel have no place in the academic field."