Albanian man arrested in connection with murder of Israeli in Berlin

According to investigators, the suspect met Yosef Damari, aged 22, in a Berlin hostel last week and and is believed to have murdered him the following day. 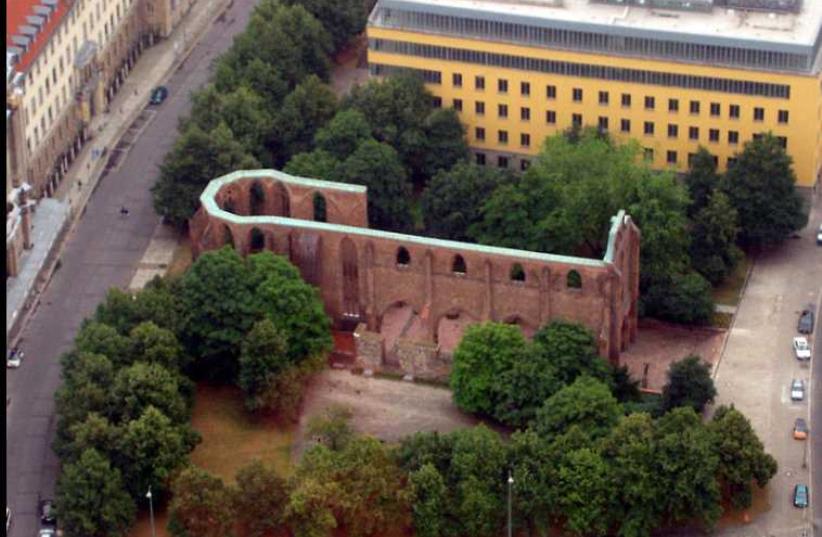 Ruins of Franciscan Monastery in Berlin
(photo credit: Wikimedia Commons)
A 28 year-old German national of Albanian descent was arrested  Friday in connection with the murder of an Israeli citizen in Berlin, German newspaper Der Tagesspiegel reported on Friday.Czech authorities arrested the suspect on Friday near the border with Germany and will proceed with extradition protocols. According to investigators, the suspect met the Israeli, Yosef Damari, aged 22, in a Berlin hostel last week and is believed to have murdered him the following day. The Chabad rabbi in Berlin, Yehuda Teichtal, said the man to whom the passport belonged was supposed to celebrate the Passover Seder at the local Chabad house on Friday night but never arrived. A spokesman for the Israeli embassy in Berlin told AFP that Damari had sought aid from the embassy because he lacked funds to purchase a ticket back home, adding that Damari requested that the embassy contact his family in Israel."The dead man had visited the Israeli embassy on Good Friday and we helped him with a few matters." "Our consul general is in close contact with the Berlin police and our staff is also in contact with his relatives in Israel," the spokesman added.  Damari's body was found with his Israeli passport on Easter Sunday in the ruins of a Berlin church where the murder is believed to have occurred on Saturday. Initially, definitive identification was rendered difficult due to the victim's considerable injuries. Berlin Prosecutor Martin Steltner claimed that there was no indication of a robbery prior to or after the murder, but also suggested that there was no evidence to suggest that the murder was politically motivated.