The sticker was cut to perfectly fit the stone and read a message in German: “The murderer always returns to the scene of the crime.” 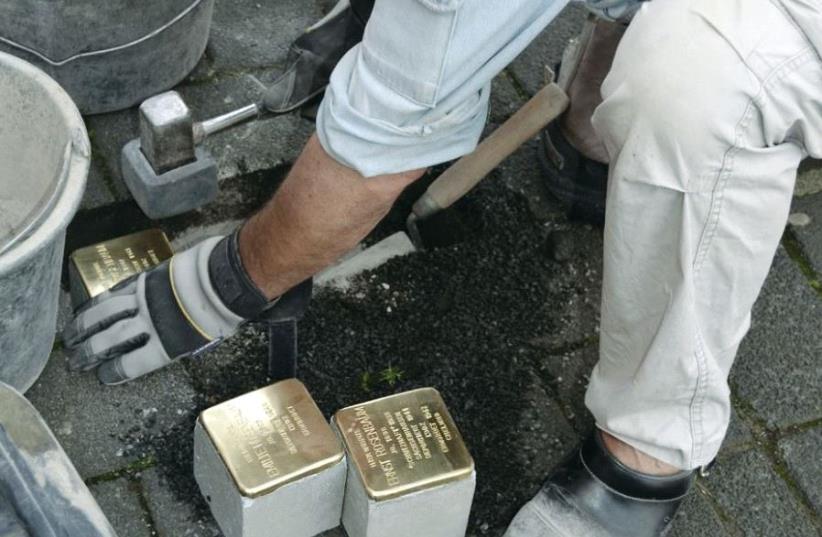 Artist Gunter Demnig lays Stolpersteine, small brass plaques that commemorate victims of the Nazis, in Cologne in 2015
(photo credit: KARIN RICHERT)
Advertisement
A stolperstein (“stumbling block” in German) commemorating a Holocaust victim was defaced in Rome, the Italian daily Corriere della Sera reported on Thursday. The stolpersteine are memorial engraved brass stones placed in front of Holocaust victims’ former residences. The art project was created in 1992 by German artist Gunter Demnig. Each stone features the name, year of birth, date of arrest and fate of the person honored. There are currently about 70,000 stones in 21 countries in Europe.Two hundred and eighty-eight stolpersteine can be found in Rome. In the night between Monday and Tuesday, someone placed a black sticker on a stone located in the city center, just meters away from Portico D’Ottavia, the heart of the ancient Jewish Ghetto. The sticker was cut to perfectly fit the stone and read a message in German: “The murderer always returns to the scene of the crime.”According to the Corriere della Sera, the Italian authorities are investigating the incident.“This is not vandalism, this is a provocation,” the Chief Rabbi of Rome Riccardo Di Segni told the Italian daily. “I am thinking of the place chosen by these people to do what they did: Via della Reginella [ the street where the stone was defaced] is not any street, it was a key site for the deportation of the Jews of Rome.”Other memorial stones in the city were already targeted in the past: among others, 20 stolpersteine in the Monti neighborhood were stolen in December 2018. In a separate incident reported by the Italian press on Thursday, numerous swastikas and Celtic crosses graffiti appeared around the town of Fiumicino, which belongs to the metropolitan city of Rome. Many of the graffiti defaced the leaflets displaying poetry that a group of anonymous local young had plastered to cover swastikas and other hate symbol graffiti in Fiumicino earlier this week.  Rabbi Di Segni told the Corriere della Sera that he would address the Jewish Community of Rome on Thursday night at an event to mark the Hebrew date anniversary of the victory over the Nazi-Fascists in World War Two. “I will tell them that the fight is not over,” he added.