More than 2,500 seats were available at Temple Emanu-El, with tickets prices starting for less financially endowed congregates at $875. 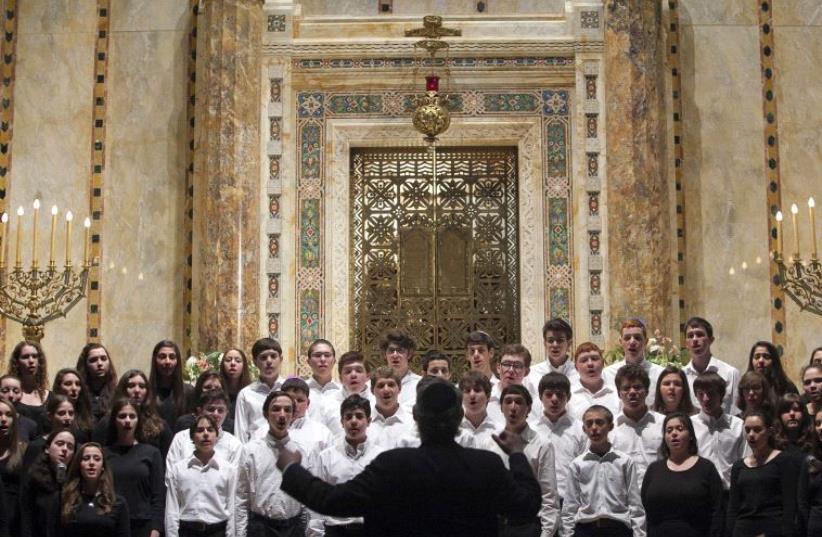 HaZamir International Jewish High School Choir sings at the Temple Emanu-El during the annual Holocaust Remembrance Day in New York April 7, 2013
(photo credit: REUTERS)
Advertisement
Tradition holds that on Rosh Hashana apples should be dipped into honey signifying the hope that the new year will be sweet. But some in New York's Jewish community were left with a bitter taste in their mouths this Sunday after discovering what one synagogue charged for its holiday services.Temple Emanu-El is being accused of instituting a "pay to pray" policy during the High Holy Days, charging congregants over $3000 for the privilege of sitting in the front ten rows following Sunday night's new year celebration, according to The Telegraph.Founded in 1845, the posh Fifth Avenue synagogue caters to some of New York's most prominent figures, including former mayor billionaire Michael Bloomberg and CNN President Jeff Zucker. The late comedian, Joan Rivers, was also a member. The price of admission to Sunday's service, according to the New York Post, was $3,275, well over double the cost for a ticket to the smash Broadway musical Hamilton. Box offices last priced the theater production at $1,502.   More than 2,500 seats were available at Temple Emanu-El, with tickets prices starting for less financially endowed congregates at $875.But some New York rabbis have called the price "offensive," claiming that setting up financial barriers hurts the greater community.  “We are hemorrhaging Jews and we have to put absolutely no obstacles for ones who want to show up on the High Holy Days,” Rabbi Judith Hauptman of Ohel Ayalah told The Telegraph.Rabbi Yehuda Lipskier, of the Chabad Jewish Center, said that although the Temple Emanu-el had the right to charge admission, he would find it difficult to turn away congregants wanting to pray. “Synagogues are free to charge, but to make it mandatory — that’s not the way we do it,” he said.“It’s a free country. They can charge $3,000 a ticket. But if somebody comes up to the door and says, ‘I want to come in and pray’ and they say, ‘No, you don’t have a ticket,’ I have a problem with that.”