On Monday at least 10 Jewish community centers were targeted with bomb threats, for the fourth time in five weeks. 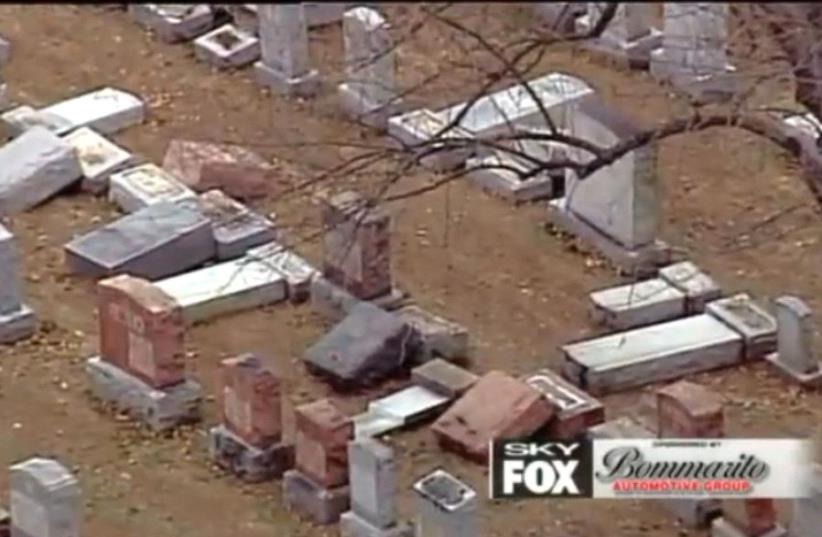 FOX2NEWS broadcasts footage of vandalized headstones at a St. Louis area Jewish cemetery
(photo credit: screenshot)
Advertisement
Vandals damaged and knocked-over more than 100 headstones at a St. Louis-area Jewish cemetery.FOX2NOW, a local TV station, reported that police in University City, Missouri, were on Monday reviewing footage from surveillance cameras in the area of Chesed Shel Emet cemetery, which has served the community since 1893.The station quoted police as saying that it was likely there was more than one perpetrator. The police have not yet confirmed whether the incident is being considered a hate crime.

Another revolting manifestation of #antisemitism on same day when we're dealing with #bombthreats. Long overdue for our leaders to lead. https://t.co/hBuwxMAom6

The threats have been called in to JCCs across the country, according to Paul Goldenberg, the director of Secure Community Network — an affiliate of the Jewish Federations of North America that advises Jewish groups and institutions on security. News reports indicated that threats were received by JCCs in Whitefish Bay, Wisconsin; St. Paul, Minnesota; Houston, Texas; Milwaukee, Wisconsin and Birmingham, Alabama.The threats were called in on Monday morning. It is not known if they were live calls or recorded.“It appears to be the same serial caller” as in the prior incidents, Goldenberg told JTA.Goldenberg said that some of the JCCs were evacuated and others were not.“The JCCs are very well equipped to handle this,” he said.Goldenberg did not confirm where any of the threats occurred, saying they took place across the country and that his office “is monitoring the situation.”Goldenberg said the fact that the threats were made on Presidents Day, when more people might be in the buildings during the daytime, does not appear to be a factor in the threats.The White House responded to a reporter’s query about the latest string of bomb threats called in to Jewish community centers by saying “these actions are unacceptable.”“Hatred and hate-motivated violence of any kind have no place in a country founded on the promise of individual freedom,” reads a statement, attributed to White House press secretary Sean Spicer, that was shared Monday afternoon by NBC News correspondent Peter Alexander. “The President has made it abundantly clear that these actions are unacceptable.”The statement did not specify that the threats targeted Jewish institutions, although it came in reply to a query about threats to JCCs.Alexander posted Spicer’s response on Twitter, adding,  “@PressSec responds to my request for comment about wave of threats to Jewish community centers.”The  Harry and Rose Samson Family Jewish Community Center in Whitefish Bay, Wisconsin was evacuated at about 10:30 a.m. on Monday, and reopened at about 3 p.m., an hour after police and FBI officers said that everything was clear, according to local reports. A message on the JCCs website read: “The JCC is currently closed and safely evacuated.” It is the second time in recent weeks that the JCC has been evacuated due to a bomb threat.The Jewish Community Center in St. Paul, Minnesota, including an early childhood program, also was evacuated on Monday morning, according to Minnesota Public Radio. The students at the center were moved to a nearby fire station while police cleared the building and investigated.On Jan 31, some 17 JCCs across the United States were targeted with bomb threats. On Jan. 18, some 30 Jewish institutions in at least 17 states received bomb threats. On Jan. 9, such threats were called into 16 JCCs across the Northwest and South, forcing the evacuation of hundreds.
Advertisement
Hot Opinion