The measure was introduced by Christian Imark, a National Council deputy from the conservative Swiss People’s Party. It passed 111- 78. 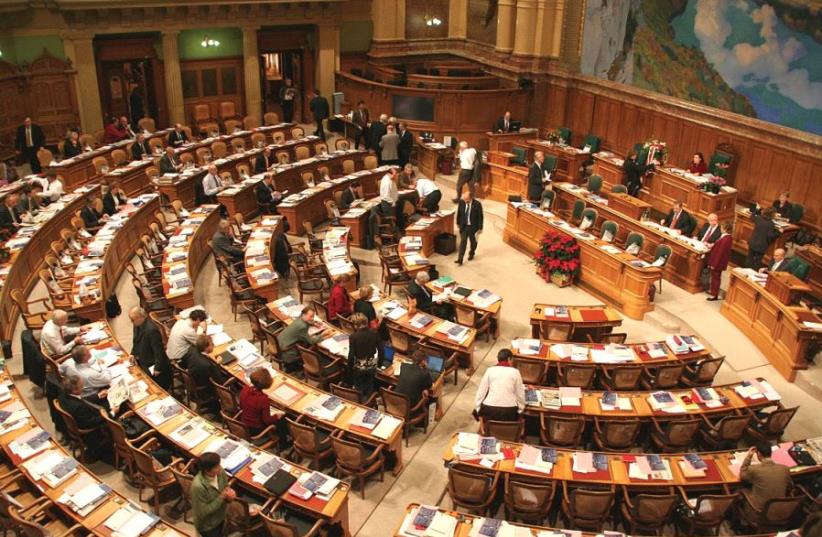 SWITZERLAND’S National Council meets in Bern
(photo credit: Wikimedia Commons)
Advertisement
Switzerland’s National Council – the lower chamber of the legislature – passed a bill on Wednesday to stop government funding of organizations that promote boycotts of Israel and spread antisemitism and racism.The measure will be submitted in May to the Council of States, the upper chamber of the legislature, which will decide whether it becomes law.Olga Deutsch, director of the Jerusalem-based NGO Monitor’s Europe Desk, told The Jerusalem Post: “Today’s positive developments in Switzerland mark a milestone in seriously countering BDS campaigns, antisemitism and hatred, by equating them in the motion. The motion sets an important precedent. NGO Monitor was instrumental in providing details to Swiss decision-makers regarding their government’s funding of organizations that oppose official Swiss foreign policy, such as NGOs that propagate anti-normalization, BDS, and one-state frameworks.”She added, “This is a perfect opportunity for Israeli and European officials to capitalize on the Swiss example and work together on guidelines and evaluation mechanisms that contribute to positive change in addressing this serious issue.”The measure was introduced by Christian Imark, a National Council deputy from the conservative Swiss People’s Party. It passed 111- 78.Dominik Feusi, a senior editor with the Basler Zeitung newspaper, first announced the groundbreaking motion on Twitter, writing “Swiss parliament approves a Motion to end funding of NGOs who work for terror, hate, racism or antisemitism...”


Imark’s motion to slash funding for organizations that boycott Israel appears to the first national parliamentary act in Europe to blunt economic and political warfare targeting the Jewish state.The head of the Federal Council, Didier Burkhalter from the FPD Liberal party, opposes the measure. According to an article in the Zurichbased Weltwoche weekly, Burkhalter, who oversees the Swiss Federal Department of Foreign Affairs, blames only Israel for the collapse of the peace process.Feusi published a series of eye-popping investigative reports over the past year on alleged financial misconduct in the Federal Department of Foreign Affairs. The Swiss government provided funds in December to the US- and EU-designated terrorist organization Hamas for a conference in Geneva. Switzerland’s government funneled nearly $60 million to diverse projects in the Middle East, many of which are shrouded in secrecy.Swiss government money flowed to the Badil Resource Center for Palestinian Residency and Refugee Rights, which advocates the boycott of the Jewish state. Switzerland – in contrast to the US, Canada and the EU – does not recognize Hamas and Hezbollah as terrorist organizations.Switzerland also funds the Palestinian Center for Human Rights, which routinely calls for the arrest of Israeli politicians and compares Israel with the former apartheid regime in South Africa, and Al-Haq, a Ramallah-based legal center that engages in lawfare against the Jewish state.According to NGO Monitor: “The Swiss government, directly through the Human Rights and International Humanitarian Law Secretariat (managed by the Institute of Law at Bir Zeit University in Ramallah and the NIRAS consulting firm in Sweden), provides core-funding to a network of organizations, some of which are directly affiliated with the Popular Front for the Liberation of Palestine, a terrorist organization designated as such by the US, EU, Canada and Israel.”NGO Monitor continued: “From 2013 to 2016, the IHL Secretariat provided a total of $2.38m. to organizations directly affiliated with the PFLP, while the Swiss government’s contribution amounted to approximately one-quarter of the total secretariat budget. The IHL Secretariat distributes 56% of its budget to NGOs that advocate for Boycott, Divestment, Sanctions campaigns against Israel.”Silvia Müller, a spokeswoman for the Federal Department of Foreign Affairs, told the Post that “Switzerland decisively condemns calls for hate, violence, forms of racism and antisemitism.”She said that “Switzerland works together with organizations that uphold democratic values and principles and work for human rights and humanitarian international law.”BDS Switzerland slammed the anti-boycott motion because “its goal is to ban financial support for human rights organization in the context of Israel/Palestine.”The group said the motion is an attack on the Palestinian population, freedom of speech and organizations that work for human rights.